Imagine being a 15-year-old sophomore in high school terrified that your parents will be deported. Imagine being so scared that you don’t leave the house. You stop going to school. You keep silent about your fears because you think you don’t have anyone to talk to. Imagine the challenge of carrying that physical and emotional fear day after day. Then, imagine someone coming to your aid and handing you tools to prepare for this worst-case scenario. The weight on your shoulders is decreased. You leave the house and return to school because you have a plan. First year College of Charleston student Jody Bell is that someone.

It all started in 2016. Bell was a sophomore in a high school outside of New York City that had a large population of immigrants, when she began to notice that her classmates weren’t showing up to school. When she started asking questions, she discovered they weren’t coming because they were worried their parents would be deported. That’s when she came up with the idea to create the website I.C.O.D: In Case of Deportation to educate immigrant students about their options and provide tools for a plan of action.

It didn’t take long for Bell’s work to get noticed, and a guidance counselor at her school nominated Bell for Girls With Impact, a 12 week expert-led entrepreneurship program that helps teenage girls create businesses, nonprofits or projects that will affect the world and their success in life. Upon completion of the program, Bell officially launched the I.C.O.D. website. Geared toward kids ages 8 to 18, the site explains what deportation is, how to talk to family members, what their options are if a parent or guardian is deported and what should be considered when making a deportation preparedness plan. The press release that announced the launch of the website was picked up by the Associated Press, a story ran in the New York Daily News and within hours, the website blew up. 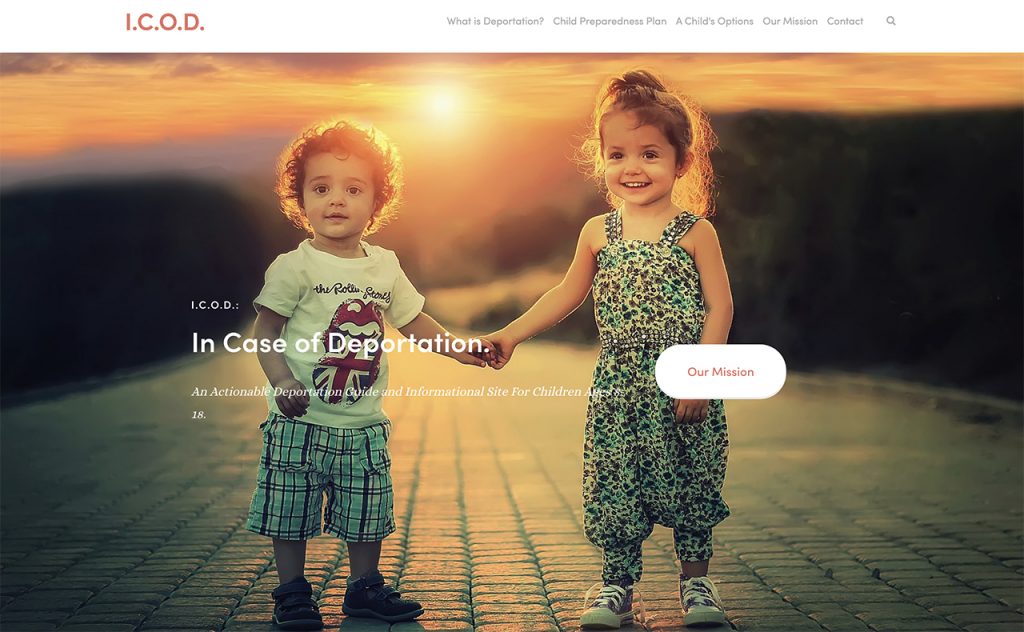 Homepage image of the I.C.O.D.: In Case of Deportation website.

“A mother wrote to me to tell me how reading the information on I.C.O.D helped her talk to her kids about their father. He had been deported two years ago, but she hadn’t told them the truth because she was scared,” Bell says. “The unfortunate reality is that there are no good options. You can either leave with your parents and return to a country where you may be faced with violence and poverty, or stay behind with a guardian. It’s a terrifying process.”

Since she arrived at the College in the fall of 2019, Bell, an Honors College student majoring in international business, has been awarded the Jordan Rively Scholarship and the Guy E. Beatty Scholarship. Most recently, she was named a 2019 Stuart M. Williams Impact Scholar, a scholarship program designed for exceptional undergraduate students who want to be impact leaders. The Impact Scholar program fosters professional development by providing students with challenging, extracurricular opportunities in the business community. As an Impact Scholar, Bell wants to learn how to make legal services less expensive and develop an app to simplify the process of creating a preparedness plan.

“Jody inspires us, and she is a terrific ambassador for our Honors Entrepreneurship Living-Learning Community. We are delighted that she will be able to leverage the combined resources of the Stuart Williams Impact Scholar program and the Honors College Scholar-Citizen Initiative, a group that works to democratically channel the commonwealth of Honors students’ passions and skills into action via impactful programming,” says Lancie Affonso, Honors College faculty fellow and director of the Honors Entrepreneurship Living-Learning Community.

Bell says regardless of who is sitting in the Oval Office, the issue of immigration isn’t going away. “There is just going to be more and more deportation because of the influx of immigration, and we have to figure out ways to remedy the situation as humanely as possible.”