I teach a First Year Seminar class at the College of Charleston called “Apocalypse to Warp Drive,” subtitled “Physics in Film.” The basic approach of the course is to use scenes from popular movies as a vehicle for studying the fundamentals of physics. The course includes weekly “feature films” on the physics topics being covered. In recent iterations of the course, one of those feature films has been a new release seen in theaters by the whole class (graciously funded by the CofC Office of First Year Experience). This year, the new release was Ad Astra, which, by the way, is a fantastic title for a movie. It’s Latin for “to the stars,” though it is commonly part of a longer phrase, “ad astra per aspera” or “to the stars through hardship.”

Having seen the film with my class, I was asked to write a review of its scientific content. Let’s start with the fact that the plot of the movie centers around a mission to answer one of man’s ultimate questions – are we alone in the Universe? That is a question mankind has been pondering in one form or another at least back to the time of ancient Greece, but only in the last century or so have we developed the technological tools to really begin to try to answer it. The movie imagines a “not too distant future” in which that capability has been pushed forward considerably.

The first evidence of this comes in the opening scene of the movie when the main character, Roy McBride (Brad Pitt), climbs out a portal to work on the International Space Tower, a kind of space-station-like platform, but on really, REALLY tall stilts. We’re talking tall enough that the station tower appears to extend at least into Earth’s stratosphere (roughly 30 km above the ground). For reference, the tallest manmade structure in existence today is the Burj Khalifa in Dubai, which is about 830 m tall, less than three percent of the apparent height of the Space Tower. Why anyone would want to build a space tower instead of a space station is never addressed in the movie.

The purported purpose of the Space Tower is to communicate with alien civilizations, should any exist. Why the Space Tower needs to be built so tall isn’t explained, though presumably it’s so that Earth’s atmosphere won’t interfere with the communications. Earth’s atmosphere is opaque to certain types of radiation, such as gamma rays, X-rays, and most ultraviolet radiation, all of which is good for those of us living on the surface of this planet. But that would be bad if alien life forms were trying to communicate with us using these types of radiation. However, NASA and many other space agencies already have telescopes in space monitoring for UV, X-ray, and gamma ray emission, not so much from aliens as from natural sources such as stars, galaxies, and black holes. So, receiving a signal wouldn’t be a problem, but presumably, the Space Tower would give us the capability to answer any messages we receive. 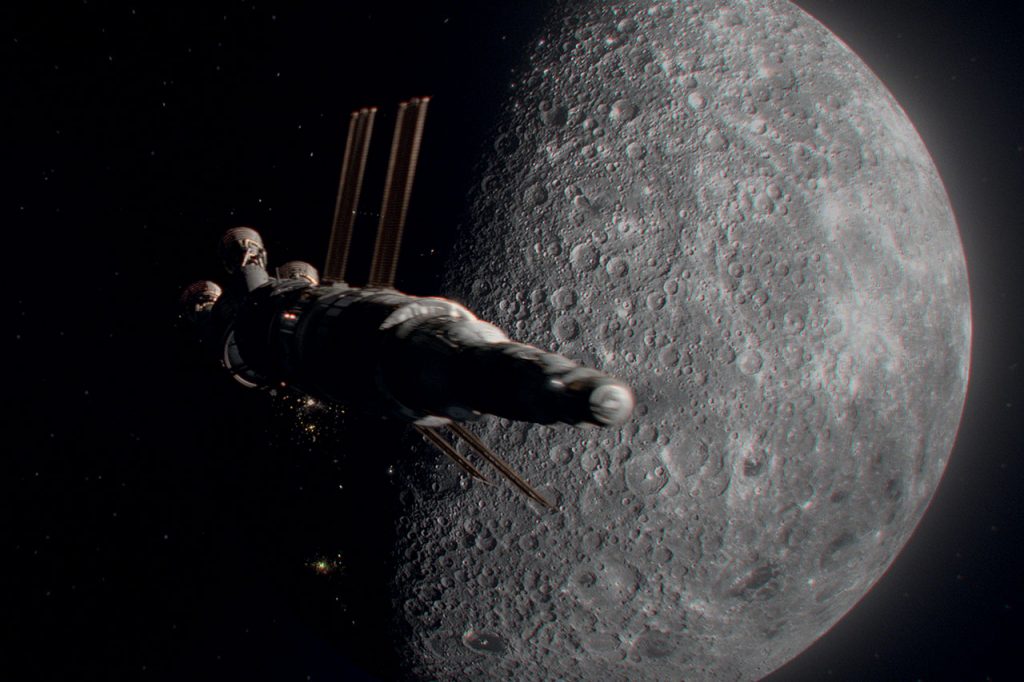 While the Space Tower is there to communicate with extraterrestrials, another mission in the movie, the Lima Project, is designed to actively look for signs of intelligent life beyond our solar system. For reasons that are not very well justified in the movie, this project is stationed out in the outer parts of our solar system, absurdly close to Neptune as it turns out. Why that’s better than somewhere closer to Earth is hard to fathom.

The other thing that this movie, like many others, fails to appreciate is that the vast majority of space exploration missions are unmanned. There are a whole host of reasons for this: people don’t tolerate space very well, people are expensive, people need to be fed, they need water, they have to take breaks from time to time. For monotonous tasks like combing through 300 billion stars looking for evidence of extraterrestrial life, machines just do the job better. And people on Earth can always check what the machines are doing without actually being right next to them. Heck, the Opportunity rover drove around Mars for almost 14 years controlled by commands sent from people back on Earth. Without giving away too much of the plot, the climatic scenes in Ad Astra provide additional reasons why maybe it would be better not to send people on long, lonely missions to the outer solar system.

In a similar vein, the movie never made clear why Roy McBride needed to travel to Mars in order to attempt to contact his father who was on Project Lima out beyond Neptune. One possibility is that the writer assumed that since Mars is further from the Sun than the Earth, then it must be closer to Neptune. This would be true if all the planets were neatly lined up on one side of the Sun, but they generally aren’t. They orbit around, such that the relative distances among the planets depend on where they all are in their orbits. If Earth and Neptune are both on the same side of the Sun with Mars on the opposite side, then, in that instance, it would be faster (and certainly cheaper) to call Neptune directly from Earth.

Another issue with the phone call to Roy’s dear, lost daddy is that it’s going to be a slow conversation. That’s because the light travel time from Mars to Neptune (how long it would take a signal to get there) would be about 4 hours. A reply would take another 4 hours to travel back. If Roy McBride sent his father a message at the start of the workday, then he shouldn’t expect an answer before the end of the day. So, why was everyone standing around like they were waiting for something?

Another common misconception in space movies has to do with how crowded or empty space is. People just don’t seem to appreciate just how BIG space is. Like, REALLY big. Those rings of Neptune? They are probably made up of maybe a trillion particles larger than 1 cm. That sounds like a lot of particles, but they are spread over a volume of roughly a billion billion m3. That means EACH PARTICLE occupies a volume of a million m3, all by itself. Put another way, the average distance between particles (larger than 1 cm) would be about 100 m (a whole football field between each pebble that makes up the rings!). In the scene where Roy McBride needed to fly through the rings, he wouldn’t have needed his shield; he’d have had to be extremely unlucky to hit even one particle.

I’m going to end with a common complaint about so many of the movies we watch in class – why is it that nuclear bombs are the solution to all problems? In the particular case of Ad Astra, Roy McBride uses a kick from a nuclear explosion to propel his ship back home. This is implausible for a number of reasons, but just looking at it from an energetics perspective, a large nuclear warhead from the current U.S. arsenal would have about 1 megaton (4 thousand trillion Joules) of potential energy stored in it. If we are generous and assume ALL of that potential energy gets converted into the kinetic energy of McBride’s ship, then assuming the ship has a mass only three times that of the lunar module the Apollo astronauts rode to the Moon, then McBride’s ship could reach a max speed of 830,000 km/hr, which seems fast, but at that rate, it would take him 215 days or about 7 months to reach Earth – plenty of time to contemplate his (mis)deeds.

Ad Astra, like so many movies before it, has played fast and loose with the laws of physics. The sad thing is, it doesn’t have to be that way. There are many good movies that also have good science. My favorites include 2001: A Space Odyssey, Contact, The Martian and Interstellar.

P. Chris Fragile is a physics and astronomy professor who teaches Apocalypse to Warp Drive: Physics in Film. Ad Astra was one of the films his class studied this past fall.