Professor’s Research Goes With the Flow

When Ana Oprisan isn’t investigating critical and supercritical fluid properties on the International Space Station (ISS), she’s on campus leading undergraduate research in the Department of Physics and Astronomy.

With the help of the most recent microgravity experimental data from a mini-laboratory aboard the ISS, Oprisan’s students have co-authored peer-reviewed papers; presented at international, national, regional and local conferences; and received research awards from the South Carolina Academy of Science, Phi Kappa Phi, Sigma Xi, and the College’s School of Sciences and Mathematics and Department of Physics and Astronomy.

In non-Ph.D. terms, Oprisan and her students study the evolution of microscopic patterns in critical fluids during the transition from vapor to liquid. Supercritical fluids occur when distinct liquid and gas phases do not exist. At the supercritical state, these fluids can flow through solids like a gas and dissolve materials like a liquid. 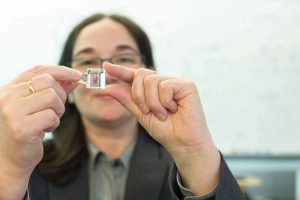 This research is important because supercritical fluids are used in the food industry for processes like the decaffeination of coffee or flavor extraction from plants. These fluids are also leading the way for nonpollutant solvents in the green chemistry movement. Space exploration relies on hydrogen and oxygen stored in supercritical state.

“I study the properties of fluids, such as viscosity [how easy they flow], thermal conductivity, diffusion and compressibility,” says Oprisan. “These properties are very important for the practical design of future devices both in green chemistry and space exploration.”

She and her students are currently studying the diffusion of gold, silver and iron oxide nanocolloids for their potential applications in medicine as transporters of drugs through the bloodstream. This can be used to target specific points in the body, which could be useful in cancer research.

Basically, Oprisan and her students are looking to save the planet and its inhabitants, while also helping to pave the way for future space exploration, one nanoparticle at a time.

Tagged with: 2020 winter • department of physics and astronomy • school of sciences and mathematics