Nick Velez started playing hockey when he was 8 years old. As he grew, so did his love for the game.

During middle school he joined a travel hockey team in his hometown of Monmouth County, New Jersey. As a student of Red Bank Catholic High School, Velez was a successful defenseman on his high school squad. When high school ended, Velez was ready for college, but he wasn’t ready to give up on hockey. After talking to some friends in his hometown, he found out he did not have to. 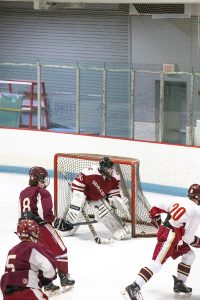 The College of Charleston club hockey team practices at the Carolina Ice Place in North Charleston. (Photos by Heather Moran)

Steve Barton has been the head coach of CofC’s hockey team for the past five years. He says he has seen a steady increase in the talent level of players during his tenure.

That talent level is evident on the ice. With a current record of 9-1, CofC already has big wins over Clemson University, the College of William & Mary, Old Dominion University and The Citadel. The College of Charleston is currently ranked in the top 10 in the southeastern region of the Atlantic Coast Collegiate Hockey League (ACCHL)  – their highest team ranking in 9 years.

Barton says that he likes the future direction of the team, noting, “I see this program growing to the point where our teams are going to the national playoffs on a regular basis.”

The program is experiencing its best season to date, sitting in sole possession of the top spot in the Carolina Division, with wins against the likes of the Citadel, East Carolina University, High Point University, Coastal Carolina and Appalachian State. Nonconference wins have come against Clemson, UNC-Wilmington (division II) and Elon. The program is now fighting for its first national title. In the first step to this goal the team is attending the American Collegiate Hockey Association South Regional Tournament in Tampa, Florida, on March 7-8, 2020.

For players like Velez, who is a junior majoring in public health, the competition and camaraderie are some of the biggest reasons why he is attracted to this team. Like a lot of his fellow teammates, he is not ready to say goodbye to the sport.

“This is kind of our last chance to play real organized hockey, so we are trying to make the most of it,” he says.

Today is #WorldMentalHealthDay! College is full of