By Amanda Kerr|2020-02-25T12:55:46-05:00February 5, 2020|Campus Life|Comments Off on CofC Pep Band to Debut New Fight Song
Cougars are tough competitors. With both natural abilities and finely honed skills, these cunning cats know how to wait until the right moment to make their move and prevail. So, it’s only fitting then that the College of Charleston Cougars should have a fight song that reflects the fierce nature of its mascot. That’s why, as part of the College of Charleston’s 250th anniversary, the institution’s pep band, Chucktown Sound, will debut a new fight song titled “Cougars Fight On!” during the Throwback Men’s Basketball Game on Saturday, Feb. 8, 2020. The game will begin at 4 p.m. in TD Arena. The fight song will be performed as part of the pre-game show. “I noticed when I first came here, we had the ‘Charleston’ as our go-to school song in the stands, which is great. It’s cute and endemic to here, for sure, but I didn’t hear anything that sounded like a traditional collegiate fight song,” says Director of Athletic Bands Christopher Gongora, who joined the College in 2018. “And having lyrics, having something that engages the fans where they can either sing or do a chant or spell out something – that unites them, and it gets everyone in the arena or on the field on the same page. And we just didn’t have that.” Gongora worked with a committee of administrators from across the College to develop guidelines and create both the music and lyrics for a new fight song. The College hired composer William Owens to write the music, but gave the opportunity of crafting the lyrics to members of the pep band. Students Katherine Jordan, Abigayle Phillian and Aidan “Miki” Leahy rose to the top as the three main pep band members to tackle the assignment. 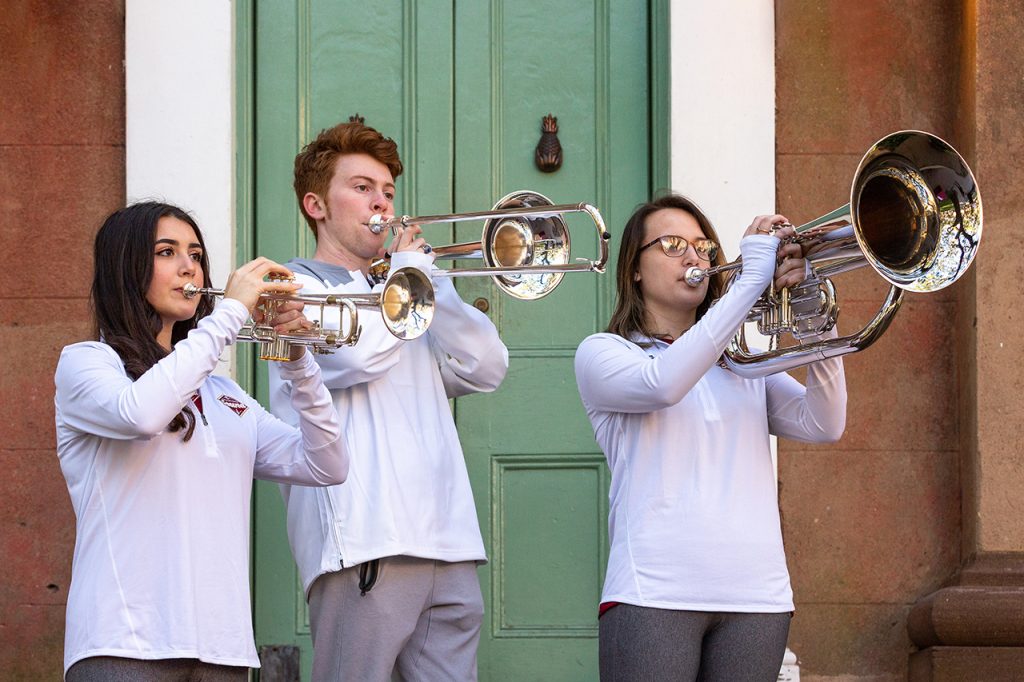 “What better group of students to decide the lyrics to the new fight song than those who would have to learn the notes to begin with,” says Gongora. “Band kids are always too busy playing the fight song. They never get to sing it. So, they’ll hear everyone else singing their lyrics as they’re sitting there playing the melody, which is kind of cool.” And it was the chance to make history at CofC with a new fight song that appealed to Jordan, Phillian and Leahy. “It was a unique opportunity that not very many people get anymore,” says Jordan, a freshman music major who plays euphonium in the pep band. “Almost every college or university has a fight song. This was a chance to create something no one has heard before.” Leahy, a senior majoring in marine biology who plays trombone in the pep band, also liked the idea of helping build school spirit. “School spirit is important to me. I think as a school we could do better,” he says, noting that there was an abundance of school spirit in his home state of Texas. “It’s something that I took for granted. So, helping create lyrics to a new fight song at the College of Charleston is a nice way to leave a mark on campus.” In fact, it was Leahy who developed what would become the chant verse of the song:

Brick by brick beat ’em back

Claws are out Cougs attack

Tough as oak, go for broke

“I was thinking about what would be fun to yell and something that would get people to actually participate,” he says.

Leahy’s verse is what set the tone for the entire set of lyrics. The students completed the five verses with one goal in mind – to create something that would bring the CofC community together. “I just want people to not be able to stop humming it, to not be able to stop singing it,” says Phillian, a sophomore majoring in French and foreign language education who plays trumpet in the pep band. “It’s something that brings everyone together. Everyone unites under a fight song.” And while the students are pleased with the final results, as is Gongora, they all say the real test of whether the new fight song is a success depends on whether it stands the test of time. “I think the deciding factor will be in five or 10 years, if I hear anyone yelling it – even just part of it – I think that will determine if it was a good job or not,” says Leahy.