Former College of Charleston president George P. Benson has completed the longest-ever term of chair of the Board of Directors of the Foundation for the Malcolm Baldrige National Quality Award. He was reelected three times as the 21st chair of the board, serving a total of seven years. 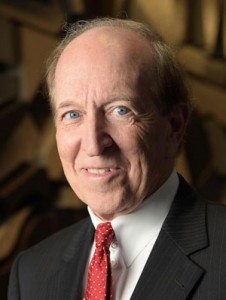 Kathryn Eggleston, president of Richland College in Dallas, Texas, succeeds Benson, who is currently a professor of supply chain and information management in the College of Charleston School of Business and will remain a board officer for the foundation in the role of immediate past chair.

The Malcolm Baldrige National Quality Awards are presented each year by the President of the United States to organizations that demonstrate superior quality and performance. Awards are given in the manufacturing, service, small business, education, health care and nonprofit sectors. The award is named for the late Malcolm Baldrige, a former U.S. Secretary of Commerce. The Baldrige National Quality Program is part of the National Institute of Standards and Technology. Each applicant for this award receives over 400 hours of rigorous review by independent experts.

Benson has been associated with the Baldrige Awards since 1997, when he was appointed as one of nine national judges. He is a former chairman of the board of overseers for the Baldrige National Quality Award.

Benson came to the College of Charleston to serve as president of the institution in 2007. He previously was dean of the University of Georgia’s Terry College of Business, a post he held from 1998 to 2007.  Prior to that, he served for five years as dean of the Rutgers Business School at Rutgers University. From 1977 to 1993, he was a faculty member in the Carlson School of Management at the University of Minnesota.