There are a lot of great lectures taking place this week during the College’s 20th installment of Darwin Week.

On Tuesday night, Feb. 11, 2020, for instance, in the School of Sciences and Mathematics (SSM)Auditorium, room 129, at 7 p.m., Saket Navlakha of the Salk Institute will talk how nature uses variants of traditional computer science in “Algorithms in Nature.” On Wednesday, Feb. 12, at 4 p.m. in the SSM Auditorium (and again on Thursday, Feb. 13, at 6 p.m. at The Citadel), Sigma Xi distinguished lecturer Nicolle Zellner will give a presentation on “Astrobiology: Life, the Universe, and Everything.” And CofC’s own Scott Persons, the new curator of the Mace Brown Museum of Natural History, sheds new light on “The Romantic Lives of Dinosaurs” on Friday, Feb. 14, at 4 p.m. in the SSM Auditorium. 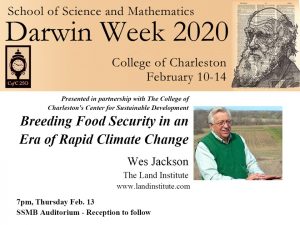 But perhaps the highlight of the week will come on Thursday, Feb. 13, at 7 p.m. in the SSM Auditorium when Wes Jackson, founder and president emeritus of The Land Institute, will discuss “Breeding Food Security in an Era of Rapid Climate Change.”

“He’s a brilliant scientist and one of the pioneers of sustainable agriculture,” says Todd LeVasseur ‘97, who oversees sustainability literacy in the Center for Sustainable Development, which is partnering on the event. “His scientific efforts may significantly play a role in our food options 20 to 30 years from now.”

Sustainable agriculture might not seem part of Darwin’s revolutionary theory of evolution by way of natural selection, but it most certainly is, says biology professor Jason Vance, who has been the event’s organizer for the last few years.

“The issue of food security, and other issues of sustainability, are intrinsic to the evolution and future success of our human species on this planet, to put it bluntly,” he says. “Charleston has emerged as the culinary capital of the south and holds pride in the farm-to-table movement, and revitalizing and reincorporating heirloom crops into our local food culture/industry.”

Vance adds, “Our community cares about our food, and should likewise be interested in understanding the challenges that will face agriculture over the coming decades – and the potential solutions to these challenges.”

Most of the foods we eat are based on a few key grains, and growing them requires annual hybrid seeds that require literally tons of toxic chemicals that poison the soil and water, as well as depleting the fossil water of Ogallala Aquifer, the vast underground reservoir that gives life to America’s breadbasket.

“This agriculture is by definition not sustainable, and thus contributes to food insecurity,” says LeVasseur. “Wes’ work, if adopted and scaled out, can significantly help to change all of that, thus leading to better food security. For example, one data point is that for each 1-degree Celsius temperature increase from global warming, we will have an approximate 10 percent reduction of agricultural production, especially in grains. That is a future of food insecurity, so his work can help create more resiliency in our agriculture.”