As we head into the next decade, the phrases “sustainable urban design,” “adaptive reuse,” “green urbanism” and “eco-district” will become increasingly relevant within the realm of city planning and building design.

With about 60 percent of all building and construction materials ending up in landfills in the United States, one of the most successful strategies for sustainable urban design is the adaptive reuse of existing buildings, providing profound ecological, economic, cultural and social benefits. That’s why students in the College’s Community Planning, Policy and Design (CPAD) graduate program take the course Sustainable Urban Design & Adaptive Reuse. 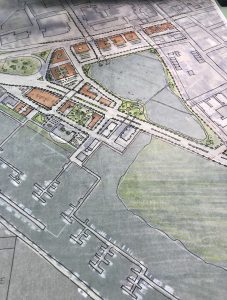 Taught by Allen Davis, director of Civic Design for the City of Charleston, students study areas of the Charleston peninsula that were previously highlighted in the City’s 1999 Downtown Plan, a document designed to recommend a “balanced and coordinated strategy” for development over the next 20 years. In Davis’ class, CPAD students are tasked with providing new ideas centered on resiliency and sustainability that were not fully conceived in the 1999 plan.

“Students have generated new urban design proposals that can be considered by the City and its partners as we further shape the growing districts,” says Davis. “These proposals involve new ways of thinking about green infrastructure, multimodal connections and building arrangement. The ability to think outside the box at the district scale can provide a unifying vision and design framework to facilitate sustainable urbanism.”

Graduate student Anne Tyler Howell relocated from Washington D.C. for the CPAD program. She was working for the American Institute of Architects at the time and was drawn to the program because it offered a good combination of policy and design classes.

“Having that combination of skill sets will open more doors and the City of Charleston is the perfect place to learn on the ground,’” she says. 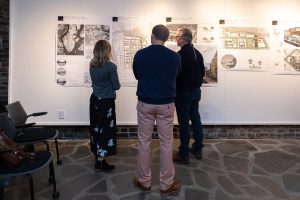 An open house for the students’ projects was held in December 2019 at the Charleston Civic Design Center. (Photos by Heather Moran)

For Davis’ class, Howell worked on a project that encompassed the 50-acre area of the peninsula that including the Charleston City Marina, the medical district and Alberta Sottile Long Lake. This area was referred to in the 1999 plan as “the front porch” of downtown Charleston. Howell used historic research in her project to determine how much of the area was infilled land and how she could re-activate underused space along the area’s waterfront.

Students’ final projects on these sites were presented in December 2019 to a jury of design experts, including local architects, urban designers and real estate professionals, at an open house in the Charleston Civic Design Center.

Kenneth Marolda ’19 was among the first group of students to graduate from the CPAD program. His project for Davis’ class, which he named “Cyclope Station,” looked to redevelop an old shopping center in the Maryville/Ashleyville area of West Ashley using “sprawl repair” techniques.

“First I had to determine which buildings were worth saving. Do they have unique architectural features? Connections to local history? How far along are they in their lifespan? Have they reached the end of their useful life or not?” says Marolda. “Then, I studied several different methods for adapting sprawl typologies; drive-through restaurants, motels, gas stations and strip malls. The goal was to make it a denser, walkable, multi-use community with retail, office, residential, civic and religious uses.”

Charleston Mayor John Tecklenburg has expressed interest in looking at the feasibility of some of the ideas that Marolda proposed in this project.

“We rely on civic design to make our public realm both beautiful and useful for our citizens,” Tecklenburg says. “It is clear from the work contributed through their studio classes that the Community Planning, Policy, and Design graduate program, that the College of Charleston is preparing students to meet the challenges of cities like ours.”