The team set record finishes in the Division 1 program’s history when it placed 13th in the jazz division and fourth in the hip-hop division at the event, which was held Jan. 17–19, 2020, at the Walt Disney World Resort in Orlando, Florida. As the most prestigious college cheerleading and dance team championship in the country, the event hosted 5,500 of the country’s top college cheerleaders, dancers and mascots from 242 teams from 42 states and 10 countries.

“I am extremely proud of this team because of their commitment, love and dedication to our program,” says Patrice Christian, the Cougarettes’ coach. “They work tirelessly to be the absolute best in the country in order to best represent the College of Charleston. Most importantly, I’m proud of my team because through the hard, exhausting practices they constantly support, encourage and love each other. They are incredibly special!” 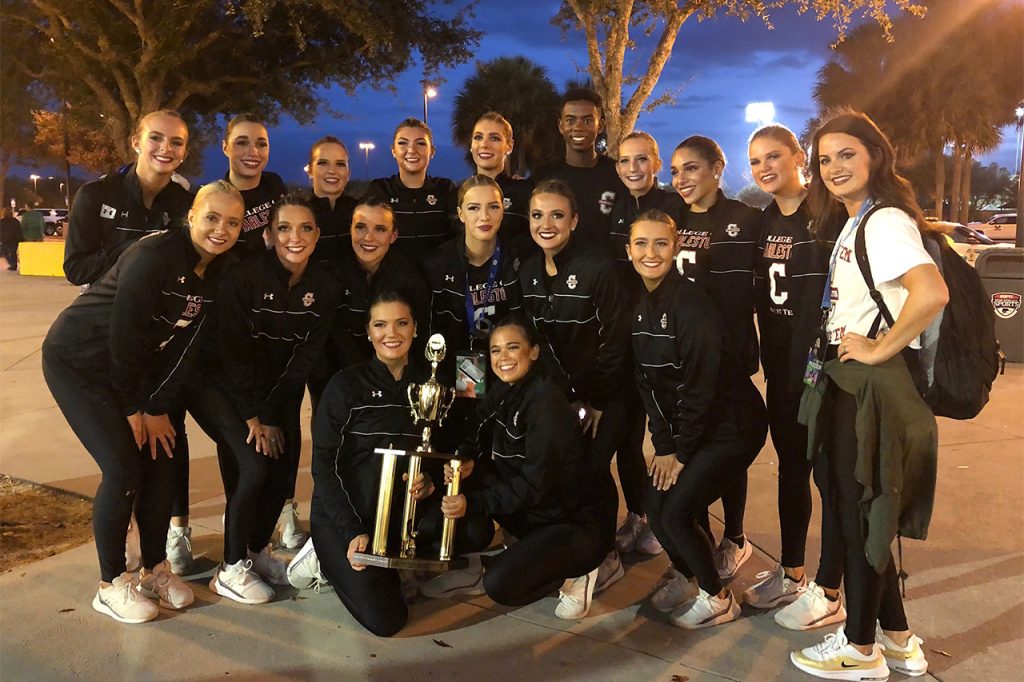 The Cougarettes competed against 16 other teams for the hip-hop routine, which was judged on difficulty, originality, musicality, formation, crowd reaction, coordination, choreography, technique, execution and overall effect.

“We all really came together to make this happen,” says team captain Braden Brewington, a junior who is majoring in arts management and marketing. “Our chemistry on this year’s team was really strong. We all push each other to be better.”

“It’s a really good dynamic – and I think that showed at the competition,” agrees co-captain Lane Dizon, a senior arts management major, who joined the Cougarettes her freshman year, when the Cougarettes placed fifth at the UCA and UDA College Cheerleading and Dance Team National Championships. “This year’s competition was unlike anything I’ve experienced before. To be a leader on this team, and to have finished higher than ever before is a really special way to end my college career.”

Brewington says the team has already set a goal of making the Top 3 in the hip-hop division and making the jazz division finals in 2021.

The nationally ranked Cougarettes dance team performs at College of Charleston basketball games. The group’s performances at the 2020 UCA and UDA competitions aired on ESPNU and ESPN2 at 12 p.m. on Saturday, Feb. 29, 2020.