The fencing club at the College of Charleston has been around for about a decade, but junior and club president Jack Pavlinec has been on a mission to re-introduce fencing as a fun, easy-to-learn sport. And the group is now thriving, with membership climbing into the twenties.

Hailing from Mendham, New Jersey, Pavlinec has been fencing for 10 years.

“I grew up really interested in history and loved Pirates of the Caribbean,” says Pavlinec, noting that he was surrounded by opportunities to fence and wants to share this experience with students at the College who may not be familiar with the sport.

A history major and classics minor, Pavlinec joined the club his freshman year and became the coach his sophomore year.

“I found out pretty soon I had the most experience, and was happy to help those that wanted to learn new techniques,” he says. 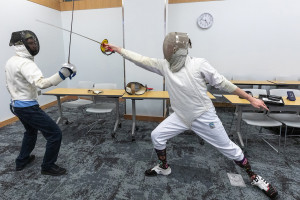 Students in the fencing club practice a match. (Photos by Heather Moran)

The club saw increased interest after participating in this semester’s Spring Involvement Fair.

“I had my members fence each other in Rivers Green. Lots of students came up and joined because of that, and we are excited to have new people join the club,” he says.

The club comes together twice a week for practice. Students work on their footwork, which resembles a form of dance. Pavlinec focuses on these basic techniques first, as they help provide a grounding for the fencers. After covering the fundamentals, the members get right to the point, gearing up and learning about the three weapons used to attack: foil, épée and sabre. Each weapon is shaped differently and is used to strike different areas of the body.

“The weapons and areas of attack help to bring in all different kinds of people into fencing. You don’t have to be a specific height or anything like that to be a great fencer,” he says.

The environment is inviting to all, even those who have no idea how to fence. The club’s vice president, junior MacKinnon Westraad, describes the club as very chill. She adds that members do not pay dues and that the use of the equipment is provided for free. 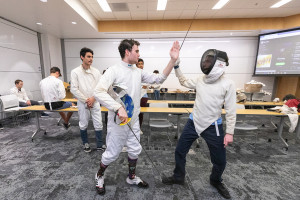 Students in the fencing club practice their form.

Sabre captain and senior Jordan Clark loves the rush he gets from fencing and encourages anyone looking for a boost in adrenaline, or just a new experience, to come out and try it.

Pavlinec says the club is currently having competitions among members.

“Sometimes I will break them up into squads, or big teams, or just individuals,” he says. “Fencing is a one-on-one sport, because it’s just you and that opponent. But it really is a team sport, because your teammates are counting on you to win.”

This semester, Pavlinec hopes to take the team to Clemson, South Carolina, to compete in the Tiger Open, which is an individual fencing tournament.

“Hopefully we can get a lot of people to come. We just got a lot of new gear from the school, and this would be a great way to make a name for ourselves,” he says.

Anyone interested in joining the fencing club can email Jack Pavlinec at cofcfencing@gmail.com.