By Priscilla Vanartsdalen|2020-03-09T10:03:21-04:00February 24, 2020|Academics, All News|Comments Off on Student Club Helps Library Get a Little Greener With Ecosia Search Engine
Students spending time in the College of Charleston’s Addlestone Library this semester may notice a new search engine on the computers: Ecosia is a free web browser extension that helps plant trees while its users search the internet. While it may sound too good to be true, the Berlin-based company donates at least 80 percent of its revenue to nonprofit reforestation organizations. According to its website, Ecosia works like this: Users search the browser to find information, search ads generate income and the company uses that income to plant trees. Rowan Emerson, a sophomore at the College and a member of the student club Alliance for Planet Earth (APE), proposed the library’s change to Ecosia as a sustainability initiative. 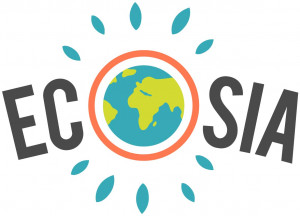 This student-led organization is focused on promoting hands-on sustainability and bringing awareness to social, economic and environmental issues – both on and off campus. Past members of the club have promoted student engagement through various volunteer opportunities, educational events and student work days. Emerson says the club backs initiatives proposed by its members. “APE really doesn’t have an agenda that they are trying to push,” he says. “It’s really about what the student body and club body want to do, and they really help you push for it.” Last fall, Emerson took a particular interest in Ecosia and the potential to increase use of the browser in the library. First, he had to demonstrate how switching to Ecosia would be a sensible decision for CofC. Emerson worked closely in this process with Tracy Bates, director of student computing support, from the Division of Information Technology at the College. “This was really a student-driven initiative,” Bates says. “If anything, we just implemented it. I talked to Rowan about it and that kind of thing needs to come from the bottom up.” In the meantime, Emerson took to social media to spread the word about Ecosia and encourage CofC students to use the search engine on their own personal devices. Even before the library began using Ecosia, Emerson was promoting it on the Instagram page, @cofc_on_ecosia, to help kickstart the initiative. “Originally, I started it just so that people could put Ecosia on their own computers, their own phones, so that it could take off from there,” Emerson says. “The library started using Ecosia this semester, but before then we had funded the planting of over 500 trees. I’d like to say that a lot of that was because of Instagram.” While Emerson is pleased with the library’s embrace of Ecosia, he says that the College still has room to grow in its efforts to become a more environmentally, economically and politically sustainable campus. “I think it is definitely a push in the right direction, but there is definitely more that needs to be done,” he says. “This is just the first of many steps that need to be accomplished.” Students interested in joining CofC’s sustainability efforts can plug into the Alliance for Planet Earth by attending their meetings held on Tuesday nights at 8 p.m. in the Rita Liddy Hollings Science Center, room 103. Priscilla Vanartsdalen is a freshman double majoring in English and communication. She is a writer and the social media director on campus for the online magazine for collegiates, ‘Her Campus.’