Women’s Track and Field: It’s Not Just About Running

Track and field is often thought of as a simple sport. “It’s just running” is a phrase members of the College of Charleston women’s track and field team hear often.

Now in her 17th season as head coach for the Cougars, Amy Seago and her team are on a mission to debunk this misconception.

“I think the mental side to the sport is more challenging than the physical. In other sports, your main opponent is someone else,” says Seago. “In track and field, your biggest competitor is yourself.”

The sport is composed of four event groups: distance, sprints, jumps and throws. The distance and sprints groups make up the “track” portion, while jumps and throws contribute to the “field” component. While Seago oversees the entire team, each group receives individualized training from different members of the coaching staff.

Check out this breakdown of the events and meet a member from each group: 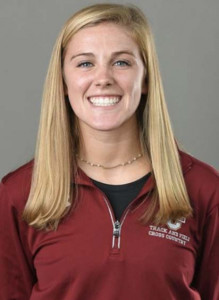 Most people picture this group when they think of track and field. The distance runners at CofC compete in races as short as the 800 meters (which is two laps around a standard, outdoor track) and as long as the 10k (which is equivalent to 25 laps). These athletes pride themselves on staying focused on their goals, no matter the number of miles. These runners also participate in cross country, a separate NCAA sport at the College. The distance group trains year-round, through cross country and indoor/outdoor track seasons.

A captain and junior from Greer, South Carolina, Cate Ambrose says her favorite event is the 1500-meter run, which is about one mile.

The early childhood education major credits Seago for all she has done for her and the team.

“Coach Seago is so encouraging and always pushes us to be the best we can be,” says Ambrose. 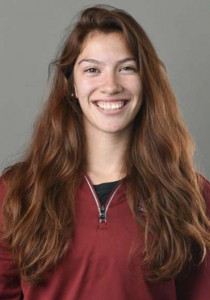 Sprinters may be the group to join if you enjoy running really fast, for a short amount of time. The CofC sprinters work on generating their power into the track as a means of “getting out of the blocks” (a phrase used to describe the start of a sprint). They compete in events ranging from the 55 meters up to the 400. The 100-meter hurdles and 400 hurdles are also included in this category. These women also focus on relay events, emphasizing the importance of communication and teamwork. Sprinters work with Associate Head Coach Michael Tornifolio.

Leona Burton Rojas, a senior from Salta, Argentina, and a captain on the team, identifies the 200 as her favorite sprinting event.

“My favorite part about sprinting is right before the gun goes off. At that moment, all I focus on is getting out of the blocks, and it is like nothing else matters,” says Rojas, who is a hospitality and tourism management major.

Like several of the other sprinters at the College, Rojas is a jumper as well, working with the women of both squads. 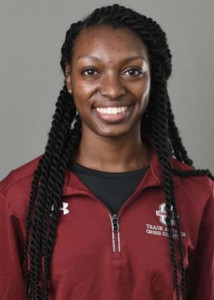 Got hops? This is the group for you. This squad competes in a variety of competitions, including the high, long and triple jump events. Of these three, most people are unfamiliar with the triple jump. This event involves a combination of a hop, skip and jump motion. Pole vault is also considered to be in the jumps group. The jumpers also work with Tornifolio.

Senior Breanna Tatum, a public health major from Greenville, South Carolina, is thankful for her time on the squad.

“I love getting to jump, but it is also exciting getting to watch my teammates grow in their own events,” says Tatum. 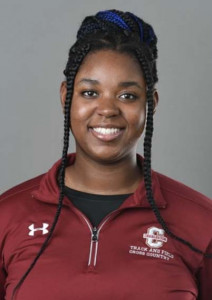 Although there are misconceptions about all the event groups, the throws seem to take a harder hit. The CofC throwers compete in the discus, shot put, weight throw, hammer and javelin. Each throw involves a specific motion, whether it be a turn or spin. They also must learn the proper way to grip each piece of equipment before they can build up their strength to throw. Assistant Coach Josh Aydlette emphasizes the importance of proper technique and timing in his throwers.

A communication major from Oklahoma City, Oklahoma, Kimbra Owens says she is no stranger to the claims about her sport.

“Many people think the throwers cannot get injured,” says Owens. “We do a lot of workouts, especially with a lot of weight, and if we don’t do it correctly, we can get injured quite easily.”

The women’s track and field outdoor season commences at the Coastal Carolina Invitational on March 13-14, 2020, in Conway, South Carolina.