Being the exact same height as Bernie Sanders and Joe Biden came in handy last week for 6-foot-tall College of Charleston student Lucas Moyon. As one of 33 CofC students serving as runners during the Democratic debate on Tuesday, Feb. 25, 2020, at the Charleston Gaillard Center, the Honors College freshman was tasked with standing in for both presidential candidates prior to the event so CBS technicians could get the lighting on the 650 fixtures and 17 camera angles just right. 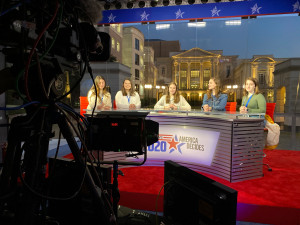 “I had no idea of the preparation that went into these debates, and I’m really civically engaged,” says Moyon, an Aiken Fellow and economics major, who volunteered with the College’s Bully Pulpit Series this past fall. “I’ve watched all the debates. There’s so much sound and camera work they do beforehand.”

“I had no idea that a light at a 45-degree angle is totally different from one that’s at a 47-degree angle,” she says. “You learn the nitty gritty that makes the magic happen. It was amazing to see how many people are involved in the process, and how they all work as a unit. There’s a lot of communication to make the production the way it is.”

Even though they were called runners, there was a lot of standing – and sitting – around. One morning, Moyon had to sit for five straight hours in the anchor’s chair on the CBS News set outside the Gaillard Center while cameramen “inched” the cameras around. He and the other students also spent a lot of time in the “spin and file room” helping with mic checks and getting the space ready for candidates to talk to the press after the debate.

“They don’t leave anything to chance,” says Moyon.

Indeed, not even the selection process and training of the student-runners, another 16 of whom worked the CNN town halls last week at Memminger Auditorium near campus, was left to fate. The process began with School of Humanities and Social Sciences Interim Associate Dean Amanda Ruth-McSwain working with the networks to get an understanding of their needs. Katie Curcio, CBS’ director of professional development, then conducted phone interviews with interested students, while CNN’s Willa Prescott and Jamie Maddox went with McSwain’s recommendations. CBS held an orientation at the Courtyard Marriott, where the students were prepped on their duties and responsibilities, like no sharing or posting of photos till after the event. 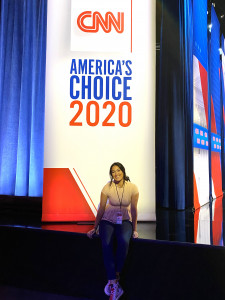 The CBS runners started helping out nine days before the debate on Monday, Feb. 17, 2020. The days were long, often 12 hours or more, but CBS paid them $15 an hour and took care of all their meals.

“They treated us really well,” says Moyon, who also assisted with Gayle King’s interview of U.S. Rep. James Clyburn at Emanuel A.M.E. Church. “I thought it would be like the movies where they were going to yell at us to get them coffee, but that wasn’t the case at all.”

Adds Macedo: “They had such an energy about them and such a passion for their work, and they all took time out to explain to us what it is that they do and how they got there, the pros and cons of it, everything about it.”

The students thanked Curcio and their two other bosses by giving them CofC “Mom” and “Dad” T-shirts.

Sophomore communication major Kalea Perez worked all seven CNN town halls, starting on Sunday, Feb. 16, 2020. Her duties included setting up hundreds of chairs for the audience, helping with the production setup backstage and getting green rooms ready for the candidates, as well as checking in audience members for hours outside.

“I had the time of my life,” she says. “The entire experience was so memorable. I was so happy that I got the chance to see all that goes into pulling together an event like this. You are able to view the show much differently when you get to see all the time, effort and energy the production team puts in, the way the candidates interact behind the scenes, and just everything as a whole that makes up such an iconic event like a CNN town hall. I’m still in shock I got to work for a company I think so highly of. I will definitely use all that I learned in the future.”

The highlight for Moyon and Macedo was actually getting to watch the debate live after CBS put out a call to the runners five minutes before airtime looking for seat fillers.

“It was full circle for me because we had been working so hard, early in the morning to late into the night to set all that up,” says Moyon. “To get to actually see it was pretty special.”

Most of the students were filling seats in the back, but Macedo got to sit in the front row right behind the moderators.

“The experience has definitely shaped my college career and possibly my career route,” she says. “I’m very interested now in the production side of things.”

The only downside (other than missing a class or two): it will be four more years before students get the chance to experience something like this again.