Saint Patrick’s Day Is About More Than Wearing Green

Not many people question the celebration of Saint Patrick’s Day: They just assume it is a day to parade and pinch those not wearing green.

But it’s a bit more than that says College of Charleston English professor Joe Kelly, who is an expert in modern Irish literature. The history of Saint Patrick’s Day and how we began to celebrate it in the United States, says Kelly, is a story of faith, culture and lore.

Saint Patrick lived in England, when he was kidnapped by Irish pirates and sold into slavery. Kelly goes on to tell the story of how the saint escaped, but decided to return to Ireland because he had a calling to Christianize the once Pagan nation. 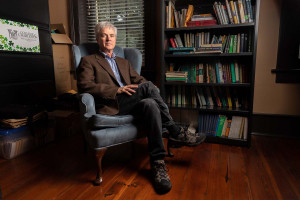 And while Saint Patrick’s Day is often associated with Catholicism, both Protestants and Catholics revere Saint Patrick and claim his legacy.

“Saint Patrick has come to symbolize the unity of Catholics and Protestants in Ireland,” says Kelly.

So, how did the holiday of Saint Patrick’s Day become such a phenomenon in America? The answer lies in the United States being a country of immigrants.

“The Great Famine in 1845 caused thousands of Irish to flee to the United States. Once they got here they created safe spaces for each other, as they adjusted to their new home,” he says. “Today, we celebrate the holiday to trumpet pride in Irish heritage across the nation.”

A local example of a safe space for the Irish community is the Hibernian Society, located on Meeting Street in Charleston, South Carolina.

“Irish and Irish Americans still meet here regularly, and the presidency switches each year from an individual of Protestant faith to Catholic faith,” says Kelly.

Kelly’s passion for Irish history stems from his own Irish lineage: His dad’s grandfather and grandmother emigrated from Ireland around the 1890s. And Kelly was raised with an appreciation for his Irish heritage.

“I grew up listening to the Clancy Brothers sing Irish ballads,” he says.

One of the major assignments students complete is the Irish Heritage Oral History Project. Now in its third year, the project requires students in Kelly’s Intro to Irish Studies class to interview someone from the Charleston area who is of Irish descent.

“They discover an invaluable history of Irish immigration to America, as well as our local Irish ancestral community,” he says.

RELATED: Explore the stories of the Irish in the American South with the Irish Heritage Oral History Project.

The students record and transcribe the interviews so that the local history of Charlestonians of Irish descent is preserved for future generations.

“The interviews are transformed into collections for the Lowcountry Digital Library, which is fantastic because future scholars can learn about the Irish in the American South with a click of a button,” says Kelly, who also leads a summer study abroad course in Ireland.

Without question, whether we realize it or not, Irish culture is inextricably woven into the fabric of American society, and that’s what Kelly hopes to impart to his students.

“It’s very hard to preserve the ethnic identity of an immigrant group four plus generations after one’s ancestors arrived, poor and eager, on American soil,” says Kelly. “But no one would deny that the crazy quilt of this diverse country is richer for its patch of green.”

Tagged with: Department of English • irish and irish american studies