Giving an Organ Leads to Sharing Something Special 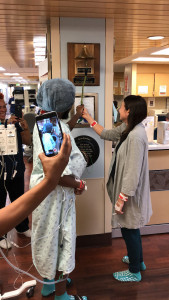 They walked toward each other from opposite ends of the long hospital hall. They couldn’t be more different: she, a petite white woman from Washington, D.C.; he, a big black guy from rural Georgia. But, when the two strangers got to the middle of the hallway and rang that transplant bell together, they knew they shared something pretty special.

“It was a pretty powerful moment just to see him after all of this time,” says Sarah Myer ’09, director of operations in the Office of Admissions, who last September donated a kidney to Dewonn, a 27-year-old father who had been on dialysis for two years as he waited for a kidney. “It was really surreal.”

Myer had started her own donation journey in the spring of 2019, when a Facebook friend had posted about young mother in Mt. Pleasant who needed a donor.

“I thought, ‘Why not see if it’s a possibility?'” she remembers. “I just figured that, if I have something that could make a huge difference in someone’s life, why wouldn’t I give it to them? It was a no-brainer for me.”

And so she started the process, undergoing a barrage of testing and monitoring.

In July 2019, she got a call saying that she was the perfect candidate for organ donation, but that she wasn’t a match for the Mt. Pleasant mother.

“I thought, ‘Why not give it to some other person who needs it? I’ve come this far!'” says Myer, who then decided to take the “Good Samaritan” track through the National Kidney Registry, essentially applying to donate to a stranger. Once she was accepted onto the list, she just had to wait until she got a match. “The waiting: That gave me a little – well, a lot of – anxiety.”

Seven or so weeks later, she got the call, and she was scheduled for surgery.

And before she knew it, she was waking up from surgery. 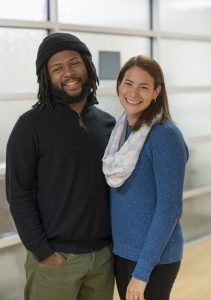 “It was simultaneously scary and overwhelming, but also easy,” Myer says. “Looking back at the whole process and how much goes into it, the surgery seems like the smallest part. But the transplant team was there every step of the way, providing support and just making things easy.”

The College also made it easy. Because South Carolina state employees get 30 days of organ donation leave, Myer was able to recover without worrying (too much) about work.

“I have to give the College and the state a lot of credit for this policy and for helping break down the barriers to organ donation,” says Myer, who was the first person at the College to use this option, despite it being policy for decades. (Note the Organ Donor Leave option next time you complete your leave report – that’s because of Myer!) “If you’re even remotely interested in giving an organ, they make it so there’s no excuse not to. It’s such a rewarding experience.”

And not just for Myer, but for the recipient and his family, too.

“The reason I entered the process was I wanted to know I could change someone’s life – and change the quality of their life,” says Myer, adding that, before the transplant Dewonn was too weak to play with his children. “When I talked to his family afterward, they said he looks more like himself than he had in years.”

Myer stays in close contact with Dewonn and his family, who are happy to report that he’s doing really well – spending more time with his kids, which is so important to him. They’ve learned a lot about each other since then, including that their birthdays are two days apart and that they share a lot of other things in common, too.

“Everything about us looks different from the outside – our age, our size, our race – but it turns out we were a 97 percent match,” says Myer. “It goes to show that we’re all a lot more similar than we think.”