By Ron Menchaca|2020-04-20T08:38:37-04:00April 9, 2020|All News, Campus Life|Comments Off on New CofC History Website Discovers Hidden Stories
The College of Charleston has launched a new website that seeks to tell a fuller story of the university’s long and complex history. Developed as part of the celebration of the 250th anniversary of the College’s founding in 1770, the website project, Discovering Our Past, was conceived and created by the anniversary’s Historical Documentation Committee. The website, which also includes a mobile app for Apple and Android smartphones, is presented as a series of multimedia essays that can be accessed individually or as part of a self-guided tour of 13 campus locations. Each essay is accompanied by historical images, drawings, documents and maps as well as contemporary photos. While public access to campus remains extremely limited due to the COVID-19 pandemic, the College is launching the virtual component of this project now in order to make these online resources available to the campus community and the general public at a time when many are working, teaching and learning from home. The first tour celebrates the 250th anniversary and includes essays on iconic locations such as Randolph Hall, Cistern Yard and Porter’s Lodge, but it also features historic houses whose pasts are not as well-known, including structures on Green Way, College Way and St. Philip Street. 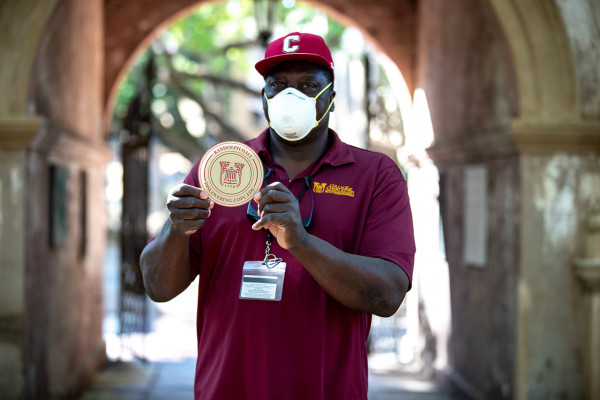 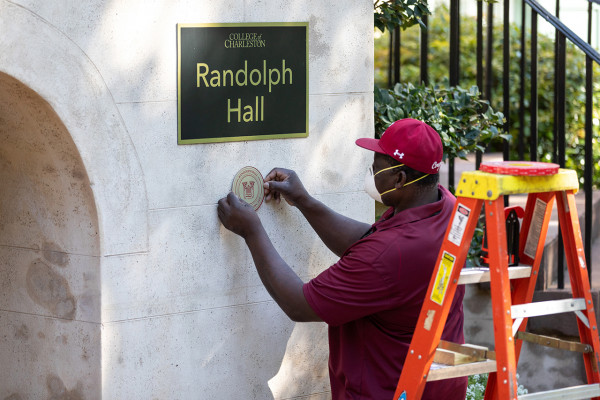 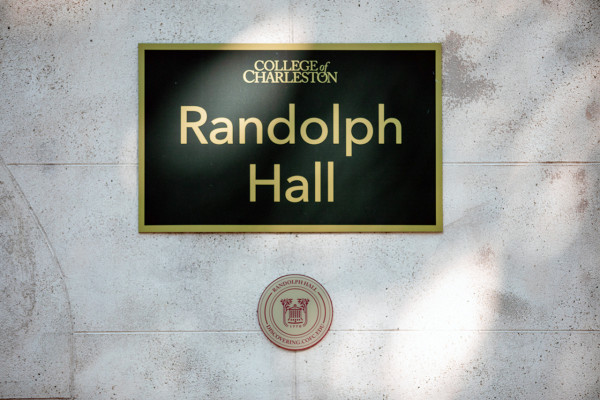 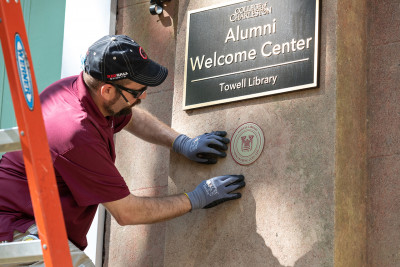 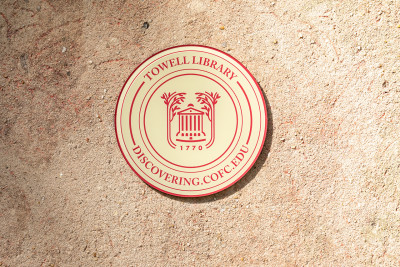 Above: Facilities Management Carpentry Shop Supervisor Sam Holmes installs the 250th anniversary medallion for Randolph Hall as part of the Discovering Our Past project and website. Below: Erik Borglund, from the Carpentry Shop, places the 250th medallion on Towell Library. (photos by Heather Moran) Each of the buildings researched for this project has been marked with a special medallion that features the building’s name or address, the College logo and the project web site address. The committee partnered with faculty, administrators, staff and students from a variety of areas to conduct and vet the research for the essays and photo captions. The committee also worked with several community and institutional partners to locate historic documents, confirm research findings and obtain photo use permissions. The members of the Historical Documentation Committee are English professor Julia Eichelberger, Addlestone Library Scholar in Residence Harlan Greene and Vice President of Communications Ron Menchaca. The committee’s research assistants are graduate history student Grayson Harris, senior English major Keyasia Pride, senior political science and history double major Erik Cronell and Charleston researcher Sarah Fick. Research on the project is continuing, and the committee intends for additional tours to be added in the months and years ahead, including a tour devoted to African American history at the College, says Eichelberger. “We chose an online publication because that allows us to share up-to-date information and new stories,” says Eichelberger. “This is an ongoing project. Students and faculty will continue researching CofC’s past, and this website will publish their discoveries.” Several of the essays include details about the College and its people that have been historically under-recognized, misunderstood or ignored, says Greene. “This has afforded us an excellent opportunity to not just add the stories of those left out, but to verify, as an academic institution should, the veracity of versions of the past that have come down to us,” says Greene. “Our students will now have the chance to discover historical facts and correct inaccuracies as they add to the project.” 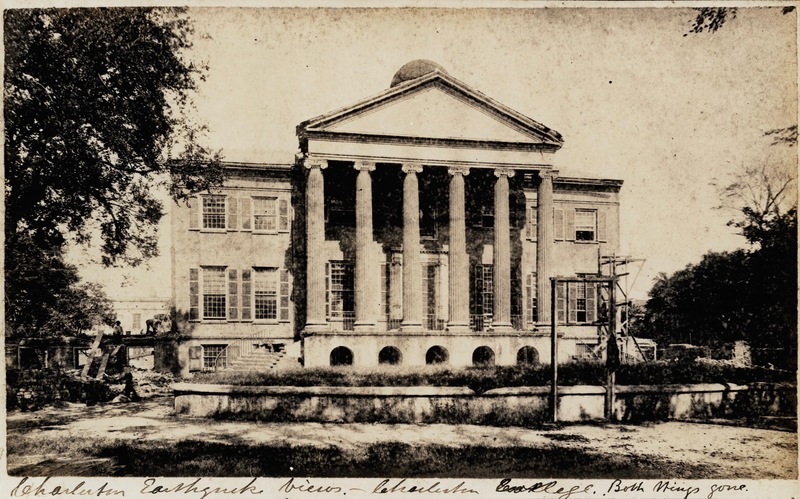 The Charleston earthquake of 1886 significantly damaged both the east and west wings of Randolph Hall. This photograph was taken after the damaged wings were torn down. They were rebuilt between 1888 and 1894 under the direction of Gabriel Manigault, a professor, amateur architect and curator of the College’s natural history museum. (Photo courtesy of College of Charleston Libraries, Special Collections)

Some of the new or newly discovered facts about the College include:

Featured image: Circa 1930s view of Porter’s Lodge. In the background is Randolph Hall, and in the upper right corner, the Charleston Orphan House (demolished in 1953 by Sears, Roebuck Co.). The College provided scholarships for a few boys from the Orphan House. Photo courtesy of College of Charleston Libraries, Special Collections.