Baking bread has become a common activity across the country in the last few weeks. So common, in fact, that little packets of yeast have been almost as hard to come by in grocery stores as toilet paper. People are discovering that baking bread is calming, tastes delicious and fills the room with a mouthwatering scent. 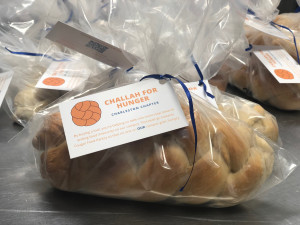 One group of College of Charleston students, however, has been baking bread all year. Challah for Hunger is a student club that meets every other week to bake bread. They gather in the Jewish Student Union to bake loaves of challah, a special bread in Jewish cuisine, which they sell the following day in Cougar Mall. Proceeds go toward the Cougar Food Pantry and Swipe Out Hunger; two crucial organizations that support the approximately 30 percent of students on campus who are housing and food insecure.

With the coronavirus pandemic leaving many in the greater Charleston community economically insecure – and by extension food insecure – Challah for Hunger has expanded its reach in recent weeks, organizing an online fundraiser for the Lowcountry Food Bank. To date, the group has raised $1,200 for the food bank.

“The mission of our organization is to raise money and advocate to end food insecurity on campus. Though this semester was cut short, we still wanted to find a way to support our campus community and the Charleston community,” says Caitlin Dean, psychology major and Challah for Hunger advocacy chair. “Due to COVID-19, many people have lost their jobs and sources of income. More and more people are going to be struggling to find their next meal. For this reason, we have partnered with the Lowcountry Food Bank to help them raise money.”

It’s an effort that is greatly appreciated by the food bank, as administrators there work to handle an influx of requests for assistance.

“We are so pleased that the College of Charleston’s Challah for Hunger chapter is conducting a virtual social media fundraiser to help feed our neighbors in this time of uncertainty,” says Pat Walker, president and CEO of the Lowcountry Food Bank. “Challah for Hunger is a great example of our neighbors sparking positive change and working collectively to solve urgent challenges, right here in our community.”

Challah for Hunger is a national organization with more than 80 chapters on campuses across the country. The College’s chapter, which is the only one in South Carolina, launched in September of 2015 as a branch under the Hillel/Jewish Student Union. The group became an official Student Government Association-approved club on campus in 2018. Challah for Hunger club president Lauren Dryzer, an arts management major, says they have raised approximately $3,000 to go toward ending food insecurity since their founding. This year alone, the group raised $1,185 and baked 402 loaves.

Shira Bezalel, vice president and treasurer for Challah for Hunger, joined the organization her freshman year and she is proud of the work she has done through the group.

“Little did I know how much this club would impact my college experience!” says the psychology major. “Not only have I grown close to so many people involved in the club, but I have also learned so much about the importance of tackling food insecurity on campus.”

With a spoon, combine and mix vegetable oil, salt, sugar and warm water in a large bowl.

Add yeast and 3 cups of flour to wet ingredients and mix.

Note: The vegan recipe results in stickier dough, so more flour is required. Wait until dough is considerably less sticky (not immediately attaching to your fingers) to put aside the spoon and knead with hands.

Let rest for 10 minutes, then knead for 6 minutes (adding flour as needed).

Cover with damp (preferably warm) paper towels and let rise for one hour.