Architect and activist Walter Cain ’82 wants to make the world a better place. And he’s doing that in all sorts of ways from giving back to his alma mater to embracing sustainable architecture to creating public installations to show the proper amount of space for social distancing.

After graduating from the College of Charleston, the English major obtained his MBA from the Wharton School at the University of Pennsylvania before moving to New York City and working his way up to partner at a private equity firm. 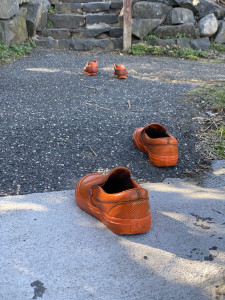 An example of the proper space for social distancing created by alumnus Walter Cain. (Photos provided)

Wanting to make a difference after achieving a successful career, in 2007 he established the Cain Family International Scholarship to give back to the College since he and his siblings, Randy Cain ’80 and Irene Cain Simoneaux ’84, benefited from CofC scholarships. Thanks to the Cain Family International Scholarship, numerous students have been able to have a total-foreign-language–immersion and cross-cultural experience.

Cain’s life pivoted when he and his partner purchased an 1837 Greek Revival home in the historic town of Piermont, New York.

“The house was a huge project, and I liked it more than my day job,” says Cain, who decided to retire and pursue a degree in architecture.

“I was old enough to be the parent of most of my classmates,” he laughs. “It was the hardest thing I’ve ever done and the most satisfying.”

Cain was studying for his master’s in architecture at Columbia University when Hurricane Sandy hit in 2012.

“It completely changed the conversation,” he says. “After seeing all the damage, I decided to focus on sustainable architecture.”

After working for a small architectural firm for two years, Cain started his own business, Waca Design. His company looks at how we can build using sustainable materials, particularly reusing materials from demolition.

“The system is stacked against reuse in architecture,” says Cain. “Raising awareness is the first step.”

Cain did just that in 2018, when – after gutting a New York City loft that generated 36 tons of detritus – he created “Demo-Demo” (Demolition Demonstration), an on-site pop-up art exhibit that utilized all the waste materials, which were later recycled or used for the loft’s renovation.

“The great thing is that the exhibit allowed people to figure out the potential of repurposing on their own,” says Cain. 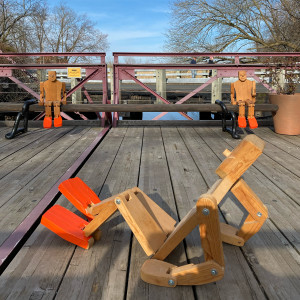 Now with COVID-19 permeating daily life, his attention has shifted to how people are struggling with everything from wearing masks to social distancing.

Soon after social distancing was encouraged, Cain was walking through a park in Piermont when he noticed that people weren’t complying with 6-feet social distancing requirement. When he just happened to see the Piermont mayor on his walk, he expressed his concerns, suggesting that maybe the problem was that people don’t understand what 6 feet looks like and offering to help them visualize that distance.

“Go for it,” said the mayor, and Cain took action, creating a series of installations called 6 Feet.

“People tend to respond better when seduced into something, so I created a series of fun installations using found materials and a little bit of help from Lowes,” says Cain. “I arranged items to show the distance of 6 feet at the threshold of parks, but people had to figure out the purpose on their own.”

“Obviously, I can’t change the world, but it’s worth trying to raise awareness,” says Cain.

Not a bad idea.