Professor Supports Educators in the Wake of COVID-19

It was sudden. It was unexpected. And it was starting to seem unstoppable. In just two weeks, it had spread to 99 countries, its numbers swelling to over 23,000. And – as people worked to keep up with its exponential growth – the demand for support revealed a pervasive problem.

The sheer number of educators who joined the fledgling Higher Ed Learning Collective made it obvious just how much the higher education teaching community needed a place to coalesce and unpack the abrupt changes that the COVID-19 pandemic had thrust upon it. 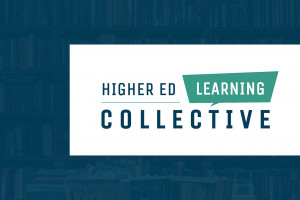 “We had no idea it was going to explode the way it did,” says W. Ian O’Byrne, assistant professor of literacy education in the College’s Department of Teacher Education and one of the 12 founding members of the Higher Ed Learning Collective, which began in March as a direct result of the challenges that college and university educators faced as they transitioned from face-to-face instruction to online teaching. “The thinking was that, because so many faculty weren’t prepared for distance education, they needed a place to go to get advice and help from each other – a place where they could collaborate, solve problems, share ideas and just connect.”

That place started on Facebook: The group had 3,000 members within a day of being created and nearly 20,000 by the end of its first week. The groundswell movement cemented itself in the higher education community when it was recommended in an independent report to Education International and UNESCO and later in The Chronicle of Higher Education. Now with over 25,000 members in 100 countries, the collective is also supported by a long list of universities, libraries and educational associations.

“We’ve been trying to create an infrastructure that can be scaled up,” he says. “We want it to be manageable and meaningful.”

In order to be as meaningful as possible, the collective has listened to the needs of its members and shifted its emphasis accordingly.

“What we heard the most was, ‘I need support,’ and it became clear that everyone was just in survival mode,” says O’Byrne. “And that means a large part of the population needed just-in-time support – emergency online teaching skills like how to use Zoom, how to communicate with students, that kind of thing. But also, people were going through trauma.”

And that makes it hard to focus on anything else.

“So, a lot of what we’re doing now is trauma-informed and trauma-supportive pedagogy,” says O’Byrne. “We’re helping people get back on their feet with teaching, but we are addressing the emotional side, too. What people are feeling is grief. You need to say to individuals that they may be in shock. Notice it, name it and give yourself a break. Give your students a break, too. Think about them, be there for them. Everything beyond that is gravy.

“We’re also trying to impose some perspective – this isn’t the end of the world,” he continues. “Right now we’re all in a weird world – it’s like, I sometimes feel like an astronaut on a different planet. Everything is strange. But eventually we hope that we’ll leave this reality and go back to the world we know. We just have to get through the now.”

The biggest piece of getting through the now, says O’Byrne, is self-care.

“That’s the immediate threat right now: the self-care side of things,” he says. “We have to remember to go outside, get some sunshine, get some exercise, get some sleep – and also feed our need for socialization.”

To that end, the Higher Ed Learning Collective offers its community daily online yoga sessions, weekly coffee chats via Zoom and even virtual happy hours. And – because the 25,000+ individual members are supporting one another through posts, discussions and chats – the community is largely supporting itself.

“It’s interesting to watch how the mood changes: The tenor of the conversation has moved from panic mode to, ‘OK, I’m online,’ and now everything from how to support anxious students to friendly recipe exchanges,” says O’Byrne, adding that – as the collective grows and develops – the pillars it was built on remain the same: solidarity, equity, access and working together to solve problems as a community – whatever those problems may be. “Our No. 1 job is for people to feel like they’re supported. We understand that you can’t be all things for all people, and we don’t want to shoehorn everything into one space. But supporting one another is the entry point for good pedagogy.”

And, while the collective does curate the best of article, blog posts, tutorials and presentations – and even offers online training – it has grown into something more than just a collection of distance education “how tos.”

“The Higher Ed Learning Collective is a supportive and inclusive space for the well-being of higher ed faculty in its totality,” says O’Byrne. “It will continue to grow and adapt. This is something that’s going to survive the coronavirus – just like we will. Together, we’ll get through this.”

Ian O’Byrne, pictured above, publishes a weekly newsletter, Digitally Literate, that focuses on the news, research and opinion at the intersection of technology, education and literacy. He is also one of the founders of the Screentime Age research group.