When Nebraska native, practicing attorney, philanthropist, innovator, supportive father and avid basketball fan Harry Huge and his wife Reba set up a second home in Charleston, they quickly adopted the College of Charleston.

“Harry, just walk out your front door and turn left: You are at the College of Charleston!” Sue Sommer-Kresse, professor emerita, told him. “We are perfect partners!”

And the Huges have been perfect partners ever since – supporting the College community for more than 25 years both individually and through the Harry and Reba Huge Foundation, and positively changing the lives of students and faculty in innumerable ways.

Indeed, when Harry Huge passed away on Sunday, April 26, 2020, he left behind a strong legacy at the College. 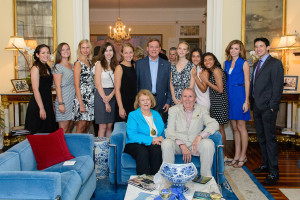 “Harry Huge was bigger than life,” says Trisha Folds-Bennett, dean of the Honors College. “It’s unimaginable that he is gone. We are so fortunate that he and Reba adopted the College of Charleston and shared their enthusiasm for developing the potential of young minds with us.

“Harry loved to tell a good story – but, even more, he loved when that story could focus on the success of a Huge scholar,” adds Folds-Bennett. “My heart is broken that we will no longer experience gathering around the table with him. We know, though, that Reba and Ted [the Huges’ son] will continue to carry the torch, and we’ll be right there with them.”

Since 2012, Huge scholars have received full scholarships to the College along with specialized mentoring and the means to engage in summer academic enrichment. One of the top scholarships awarded in the Honors College, this annual merit scholarship has been awarded to 10 students over the years.

The Huge scholars are just one example of Huges’ unwavering commitment to the College of Charleston: They have supported the school in myriad of ways, from athletic patronage to travel grants for students and faculty. Their contributions have extended beyond the College, too, as they’ve supported a joint international program for student entrepreneurs from Nebraska Wesleyan University, The Citadel, the College of Charleston and two Estonian universities.

Bryan Ganaway, faculty fellow and academic advisor in the Honors College, recalls when the Huge Foundation graciously provided him with a grant to set up an exchange program for the international scholars at Tallinn University of Technology and the University of Tartu in Estonia.

“Harry believed in community and serving others, and his support from the Huge Foundation paved the way for long-term relationships that are key to the success of our study abroad programs,” says Ganaway. “Estonia is the only permanent study abroad destination for the International Scholars Program and is creating enormous opportunities.”

For example, biology professor Chris Korey has taken students to Estonia for genetics research, and associate professor of biology Beth Meyer-Bernstein is working to develop a summer research program for science students.

“Developing these rigorous study abroad programs is a key strategic goal of the College of Charleston,” says Ganaway, “and we would not have been able to enjoy these successes without the Huge Foundation.” 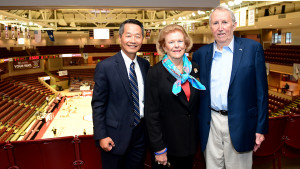 To date, the Huge Foundation has awarded nine CofC faculty with grants to conduct research in Estonia – a country that Huge himself had strong connections to.

In the 1970s, President Jimmy Carter named Huge to a presidential advisory committee, and the committee chairman urged him to travel to Tallinn, Estonia. Huge did so, and came away so impressed that he began representing the Estonians’ interests in Washington. In 1991, Estonia gained its independence, and 15 years later awarded Huge the prestigious Order of the Cross of Terra Mariana at the presidential palace in Tallinn for his contributions to the country’s independence movement. In 2011, Harry was named honorary consul of the Republic of Estonia for South Carolina.

After Estonia’s independence, Huge wanted to foster even greater collaboration between the republic and the United States and to enhance student exchange programs. He believed colleges in the United States and Estonia are grooming future leaders who would benefit from significant international experiences and exposure.

“I am beyond thankful for Harry Huge and his foundation,” says the international studies and political science double major. “They granted me a scholarship so that I was able to spend a semester studying at the University of Tartu in Estonia. While I was there, I partook in master’s international studies classes and obtained knowledge that I will carry with me into my career. Without Mr. Huge’s generosity, I would not have been able to have such an incredible abroad experience.”

Huge’s vision for international exposure extended to the Athletics Department. As a varsity basketball player at Nebraska Wesleyan University, he loved to watch a good game, and both he and Reba were dedicated donors to the Cougar Club. They held season tickets and were also members of the Legacy Club. To bolster the Cougars’ global exposure, the Harry and Reba Huge Foundation sponsored the men’s basketball team’s trip to Ireland in 2017. Huge even arranged for his alma mater’s basketball team to play in TD Arena against his adopted Cougars team just last October. The joy these two teams brought him was clear that day.

Harry Huge had an enormous impact on the College of Charleston. He touched the lives of many, and the university benefited greatly from his goal of serving others.