When music major Tianyu Liu came to the College of Charleston to study violin with professor LeeChin Siow, he made it his mission to compete in nationally and internationally acclaimed competitions. In 2017, he won the Ronald Sachs International Music Competition in North Carolina. In 2019, he competed as one of 16 quarter finalists in the Michael Hill International Violin Competition in New Zealand.

He was scheduled to compete in numerous competitions in 2020, but due to COVID-19 he was only able to participate in the Music Teachers National Association (MTNA) Young Artist Performance Competition, which continued with its competition virtually. It was an opportunity, Liu didn’t take for granted, earning first prize in strings at the national MTNA.

“Although a live performance is preferable, because we can see the performer’s stage presence, we decided to hold the national competition online,” says Linda Stump, director of competitions, MTNA. “We always hold our state competitions live and then hold the Division Competitions online. Our system made it easy for us to transition to a virtual performance for the national finals.”

For students like Liu, preparing for a remote competition presents some opportunities as well as challenges.

“An in-person competition is intense and nerve-wracking,” says the recipient of the Marion and Wayland H. Cato, Jr. Endowed Scholarship for the School of the Arts, the Lee Harwood Scholarship in Music and the Reba Kinne Huge Award in Music. “When you’re on stage, the audience and judges can be intimidating because you know you will only have one opportunity to sound good.That said, the violin is an instrument with so many various colors and timbres and an in-person competition allows competitors to convey those beautiful colors and musical phrases directly to the audience and judges. I think it is much more vivid and beautiful than an online competition.

“When you are preparing a competition recording, you know you have the chance to make it perfect,” adds the Wuhan, China native. “I had to perform again and again for just one single piece. When I became frustrated and annoyed, Professor Siow encouraged me a lot. She listened to my recordings and pointed out where I could improve.”

Siow says it was a meticulous process to help Liu get it just right. 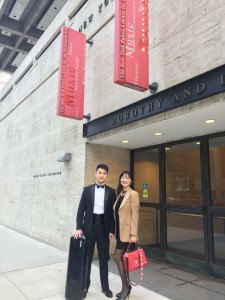 Tianyu Liu and LeeChin Siow at a competition in New York City.

“We must have spent 20 hours reviewing the tapes, marking the score and working on the detail,” says the associate professor of music. “You aren’t allowed to edit the tape so you have to keep trying until you get it right.”

“I am very proud of Tianyu,” says Siow. “It is not easy to win this highly regarded national round, and it is a milestone for the College of Charleston.”

And, for Siow, seeing her student succeed is special.

“I have mentored Tianyu since he was 14,” adds Siow. “He has always wanted to compete at the international level. It has been so rewarding to be part of his journey and to see him realize his dreams. To have your students do so well is an incredible feeling.”

It’s a special achievement for Liu, too.

“I could not have achieved this without Professor Siow’s support,” says Liu. “Winning the MTNA national final means my music is recognized and appreciated by others and that is the most important thing to me. I want to share my music and let people feel the love from music.

“Winning is also a special gift to Professor Siow and my parents,” adds Liu. “They help me without any reservations, and winning the competition is the best gift I can give them.”

Liu will now turn his focus to the Menuhin International Violin Competition, which has been postponed one year. After graduation in 2021, Liu has his eye on graduate school.

“I hope to attend a music conservatory like Juilliard as there are still many ways I can improve,” he says. “It will be a big challenge, but constantly challenging myself will help me to break through barriers.”

And that is how one becomes a virtuoso.