Political Science Graduate Looks Forward to Her Next Campaign

That three-word phrase quickly became the unofficial rallying cry used by many supporters of Senator Elizabeth Warren during her recent presidential campaign.

It’s a mantra that political science major and Honors College graduate Zainab Dossaji knows well. She heard it many times while working as an organizing intern for the Elizabeth Warren campaign in Charleston during the 2019-20 school year. Now, those words have taken on a new meaning for Dossaji as she graduates from the College of Charleston. 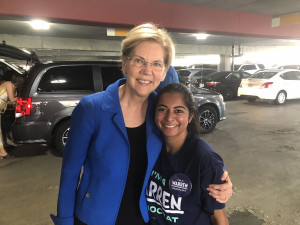 The arrival of COVID-19 during their final semester at CofC changed everything for Dossaji and her fellow graduates. Online classes replaced face-to-face learning with favorite professors. Meeting friends for coffee was replaced with scheduling a Zoom chat. Hugs and handshakes became things of the past. And walking across the Cistern during May commencement had to be delayed.

When the coronavirus changed the landscape of the world, Dossaji focused on her school work and tried not to dwell on the future. Now that her college career has come to an end, she is ready to begin the next chapter of her life.

She says politics is in her future.

She already has a head start on many of her peers. As a junior, Dossaji spent a semester in Washington, D.C. interning in the Civil Rights Division of the United States Department of Justice.

While working with the Warren campaign this year, she was invited to take part in a panel discussion with CBS This Morning co-host Gayle King to talk about the importance of the youth vote this political season.

“I feel like I have always been socially engaged, but I definitely became more politically active when I entered college in 2016,” says Dossaji. 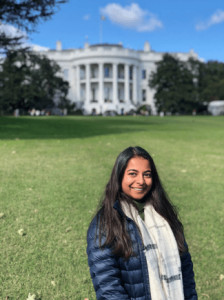 Zainab Dossaji plans to start a career in politics in Washington, D.C.

As an Indian Muslim woman living in the south, Dossaji says she quickly became interested in the politics and policy that swirled around the 2016 presidential campaign. That interest in the future of the political landscape is now fueling Dossaji’s desire to return to Washington, D.C.

“I am really interested in joining an organization that is dedicated to getting more women involved in politics,” she says. “There are setbacks that many women face running for office. I believe that we need to go out and actively campaign in order for more women to be elected.”

As for the CofC commencement ceremony in October, Dossaji hopes to participate in the celebration.

“The entire Class of 2020 worked really hard and had to deal with the massive shifts brought on by the coronavirus,” she says. “We deserve to celebrate and commemorate the fact that we have gone through this school year regardless of the chaotic world around us.”

Tagged with: class of 2020 • commencement • Department of Political Science • homepage-feed • school of humanities and social sciences