If it hadn’t been for coming to Charleston for spring break her junior year of high school, Madison Crow never would have ended up at the College of Charleston. This Tennessee native intended on spending her vacation on the beach, but decided to join a friend on a tour of CofC. Now, she’s completing her degree at the College.

“It was a complete accident that I found out about the College, but I loved the campus so much that I came back to interview with the Honors College and realized this was my dream school,” she says. “I met incredible people and realized I would be a name, not a number at the College.”

“While in China, I was able to interact for the first time with a language so distinct from my own,” says Crow. “I also got to try foods that were completely new to me and learn about a culture that was so much older than mine! We also saw many concerts of traditional Chinese music in tea houses and at a local university. I was able to explore the Chinese culture from many different perspectives!” 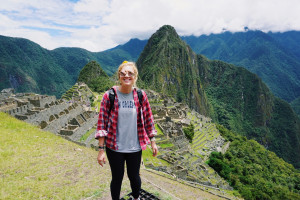 Madison Crow taking in the sights of Puerto Madero in the center of Buenos Aires from the Reserva Ecológica Costanera Sur. (Photos provided)

This trip was only the beginning of her travels. After deciding to spend two semesters abroad, Crow was very intentional about planning her classes to make sure she completed necessary requirements. She spent the spring of her sophomore year in Buenos Aries where she completed courses about Argentine history, indigenous cultures, social issues and the Spanish language. She also traveled to San Carlos de Bariloche, Argentina, on a field study to interview Mapuche communities. During the fall semester of her junior, she went to Chile, where she investigated contemporary feminism through an independent study, conducted entirely in Spanish. Crow took courses with Chilean professors on Latin American politics, culture and history with an emphasis on Chile.

These experiences made her the perfect candidate to be a peer advisor at the College’s Center for International Education (CIE), where she worked for the last few years. Some of her responsibilities included advising students on study abroad programs, weekly presentations and managing social media. She says the experience has helped her feel more confident about leaving school and entering the “real world.”

“Madi is the ideal peer advisor having maximized her opportunities to study abroad throughout her College career with international experiences in China, Peru, Argentina and Chile,” says Sarah Simmonite, CIE associate director. “Her passion and enthusiasm are immediately evident upon speaking with her. She has a genuine desire for her fellow students to experience and benefit from both the wonders and challenges of study abroad regardless of where they go or for how long. She has been an inspiration not only to the many students she has worked with, but also to the CIE staff. Madi is a model ambassador for study abroad and a testament to why so many students choose to attend the College.” 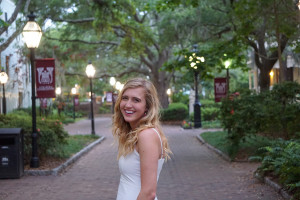 And Crow’s international experiences shaped her thesis for her bachelor’s essay for the Honors College, which focused on identifying the presence of and encouraging pride for indigenous languages in Charleston. She became interested in this topic during her work as a volunteer at Midland Park Primary School in North Charleston where she met parents who spoke indigenous languages and couldn’t communicate with their children’s teachers.

“It was a lot of trial and error,” Crow says of the time she spent trying to identify speakers to interview and coming up with methods to preserve and promote their languages.

In the end, she identified 14 different indigenous languages in Charleston spoken by 40 participants, the majority of which originated from central and southern Mexico and Guatemala. As part of the project, she created a multilingual visual dictionary for children as a tool to share indigenous languages with younger generations.

Having contributed so much to the College and greater Charleston community, it’s no surprise that Crow has received awards for her achievements. She was recently awarded the John Lewis Gervais, Jr. Award, which goes to graduating seniors in the Honors College with the highest GPA. The Department of Hispanic Studies also honored her with the Distinguished Spanish Major award alongside departmental honors.

Crow has applied to graduate schools in Spain where she hopes to gain additional language skills. But as she prepares to depart CofC, it’s clear she’s left an impression.

“I have had the honor and the privilege of closely working with Madi, especially during her senior year at CofC,” says Ricard Viñas-de-Puig, assistant professor in the Department of Hispanic Studies’ linguistic studies. “She is a motivated, hard-working and talented student, with a curious mind and interests that go well beyond the classroom, ranging from language and culture to advocacy and human rights. It’s been a pleasure teaching and mentoring Madi, and I also have learned a lot from her work. Given her qualities, her abilities, her enthusiasm and her willingness to always do the best work possible, the future holds great things for her.”