Computing in the Arts Grad Masters the Art of Coding

With each flick of her wrist and tilt of her cellphone, College of Charleston graduate Pangur Brougham-Cook creates a smattering of blue polka dots across her computer screen as music ripples simultaneously through the air. The more she turns her phone, the more notes spill out alongside a flurry of blue dots. The darker the blue of the dot, the lower the note. The lighter the blue, the higher the pitch.

This is Clementine, a digital instrument Brougham-Cook has spent the last three years refining with computer science professor Bill Manaris. But Clementine became more than just a cool project for the computing in the arts major to tinker with when, in the spring of 2019, the Music Library of Greece chose to include the program in its new music interaction lab called Musix Lab. 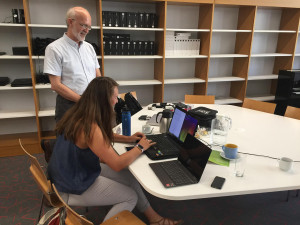 Designed for children, Clementine is a multiplayer program that allows anyone to turn their cellphone into a musical instrument. The program offers users different instrumental sounds to experiment with in both solo and group settings.

“We wanted people, particularly children, to walk away feeling like they’ve been able to make music very easily, without having to pursue years of lessons and training,” says Brougham-Cook, who also worked with Manaris to create a second program for the music library – this one geared toward composers and musicologists – that creates an interactive diagram based on harmonic relationships known as Tonnetz. That program was built as a tool to help accelerate the composition process.

In the summer of 2019, Brougham-Cook and Manaris traveled to Athens, Greece, to install the programs at the library, which debuted Clementine to the public in September.

“It was awesome,” says Brougham-Cook, who was also an Honors College student. “Just knowing the work that I built is in the same building where they keep manuscripts of Mozart and Beethoven is incredible.”

And in some ways, says Manaris, the technology used to create Clementine is a new step in the evolution of music. 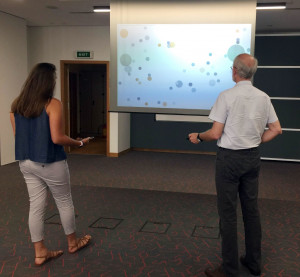 Pangur Brougham-Cook and Bill Manaris test Clementine at the Music Library of Greece.

“We are treating the code as a music manuscript itself,” says the chair of the College’s Department of Computer Science. “What makes all this tick is coding. Coding becomes the canvas on which you build the artistic artifact. The algorithm is the medium.”

Brougham-Cook didn’t stop experimenting with Clementine when she returned to campus last fall. She made the program the focus of her Honors College bachelor’s essay, asserting that the Clementine instrument can help expedite musical education and collaborative music making by reducing the amount of time spent learning complex instrument techniques.

After a series of user tests, it became clear, says Brougham-Cook, that Clementine “can elevate a new user to be able to make new music and engage creatively with other people in under 30 minutes.”

For Manaris, seeing Brougham-Cook succeed in executing such a technical project is very rewarding. Manaris first met Brougham-Cook while she was touring the College as a high school student. At the time, she was thinking about pursuing a career in sound engineering after finishing up high school at the South Carolina Governor’s School for the Arts and Humanities, where she trained in classical and jazz double bass. A demonstration of an earlier version of Clementine convinced Brougham-Cook to enroll at CofC as a computing in the arts major.

“During that first day, I showed her the programming language Python, which Pan was seeing for the first time,” recalls Manaris, adding that – at that time – Brougham-Cook had not programmed a computer before. “Now, four years later, Pan has become an expert in it (and other programming languages), and she has co-authored a paper and helped present it at the International Conference on New Interfaces for Musical Expression.” 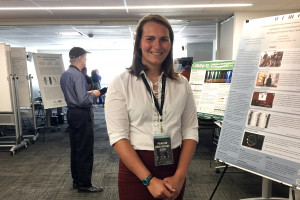 Pangur Brougham-Cook at the International Conference on New Interfaces for Musical Expression.

Brougham-Cook, who served as the president of the College’s Women in Computing club for the 2019–20 academic year, developed a variety of skills through her work with Manaris, including contributing to new code for Clementine, testing and refining the system and exploring how a system like Clementine can be used to develop telematic musical experiences outside of a concert hall.

Most importantly, Brougham-Cook, who officially graduated last week as a member of the Class of 2020, says she gained confidence in her ability to write code for non-artistic programs. That led her to apply for and secure a job with Red Hat, an open source Linux software company, six months before she earned her degree. She plans to move to New York City later this year to begin her position with Red Hat as an associate consultant.

“Coming out of college learning how to code, I feel a lot more powerful with this skillset,” she says. “I never saw myself going into tech itself – I was looking at creating tracks for video game companies or working for music streaming companies like Spotify or Apple Music – but I realized there’s a much broader world of coding where I can use my skills. I still have all the skills as a software engineer, it’s just that our focus as computing in the arts majors is to have a creative output.”

And as Brougham-Cook has learned, creativity and hard work can take you anywhere.

We're excited to welcome the first cohort of 1967

Look for the rainbow 🌈 on rainy days! ☔️

We have countless support services available to ou