Alumnus Is Making the Headlines

Before COVID-19, no one gave much of a thought to the people in the labs all over the country who do diagnostic testing and research. Now, these vital scientists are no longer toiling in anonymity since proper testing will be the key to getting a semblance of our normal lives back. Leading the way is College of Charleston alumnus Blair Holladay ’84, the CEO of the American Society for Clinical Pathology (ASCP).

“I’ve never seen it like this in the 35 years that I’ve been in practice, never,” he says. “We’ve gone from the back page of the newspaper to the front page. We’re the scientists behind the scenes making the diagnosis so the doctor can treat you, but most people don’t even know we exist. They just assume that there’s a black box in the bowels of the hospital that you shove a specimen in and out comes the test results.”

Pathologists are the unsung heroes on the front lines of this pandemic war, and a big part of Holladay’s job is to make sure they have the needed weapons to help them defeat this invisible enemy, like the necessary reagents (compounds that cause chemical reactions) to ramp up testing. 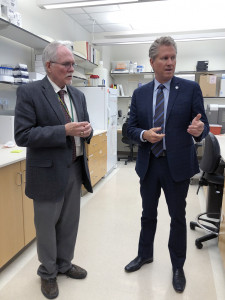 “What we’ve been doing is trying to increase the ability for your prototypical laboratory to spool up to do five to ten times the number of tests that they can actually run on a given day, using the same number of medical laboratory personnel,” he says. “You can’t just recruit people off the street because this is a very complex molecular test. This isn’t like a pregnancy test that you can do at home and have a result in two minutes. Medical laboratory scientists have to be certified by the ASCP and licensed by the federal government.”

The ASCP is almost 100 years old and represents about 100,000 pathologists and medical laboratory scientists with a goal of pushing best practices and educating its members to stay ahead of the curve to diagnose patients correctly. It also represents researchers developing new tests and vaccines. The good news about the coronavirus vis a vis a vaccine is that it doesn’t seem to be mutating very quickly like the flu virus does.

“The slower it mutates the higher the probability that a vaccine will be effective,” notes Holladay, who earned a master’s and Ph.D. in pathology from The Ohio State University before going on to a career in cancer research at the Medical University of South Carolina. In 2005, ASCP, which is based in Chicago, hired him to become its chief science officer. He became CEO 10 years ago, and he says it was his education at the College that prepared him so well for the position.

A biology major from North Augusta, South Carolina, Holladay calls his time at CofC the most formidable experience of his life. Not only were his biology professors the best in the region, but the liberal arts education made him a holistic thinker.

“It has given me a major advantage over individuals who’ve gone to different schools because they think more linearly,” he says. “The College turned me into a thinker, not just a cookbook scientist, but a person who can think analytically and then holistically to come up with solutions to problems. That was the power of the College of Charleston. It really transformed my life. I couldn’t do what I’m doing right now if not for that education.”

Holladay was a member of Kappa Sigma Fraternity when he met a native Italian student by the name of Augusto Pellegrini on campus in the fall of 1981. Although they lost touch for 30 years, they reconnected in 2013, and when Northern Italy was hit especially hard by the coronavirus in March, Pellegrini reached out to Holladay for help obtaining personal protection equipment and ventilators desperately needed at the hospital his family foundation, Fondazione Pellegrini Forlivesi, supports in the Lombardy region – the hardest hit area of Italy.

“He immediately went to work with his staff in Chicago, and in a few days, they were able to send us 58 of these lifesaving machines,” says Pellegrini. “The hospital, the doctors and I were immensely moved by this gesture. We were feeling outright alone in the face of this invisible monster. Our government did not send us anything; the doctors and nurses did not have surgical masks; our European partners had blocked the borders and did not send any relief, and here comes ASCP that donated the lifesaving ventilators, which helped saved more than 100 lives. It will never be forgotten.”

In turn, the Italians shared a lot of their experiences and data, which no doubt helped save some lives in the United States.

“Two fraternity brothers created an international opportunity to help save lives in both of their countries,” says Holladay. “You take a blood oath with your fraternity brother to always support each other, and that commitment allowed us to help both of our countries. It’s a pretty cool story.”

One that’s definitely worthy of the front page.