Marina Drazba ’05 has self-quarantined in a hotel in Folsom, California. She flew back from Bangladesh earlier this spring after her contract as a disaster risk reduction specialist with the United Nations High Commissioner for Refugees (UNHRC) ended.

With severe travel restrictions in place in New Zealand, Drazba couldn’t return to the University of Auckland where she is a doctoral student in the university’s civil and environmental engineering program and her insurance was cancelled outside of the country. In light of the current pandemic, she didn’t want to assume the risk of not having insurance, so she returned to stay with her grandfather in California.

Marina Drazba walks through a camp in Bangladesh in 2019.

Drazba, who lives by Louis Pasteur’s famous saying, “Fortune favors the prepared mind,” has built a career mitigating the risk of landslide disasters, but the process she uses can be applied to any disaster mitigation, including the COVID-19 pandemic.

“Knowledge of the hazard can help the reduction of the risk,” says the College of Charleston geology alumna. “If you don’t do a good job in preparation, you won’t mitigate the risk. That said, creating a mitigation program takes a lot of time and energy. You need to make sure your target audience is not only aware of the risk, but also understands the implications. Then you need to prepare for the potential risk, which is often viewed by many as a nebulous thought.”

RELATED: Watch Drazba talk about her work in a video for the United Nations Office for Disaster Risk Reduction.

In her role with the UNHRC, Drazba spent time studying both the native population and the displaced population of Rohingya from Myanmar with the goal of raising awareness about the risks of landslides and other natural disasters in the area. She built relationships with trusted people in the community and studied how they learned information. She discovered that the women, who are largely illiterate, can learn through their children. Children also help reinforce the message through repetition.

“Key to your success is showing good will and becoming a trusted source,” adds Drazba. “You need to make sure you incorporate what the native population knows and, in the case of Cox’s Bazar in Bangladesh, what the displaced people know. Then you need to take the complex topic at hand and distill it down to something tenable.“ 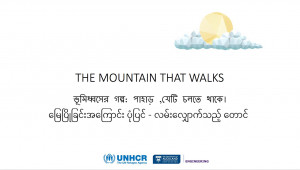 Marina Drazba created the book ‘The Mountain That Walks’ to promote awareness about how to lower the risk of landslides in Cox’s Bazar.

Drazba decided to create a picture book that could be used during story time, simultaneously teaching both children and their mothers. When coming up with the concept and design, she knew that because both populations are largely Muslim, no pictures of people could be used. The result is a 25-page picture book titled The Mountain That Walks, which explains how to mitigate against the risk of landslides.

RELATED: Read The Mountain That Walks.

“There is a fine line between fear and indifference,” says Drazba. “You want to provide just enough information so that if people see signs that may cause a potential landslide, they know some solutions to thwart it. The whole thing is that the decisions need to be made by your target audience. They need to be the ones to enact the concepts.”

Drazba’s risk mitigation efforts have been met with success in Cox’s Bazar. It has required enormous patience and trust in the process — things that we understand all too well right now.

Tagged with: alumni • Department of Geology and Environmental Geosciences • homepage-feed • school of sciences and mathematics