All the kids in the Queens, New York, neighborhood were so terrified of their leather jacket–wearing, tattoo-covered, motorcycle-riding neighbor that, if they were outside shooting hoops and the ball went into his yard, they’d just go buy a new one. So, when 10-year-old Robert “Bob” Frash‘s younger brother boldly walked across the street and retrieved the basketball from his neighbor’s yard, it made quite an impression – one that still impacts Frash’s life today.

“The guy liked that my brother wasn’t afraid, and they became friends. He gave my brother a mini-bike, and before long, he was doing wheelies up and down the street,” laughs Frash, whose love for riding grew from there, with the brothers eventually spending every weekend competing in dirt bike races. “It consumed our lives.”

But then life happened: Frash grew up, got married, pursued a career as a restauranteur and stopped riding.

Fast forward a few decades, and the associate professor of hospitality and tourism management is back on a bike – this time, though, it’s a motorcycle.

“I started watching all these YouTube videos of adventure motorcycles, and in 2014 I bought a bike,” says Frash. “I was 60 years old and thought, ‘It’s now or never.’ Now every spare minute I get is on the bike.”

One of his favorite places to ride is the Blue Ridge Mountains in North Carolina, because of the twisty, scenic roads. When he can, he travels to the Smoky Mountains for biker rallies, which include live music, group rides and camping under the stars – though, he admits sheepishly, sometimes he sneaks off to a nearby hotel after everyone’s asleep and then returns to the campsite before they awake. 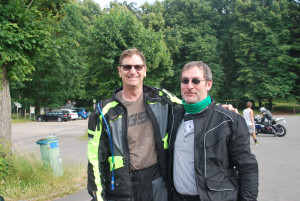 Frash has combined his passion with his professional expertise in tourism to document motorcycle culture – see, for example, his 2018 article in Tourism Recreation Research: A Multidisciplinary Marketing Profile of Motorcycle Tourists: Explorers Escaping Routine to Find Flow on Scenic Routes.

He continues to research motorcycle “drive” tourism and believes there is an economic opportunity for rural areas to take advantage of the bikers – who, these days are largely affluent, well-educated, mainstream citizens – traveling through their towns enjoying the views and stopping to eat, shop and occasionally spend the night at a hotel.

“With motorcycles,” he says, “it’s not about the destination: It’s the route that matters – and the sights along the way.”

Frash describes the feeling of riding as freeing, adding that bikers refer to people driving in cars as “cagers” because they don’t get to experience their surroundings. They’re not feeling the breeze on their face, not smelling the fields of flowers, not seeing the trees and hills: They are just moving from one place to the next.

Getting out of his classroom and “cage” is well worth the danger of the sport, says Frash, who is very safety conscious, always suiting up in full gear – a helmet, gloves, pads and protectors.

Besides, nothing could be more terrifying than his childhood neighbor – and it’s all thanks to him and his brave little brother that he has found so much joy on the open road.