Halsey ‘10/10’ Exhibition Reflects on a Decade of Art

When it moved into the Marion and Wayland H. Cato Jr. Center for the Arts in 2010, the Halsey Institute of Contemporary Art finally had the space it needed – not just to host artists and display their work, but to expand its reach and stretch its vision for the future. And now, a decade later, the Halsey is taking a moment to look back and celebrate the shows and projects it has brought to the College of Charleston in the space of 10 years. 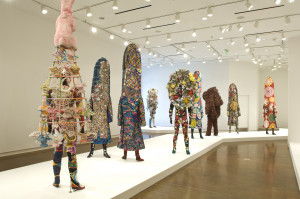 Nick Cave’s exhibition, Call and Response: Africa to America, at the Halsey in 2010.

Featuring virtual content and artist interviews, the Halsey Institute’s 10-week project, titled 10 /10 – Reflections on a Decade of Exhibitions, is running entirely online from Monday, June 15, 2020, until Sunday, Aug. 23, 2020, – each week exploring a different year of its exhibitions, partnerships and programs in the Cato Center.

“In the past 10 years, the Halsey has really come into its own,” says Mark Sloan, director and chief curator at the Halsey Institute, which occupies two interlinked gallery spaces, a dedicated media room and a library/resource area. “Having the new space in Cato has had a profoundly positive impact on us. We are finally able to show challenging work in a proper museum environment without having to compromise. We have always shown challenging work, but we are now able to deliver that art in much more accessible ways. And, we are much more thoughtful and purposeful about everything.”

And it shows: The Halsey Institute received the Elizabeth O’Neill Verner Governor’s Awards for the Arts, the highest honor the state gives in the arts, in 2012, and it has also received national press in the Wall Street Journal, Garden & Gun, The Guardian, TIME and The New York Times.

Perhaps most important, says Sloan, the Halsey has “become an invaluable community and campus asset. … I think the public is becoming aware that art can be catalytic in social change and is embracing it as something that is both necessary and inspirational.”

“The intriguing visual works created by adventurous artists from around the world can lead to meaningful conversations in our direct community and have a lasting impact on people’s daily lives,” she says. “That spark, with art as the catalyst, is what we are hoping for with each exhibition.” 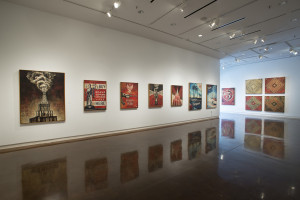 The Halsey Institute has played host to all sorts of inspiring exhibitions and artists over the past decade – from an Indonesian shadow puppet show to an installation made entirely of salt, from under-recognized artists to big names like Shepard Fairey and Jasper Johns.

RELATED: Find out more about the Halsey Institute of Contemporary Art’s exhibitions and programming over the years.

“The Halsey staff thinks of its exhibition program as if it were a grand buffet with tempting salads and soups, tantalizing entrees with interesting side dishes and decadent desserts. We occasionally throw in a really nice kale salad or a mind-bending tofu stir fry with our entrees to mix it all up,” says Sloan. “In other words, we try to provide a balance.”

And its retrospective 10/10 exhibition will have the perfect balance.

“I hope that people will have a deeper understanding of the work that our staff has done at the Halsey Institute over the last decade,” says Bryan Granger, the Halsey’s director of exhibitions and programs, who is overseeing the 10/10 project. “Exhibitions usually pass by slowly, so this is a great way to be able to see everything we’ve done at a glance, making it easier to comprehend the wide range of voices and art forms that we’ve been able to present to Charleston.” 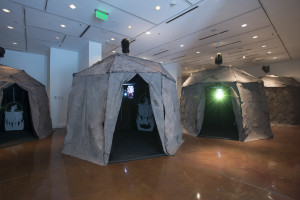 Böhler and Orendt’s The Carrion Cheer, A Faunistic Tragedy installation at the Halsey in 2018.

And now – with the 10/10 exhibition entirely online – the Halsey is able to present these exhibitions beyond Charleston, too.

“While the experience of virtual exhibitions is not the same as that of seeing art in person, there are benefits, including allowing much greater access to people all around the world,” says Granger. “We hope that this format will help people who have never heard of us become familiar with the work we’ve done.”

Having that kind of reach only gives the Halsey more space – stretching far beyond its gallery walls.

“I hope that our solid foundation will be the basis for even more exploration, experimentation and representation,” says Biswell. “We want everyone to find something that reflects their experience in our programming while being intrigued by and subsequently ignited by an artist or lecture that they didn’t initially think they would connect with. 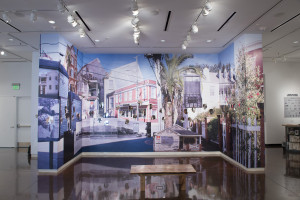 Katrina Andry’s Over Here and There is Me and Me installation at the Halsey in 2019. (Photo by Rick Rhodes)

“Artists have the wonderful ability to digest information and present it to us in a new framework or from a vantage point that we may miss in our own bubbles of existence,” she continues. “I think contemporary art will continue to tackle social issues with unconventional materials. They will continue to help us frame these issues in a new light and inspire research, conversation and action.”

Adds Granger: “It’s clear that the Halsey has been functioning as a space for people to think about and discuss these issues with others.”

And it will continue to do so now in its virtual space – and for the next 10 years to come.