By Tom Cunneff|2020-07-13T09:39:38-04:00June 24, 2020|Academics, All News|Comments Off on Award-Winning Math Major is a Real Rock Star
Robert Mignone has taught mathematics for 50 years, 40 of them at the College of Charleston, and he has this to say about student Jay Van Raalte: “She is the best mathematics student I have ever had.” It shouldn’t come as a surprise, then, that Van Raalte was a shoo-in to be this year’s recipient of the Department of Mathematics’ top honor, The Ewa Wojcicka Award, named after a beloved professor who died way too young in 1996 after a car accident. The award recognizes students who display exceptional ability, creativity and potential in mathematics. “Needless to say, the award means a great deal to us,” says Mignone. “Jay so perfectly fits the paradigm of the award.” Like Wojcicka, Van Raalte can see the beauty in math, says mathematics professor Alex Kasman. “Often students in a math class are too focused on their grades to notice those other sorts of things,” says Kasman. “Ewa was a talented researcher who had a deep and contagious love of mathematics that she shared with her students. The math department tries to choose someone like her to receive the award named in her honor. Jay also finds joy in mathematics and is able to convey that to students, which is what makes her such a good tutor. She was an obvious choice to be this year’s recipient.” What’s really interesting, however, is that Van Raalte has no plans for now to pursue a career with her math skills after she graduates a year early in August. That’s because she’s not just a math star. She’s also a rock star. Van Raalte can shred an electric guitar as well as she can solve a non-Euclidean geometry problem. She started a band, Jump Castle Riot, in high school, and played all through college, including shows in New York City and Nashville. The band has put out two albums, and Van Raalte just released her first solo EP titled “Linearity.” In 2018, Charleston City Paper voted her “Guitarist of the Year.” And she’s amassed more than a quarter million song streams. “It’s been an amazing journey,” she says. “I’m very excited about what I’ve been able to do so far and where I’m going.” Right now, that would be finishing up her math degree, which includes a minor in geology, before concentrating on music full time. But she isn’t really dreaming of the Big Time. At least not yet. Her immediate goal is just to find enough work as a hired gun guitarist, while tutoring math and teaching guitar. “I try to keep my goals small and manageable, and even those seem a little bit unbelievable at times,” she says. “I’d like to be successful enough that I can keep playing guitar. But beyond that, I’d like to go do some tours. I’d like to see more of the world. I’d like to make more records that I’m proud of. I have no interest in being a solo star. There’s just music that I have to make.” Two of the five songs on her new EP, “Linearity,” she wrote in Nathan Michel’s Songwriting class in the School of the Arts her freshman year (she also took his Introduction to Audio Production course this past semester). “She came in to both classes with significantly more experience than many of the other students but was always eager to learn more,” says Michel. “She’s always very humble and willing to share her knowledge and experience with her classmates – and professor. The songs on her new EP, to my ears, have more of an ’80s and ’90s vibe in terms of songwriting and production, while her older songs seem more influenced by traditional blues and rock and roll. This willingness to try on different musical styles, production techniques, chord progressions – to be a creative omnivore – is the mark of a mature artist, and it’s a good sign that Jay will have creative fulfillment – and a chance of success in the music business – in the years to come. Shredding on the guitar doesn’t hurt, either.” 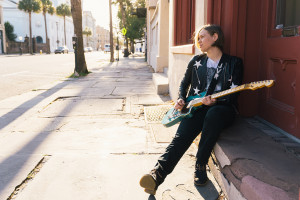 Jay Van Raalte is a co-founder of the band Jump Castle Riot. (Photo by Mike Ledford)

The only daughter of two Charleston lawyers, Van Raalte started playing guitar at age 13, inspired by her guitar-playing dad. He also got her interested in surfing, and it wasn’t long before she was winning competitions. One memorable weekend when she was 15, she competed in the State Championship at Folly Beach during the day and played the Windjammer on Isle of Palms at night. She won the title and wowed the audience – but she also had an epiphany. “I started realizing that you could not have two major priorities,” she says. Surfing and rock ‘n’ roll go together but math? Turns out both her maternal grandparents were math professors at Wells College in Upstate New York. She used to do all her math homework via video chat with her grandpa growing up. “People have an intrinsic phobia of math,” she says. “They do not like it, which makes me sad. They like me right up until the words ‘math major’ come out of my mouth.” Van Raalte completed her high school online with Connections Academy while doing the dual enrollment program at CofC, which is why she’s graduating early. “I tend to downplay my mathematical achievements in favor of music, but I’m ridiculously proud to have won The Ewa Wojcicka Award,” she says. “Math is a huge part of who I am, and although I won’t rule out grad school in the future, approaching the end of my math-filled college days has been bittersweet. Getting such an honor from the math department helped me feel like I accomplished something to be proud of, even without pursuing a Ph.D. That door definitely isn’t fully closed.” The stage door, meanwhile, is wide open.