For Alumnus, Charity Begins at Home

Last winter, not long after he was inaugurated as the College of Charleston’s 23rd president, Andrew T. Hsu paid a visit to distinguished alumnus Dr. Gary Thomas ’83. Hsu brought his wife, Rongrong, and two of his four daughters for lunch at Thomas’ waterfront home on Hilton Head Island. They sat eating on the patio of Thomas’ Charleston-style home overlooking the Intracoastal Waterway, enjoying a cool, crisp day in the Lowcountry.

But, you can be sure Hsu didn’t make the two-hour drive to Hilton Head just to have a leisurely lunch. He was there to tell Thomas about his ambitious plans for the College and to seek his advice and support, which immediately caught Thomas’ attention. One of the leading oncologists in the state, if not the country, Thomas was so impressed with Hsu’s transformational vision for the College and leadership skills that he not only agreed to become part of Hsu’s informal advisory board, but he also made one of the largest donations in the history of the College. On CofC Day, a 24-hour day of giving  on Jan. 30, 2020, Thomas bestowed the very home Hsu visited along with some other property – currently worth $2.5 million – in an estate planning gift. 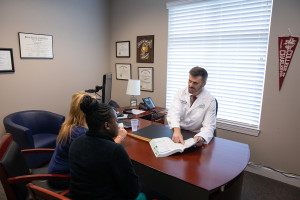 “He’s just so impressive to me,” says Thomas, who graduated from the College with a B.A. in chemistry. “He wants to transform the College and make it into an institution of national, even international, renown. I don’t see why it couldn’t happen with his leadership, but he needs the support of alumni, which is another reason why I thought I should step up.”

RELATED: Learn more about Thomas’ career as an oncologist.

The money is currently earmarked for the J. Gorman ’43 and Gladys Thomas Endowed Memorial Alumni Scholarship, the pre-med scholarship Thomas started in his parents’ name in 2011. That could change if there’s a greater need elsewhere, like in attracting more Honors College students with scholarships.

“President Hsu keeps saying we really need to increase enrollment in the Honors College because those are the superstars who are going to lead the way for the College to take the next step,” says Thomas. “If he said, ‘We really could get a lot more mileage out of this if you sponsored the Honors College,’ I would be up for that.”

In addition to a financial impact, Thomas also hoped to make a bit of an inspirational one. Taking a break from his heavy workload with patients to chat about his gift, he doesn’t hide his disappointment over the fact that so few of the fellow alumni he knows give back to their alma mater.

“I thought maybe if they found out about this it would motivate them to get more involved,” he says. “If I croaked tomorrow, my scholarship would probably be the largest one at the school, which I was happy and sad about because why aren’t other people doing this?”

RELATED: Read about past recipients of the J. Gorman ’43 and Gladys Thomas Endowed Memorial Alumni Scholarship.

He also loved the symbolism of making his gift on CofC Day, the College’s first-ever 24-hour day of giving held on the 250th anniversary of its founding in 1770. 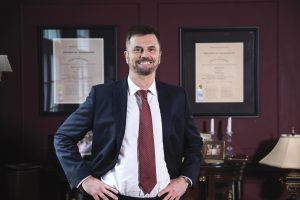 Dr. Gary Thomas earned his bachelor’s in chemistry from CofC before earning his medical degree from the Medical University of South Carolina.

“The United States wasn’t even a country at that point,” marvels Thomas. “I love bragging that three of our founders signed the Declaration of Independence and another three were signers of the Constitution. These are amazing historical facts. I just thought what better day to make an impactful donation?”

To Thomas, it all comes back to great leadership and thinking big.

“The College is trying to get to where it should be as a national, international university and not some small, little College,” he says. “In the old days, people were thinking let’s make this the best college in South Carolina and I’m like, ‘Why can’t we be the best college in the region and then the United States?’ Not that I think we’re going to become Harvard, but if you don’t set your sights high, you’re never going to achieve greatness, and I think that’s what he’s shooting for.”

Sometimes all you have to do is show up for lunch and ask. People will surprise you.