Words matter. Not just their meaning, but also the cultural significance of the languages used to speak them. For Madison “Madi” Crow ’20, her interest in the indigenous languages of Latin America started with an internship through the organization Student Action with Farmworkers (SAF).

Crow learned about the internship program through the College of Charleston’s Department of Hispanic Studies and signed up for the SAF Into the Fields Internship the summer after her junior year. Her responsibilities included teaching migrant adults and children how to speak English. She quickly realized that as indigenous language speakers her students struggled with a double language barrier. Not only did they need to learn English to become a part of the English-speaking community in the area, but they also needed to learn Spanish to become a member of the Hispanic community in Charleston.

And the language barriers became even more critical for those sending their children to school or perhaps needing to find work. During her senior year at the College, Crow volunteered at Midland Park Primary School, a predominantly Spanish-speaking school in North Charleston, South Carolina, where the language challenges were clearly visible. 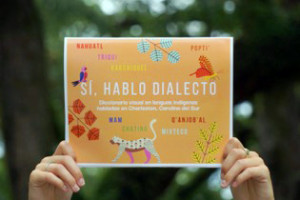 “Despite having little to no data on what indigenous languages are spoken here and by who, I found myself encountering languages like Mam and Triqui,” says Crow, who double majored in international studies and Spanish and minored in linguistics. “Not only are these languages being hidden, but the individuals are also mostly invisible to the rest of the Charleston community.”

These issues became the foundation of Crow’s Honors College bachelor’s essay. Working with Ricard Viñas-de-Puig, assistant professor in the Department of Hispanic Studies’ linguistic studies program, she explored these communities and interviewed 15 different speakers of eight Latin American indigenous languages. In the end, she identified a total of 14 different indigenous languages spoken by 40 individuals in the South Carolina areas of North Charleston, Johns Island, West Ashley and Monck’s Corner.

The next question Crow wanted to answer was how could she help? What could she do to raise awareness about the variety of indigenous speakers in the Lowcountry, and – more importantly – how could she help these people feel a sense of pride about their languages? Her answer is a children’s picture book titled Si, Hablo Dialecto or “Yes, I speak a dialect,” which she published in June 2020. This visual dictionary includes the languages: Mam, Triqui, Nahuatl, Kakchiquel, Q’anjob’al, Mixteco, Chatino and Popti’.

“I chose the title to address a specific issue. When I was interviewing participants for my research, each person used the term ‘dialecto’ or ‘dialect’ when referring to their own indigenous language. Despite the fact that all of these are full-fledged languages, both the speakers of the languages and those who don’t speak them use this terminology throughout Latin America,” says Crow. “Referring to these languages as dialects has been a part of a history of discrimination against indigenous languages in Latin America for hundreds of years – implying that while Spanish is a language, indigenous languages are not equal to Spanish and therefore not full languages.”

Crow received a Major Academic Year Support grant through the College’s Office of Undergraduate Research and Creative Activities, which helped fund her research during both the interview process and the printing of the visual dictionaries. The Linguistics Studies Program also helped fund the printing of the books. With that support, she was able to print 75 copies and plans to distribute them to the people she interviewed, as well as organizations like the Our Lady of Mercy outreach program, the Abrazos program in Midland Park Primary School and the students she worked with.

“The speakers of indigenous languages that I interviewed were a vital part of this process. The books were made for them and with their input on what would be most helpful for them as indigenous language speakers,” says Crow. “While I executed it, this book would never have been possible without their willingness to share with me and give me some of their time.”

For Viñas-de-Puig, seeing Crow take charge of the project and create something tangible to support indigenous speakers in the Lowcountry has been deeply rewarding.

“Madi is not only an excellent, hard-working student who completed an outstanding bachelor’s essay, but what’s even more important than her academic achievements is that her project, resulting in this beautiful visual dictionary, is likely to have an impact in the local immigrant Hispanic community and beyond. Her work raises awareness about the presence of many indigenous languages that otherwise would remain unseen,” he says. “Thanks to Madi’s work, speakers of these languages know now that their languages are visible, are recognized and are a part of their cultural heritage that they must be proud of. For me, I feel honored to have had the opportunity to work with Madi and to witness firsthand the impact of her project.”

In the fall, Crow plans to travel to Spain to teach English through the Cultural Ambassadors: North American Language and Culture Assistants program. Her job will take her away from these migrant communities, but her passion for the work will remain.

“My hope for this project is that the migrant adults and children will feel a sense of pride, instead of shame, about their native language,” she says. “Even if it’s just one person, the project will have been worthwhile.”

Students, faculty and staff all wearing masks on campus.

Clyde the Cougar wears a mask for the Cougar Pledge at the College of Charleston.

"On October 3rd, he asked me what day it was. It's

Near or far, #CougarSpirit wherever you are 🐾