CofC Opera from College of Charleston Foundation on Vimeo.

Through its dramatic narrative and music, opera offers a powerful and emotional experience. It incorporates every aspect of art – dancing, theater, art composition, singing and orchestra. So why aren’t there more opera lovers? Most of the time, it’s because people haven’t had the opportunity to experience it for themselves.

Under the leadership of Assistant Professor of voice/opera Saundra DeAthos-Meers, the College of Charleston plans to change the tide on opera by introducing more people to this dynamic art form. DeAthos-Meers’ program already offers children’s opera for local elementary schools, but the frequency of full-scale opera has been limited due to the overwhelming production costs.

But that is poised to change, as the College plans to expand its opera offerings to one fully produced opera a year. Complete with a full orchestra, sets, costumes and technical support, the prospects for students are endless. They will have the chance to experience the complexities and joy of putting on a full-scale performance.

One of the largest opera productions ever held at the College took place in 2013, and out of the performance of The Marriage of Figaro rose two stars who are now making a name for themselves: lyric soprano Ashley Fabian ’13 (artist certificate ’15) and baritone Nathan Matticks ’12. And these alumni, who are working hard to shine a light on the art they love so much, are excited to see operatic performances take center stage at their alma mater. 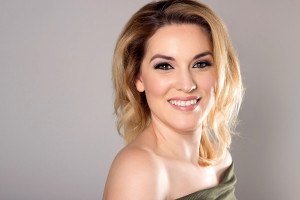 Ashley Fabian grew up singing. In fact, she comes from a family who all took private voice lessons. While no one else in her family sings professionally, Fabian’s father, who studied opera, sings as part of his job as a worship and administrative pastor.

“I had a classical voice teacher, and I found I was quite good at classical repertoire,” explains Fabian. “Still, I wanted to audition for American Idol, with the idea that if I didn’t make it, I would stick with opera.”

Fortunately for opera, Fabian didn’t land a spot on American Idol, and her private voice teacher highly recommended that she meet with the then College of Charleston head of opera, Deanna McBroom for a lesson.

“After one hour with Professor McBroom, I felt like a better singer,” says Fabian, who decided to attend the College that day. “I found more value at the College of Charleston versus a larger conservatory. I received individualized attention, which allowed for more focused training.”

The recipient of the Lee Harwood Scholarship for Music, Edwina Eustis Dick Endowed Scholarship, Hale-Westbury Scholarship, School of the Arts Scholarship and CofC Fund-Area of Greatest Need scholarship studied with McBroom for the six years she spent at the College. The highlight of her time at CofC was performing in The Marriage of Figaro. 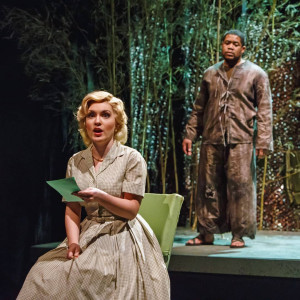 “Playing the role of Susanna was very challenging,” says Fabian, who majored in music. “It is the longest soprano role in opera and helped prepare me for a successful career in opera.”

Still, Fabian wanted to finesse her craft even more. She went on to earn a master of music from The University of Cincinnati College – Conservatory of Music.

“It was more intense and competitive, but I felt prepared because of my experience at CofC,” she says. “The music faculty are all very accomplished, and they passed along useful training to prepare me for an opera career.”

Her dedication has resulted in an award-winning operatic career. Since 2012, Fabian has played roles in more than 25 operas. Based in Los Angeles, she has an agent in New York and opportunities to perform all around the country keep pouring in. 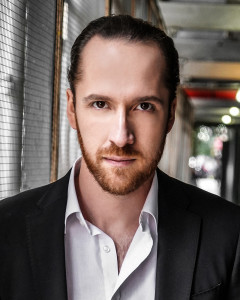 Nathan Matticks, who attended the Charleston County School of the Arts high school in North Charleston, set his sights on CofC when it was time to apply to college.

“I didn’t get in originally, so I joined the College’s Bridge program with Trident [Technical College],” says Matticks, who is not one to shy away from rejection. In elementary school, he had to audition for the choir three times before he was admitted.

After joining the College’s Concert Choir under Director of Choral Activities Robert Taylor, Matticks decided he wanted to be a choir director.

“Fortunately, Robert Taylor saw something in me and let me join the choir,” says Matticks. “It was a wonderful match and helped me make the transition into the College.”

Matticks, who majored in music, went on to benefit from multiple mentors at the College.

“Robert Taylor kept music in my life when I first came to the College, and then David Templeton took the reins,” he says.

Templeton, a baritone who was transitioning into an academic career as an associate professor of voice at the College, mentored Matticks throughout his time at CofC.

“We did everything together,” says Matticks. “I helped build sets, put up lights … you name it.”

With guidance from Templeton, Matticks realized that opera was what he wanted to do. He put a lot of work and effort into honing his craft, practicing three to four hours a day. His first full production at CofC was in the comedic opera Gianni Schicchi.

Then, in his junior year, Matticks received the Sharp Scholarship.

“It was nice to have all my hard work acknowledged,” he recalls.

After graduation, Matticks stayed on to bolster his resume by performing in The Marriage of Figaro before moving to New York City. 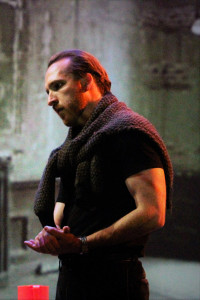 “I wanted to see where my voice stood and there is no better place to go than New York City,” he says. “It was a whole new set of learning, but I stood tall and got lead roles in small companies in the city. Of course, I needed a voice coach and fortunately Professor Templeton’s best friend, Scott Flaherty, took me to the next level of where I needed to be. Now I sing around the U.S., and I hope to get into the European market.”

The award-winning Matticks has performed in more than 15 major operas as well as a performance at Carnegie Hall.

“Ashley and I made the most of what we had,” says Matticks. “With an enhanced opera program, I hope that more students will make the most of the opportunities at the College.”

And what better opera to inaugurate this new operatic chapter at CofC than The Marriage of Figaro, the largest production ever put on by the College? Public performances are planned in 2021.