Edit-a-Thon Sheds Light on LGBTQ Life in the Lowcountry

On July 17, 2020, in the sweltering heat of a Charleston summer afternoon, Harlan Greene found some shade at the corner of Broad and Meeting streets. He was one of a few pedestrians at what’s known locally as the “Four Corners of the Law,” typically thronged by vacationers during the high season.

“You might look around these streets and you’ll see plaques and monuments to all parts of the city’s history, but you won’t see anything relating to the LGBTQ community’s history,” Greene says, gesturing to the panoramic hotspot of historical tourism. “That is what we’re doing in the archive, why we’re compiling materials and why we’re doing research –  to prove that Charleston has a long and storied LGBTQ history, right here.” 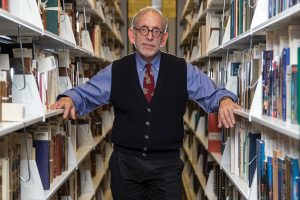 And so Greene, the College of Charleston Libraries’ scholar-in-residence, kicked off “The Real Rainbow Row,” a live-streamed walking tour of the peninsula’s LGBTQ sites. The event marked the conclusion of a new, weeklong campaign to increase awareness of these oft-overlooked Holy City stories: a Wikipedia Edit-a-thon.

Edit-a-thons are an effort to address gaps and inequities in Wikipedia content to create new articles, expand existing ones and add scholarly sources. For LGBTQ history, this is particularly important – Wikipedia is affected by a well-documented gender-gap and editor biases.

“It became clear to me throughout this process that Wikipedia reflects what a community considers to be important,” says Catherine Stiers, CofC Special Collections’ research and outreach specialist. “Because information on Wikipedia is completely crowdsourced, its articles are only as strong as its editors.”

Stiers adds, “Despite its issues, we know that researchers of all ages and backgrounds use Wikipedia as a jumping-off point for their work. If an inexperienced researcher doesn’t see a Wikipedia article for their topic, they might falsely assume that it isn’t important.”

Organized by CofC’s LGBTQ Life in the Lowcountry archival project and the Libraries’ Special Collections, the July 13-17, 2020, edit-a-thon drew volunteers from the College’s students and faculty as well as Charleston residents. 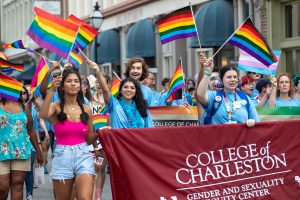 “Since I was teaching Introduction to Women’s and Gender Studies this summer, I thought the event was a great opportunity for students to be able to apply concepts they were learning in class to a real-world effort that supports the Lowcountry LGBTQ community,” says Christy Kollath-Cattano, assistant professor and associate director of the Women’s and Gender Studies Program. “I believe the effort in itself is important in showcasing the social justice work local organizations and volunteers are engaged in to fight for the rights of the LGBTQ community and for documenting their history in the Lowcountry because it is often erased in the dominant narratives.”

While Cougars know to avoid relying exclusively on Wikipedia for their research papers, the open-access encyclopedia is nevertheless the first step for many interested in learning about a new topic.

To reach the largest possible audience – including tourists visiting Charleston for the first time – the LGBTQ edit-a-thon was designed to promote increased awareness of Special Collections’ holdings, drive traffic to both digital and physical locations and bring together a virtual community of curious, engaged learners.

“We wanted information on Charleston’s LGBTQ history to be easily found by the casual user, for this history to be accessible outside of our archives and library databases and to improve or create these Wikipedia articles so that someone could stumble across this information without having to do their own intensive research to seek it out,” says Rebecca Thayer, LGBTQ Life in the Lowcountry’s project archivist. “On a personal note, growing up I had a sense that LGBTQ individuals only existed in big cities like New York or San Francisco, or that they might be on TV or in movies, but they didn’t exist in my life or my town. My own journey would have been easier if I had known that there were LGBTQ people who had lived out their lives in the same town as me.”

The edit-a-thon’s results speak for themselves: A total of 14 new articles, 116 expansions of “stubs” and 61 sources and references added, spanning organizational histories of LGBTQ groups such as We Are Family and the Alliance for Full Acceptance to biographies of LGBTQ advocates throughout Charleston’s past.

Take one example in particular: the 1958 homicide known as the “Candlestick Murder.” Referring to the killing of Jack Dobbins in Charleston, the acquittal of the confessed killer in the “gay panic defense” led to widespread fear in the city’s gay community.

Before the edit-a-thon, scant information and primary sources were readily available. Now, thanks to such Cougars as Grayson Flowers, the topic’s Wikipedia article is robust.

“I grew up here in Charleston and the ‘Candlestick Murder’ was something that I had heard referenced in passing and never really knew all that much about it,” says Flowers, an historic preservation and community planning major. “Projects like this are not only helpful to me in learning more about where I live, but also making the information accessible for those who want to be able to learn more and feel that their personal history as a member of the LGBTQ community is being told.”

For Flowers, William Faulkner’s maxim rings true: “The past is not dead. It is not even past.” 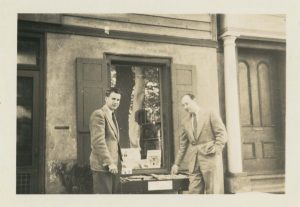 John Zeigler (R) and Edwin Peacock (L) at their bookstore, The Book Basement, now located on the CofC campus​. The John Zeigler papers are part of the LGBTQ Life in the Lowcountry collection. (Photo courtesy of Special Collections)

“I think recent months have shown the city, and the entire country for that matter, how important it is to consider what we chose to celebrate with monuments and what we chose to overlook,” says Flowers. “Places like the Book Basement show the strength of these groups when they were marginalized and forced to hide part of their identity just to avoid the tragic fate of the many people, like Jack Dobbins, whose names we may never know.”

The edit-a-thon is the most recent initiative of LGBTQ Life in the Lowcountry. Launched in 2018, the project, which is housed in the College’s Special Collections, serves to collect and share the stories of the region’s LGBTQ community, shedding light on this understudied population by collecting archival materials and recording oral histories. It is the first project of its kind in the Lowcountry.

More than 50 oral histories have been recorded and transcribed, with personal papers and archival materials dating back to the 1850s now calling Special Collections home.

“These histories would have been incredibly helpful for myself when I was a student at the College – all of us searching for a piece of ourselves in the pages of an under-documented history that often did not, and does not, tell the full story or receive proper attention,” says Taylor DeBartola ‘10, an alumnus of the communications program in the School of Humanities and Social Sciences. “I applaud the College for its efforts in this area because of the impactful ripple effect this has for the nearly one in five LGBTQ students at the College, their families, classmates and allies across all disciplines who now have this resource at their disposal.”

The project received generous initial support from the Gaylord and Dorothy Donnelley Foundation, but the tax-deductible support of donors – corporate and individual – is critical to continue its mission and become a permanent resource.

“I’ve chosen to support the LGBTQ Life in the Lowcountry project both with planned estate gifts and financial contributions, as well as by recording an oral history,” DeBartola says. “By delegating institutional funds to such initiatives as this project, the College is creating both an opportunity for recruitment and to truly live up to the ideals of our strategic plan: to be innovative, equitable and inclusive. We are just getting started.”

To learn about donating materials, recording an oral history or supporting the LGBTQ Life in the Lowcountry project, visit speccoll.cofc.edu/lgbtq.