Engineering Makes the Grade at CofC

This fall marks a major milestone for the College of Charleston: For the first time in its 250-year history, CofC will offer a major in engineering. A total of 30 students are enrolled to receive a B.S. in systems engineering — the first major of its kind in South Carolina. Systems engineers take a macro view of a project and are responsible for the concept, architecture and design.

“Over the last 10 years, the Charleston tri-county area has evolved into a high-tech manufacturing center,” says Sebastian van Delden, interim dean of the School of Sciences and Mathematics, which houses the systems engineering major. “As the local public university, we have the responsibility of providing talent to our economy.”

Indeed, engineers from Boeing, Bosch, Mercedes-Benz and others helped design the curriculum, while an industrial advisory board is in place to help ensure that it remains relevant to industry needs.

“Systems engineering is a rigorous degree program that appeals to technically minded students who enjoy building and modeling complex projects and systems,” says Department of Physics and Astronomy Chair Narayanan Kuthirummal, director of the Systems Engineering Program. “Modern engineering projects are large and complex, increasing the demand for systems engineers.”

But what will make CofC grads even more in demand is the school’s strong liberal arts education, which all systems engineering majors will get, too, just like everyone else.

“Engineers have to be able to work effectively in different environments with a variety of people from a variety of different cultures and backgrounds,” says van Delden. “Our graduates will be a little different from the traditional engineering school in that our students should have better communication skills to be able to integrate into these schemes while also being able to think about the broader, global context of what they’re trying to do.”

Next fall, the College will also start offering a B.S. in electrical engineering and hopes that others will follow. In fact, a robust engineering program is one of the College’s nine fundraising priorities that launched during its 250th anniversary-year celebration (CofC once offered a few engineering classes in the early 1900s but never a degree). The goal is to raise $4 million, with the majority of it going to support a founding dean, a nationally known leader tasked with expanding the College’s engineering offerings and implementing a new School of Engineering. (The dream is to construct a 40,000–square foot building on Pitt Street next to the library that would also house the Department of Computer Science, which now rents space at Harbor Walk.)

Other objectives include half a million dollars for scholarships and designing and outfitting an engineering lab with state-of-the-art equipment, software and instruments like the latest robotics technology. BMW has already made a donation to the program.

“At BMW, we are proud to establish the College of Charleston’s first endowed scholarship for systems engineering,” says Max Metcalf, manager of government and community relations. “We see this as an investment in South Carolina’s students as well as in our future workforce. Our goal is to help make an engineering education more accessible and affordable to students.”

Of course, it helps to have a new president who is an engineer himself.

“I am excited to see engineering launched here at the College of Charleston,” says President Andrew T. Hsu, who earned a Ph.D. in aerospace engineering at Georgia Tech. “There is so much possibility, especially with our unique liberal arts curriculum, to help shape and train a new type of engineer – one ready to tackle a wide range of issues. In my experience, engineering is a discipline that touches everything, and I think there are many opportunities for local industry to connect, partner and support this program so that we, together, continue to make Charleston one of the best cities for work and life in the country.”

Tagged with: homepage-feed • school of sciences and mathematics • systems engineering 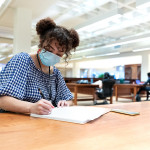 Student’s wearing masks and social distancing in the Addleston Library 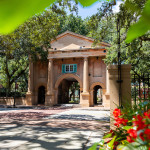 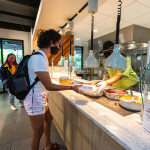 Students social distance in City Bistro, one of CofC’s cafeterias.

Clyde the Cougar wears a mask for the Cougar Pledge at the College of Charleston. 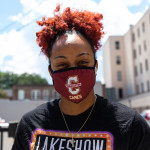 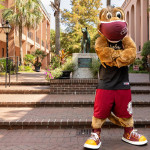 Near or far, #CougarSpirit wherever you are 🐾

“A sense of community is so important during the

Can’t get enough of these (almost) fall temperat

When your #CougarPride comes in all shapes, sizes,