100 Years of Women’s Suffrage: A Look Back at the Movement

One hundred years ago today, women’s voices were finally heard, their opinions finally given equal weight, their priorities finally afforded a chance to be reflected in the world: On Aug. 18, 1920, the United States ratified the Nineteenth Amendment, granting women the right to vote.

But, while the certification of the women’s suffrage amendment certainly signified a big moment in history, the real story lies in the decades both leading up to and following that day.

“There’s this notion that women were ‘given’ the right to vote by men instead of acknowledging the century of agitation by women in America,” says Sandy Slater, College of Charleston associate professor of history who specializes in U.S. women’s history. “Men concluded that women had ‘earned’ their right to vote because of their service in World War I. While notable and significant, focusing exclusively on the relationship to war negates the agency, suffering and determination of American women and their demands for suffrage well before America entered the war.”

How did the women’s suffrage movement begin, and how did it evolve over the years?

As women expanded their educational opportunities following the American Revolution, more and more women experienced “consciousness raising,” the awareness of inequities and how to agitate for inclusivity. Certainly, the Seneca Falls Convention of 1848 was the first large scale advocacy for women’s suffrage. Following the disruptions of the Civil War and Reconstruction, women renewed their efforts and reached out to create international coalitions with other women’s suffrage groups, particularly those in Britain.

The suffrage movement, dominated by white middle class women, began more aggressive tactics with the advent of the National Women’s Party (NWP) in 1916. Women of the NWP staged parades, chained themselves to the gates of the White House and went on hunger strikes – often leading to police brutality. It was really the involvement of women during World War I that signaled their capabilities. As white women achieved political enfranchisement, however, women of color continued to be isolated from feminist movements and struggled to receive political representation or consideration.

Women suffragists picketing in front of the White House in 1917. (Photo courtesy of the Library of Congress)

What were the biggest challenges to the movement?

There were two major fronts of opposition. First, a significant number of men felt challenged by women’s public political agitation and felt that it was contrary to the “natural” role of women as a wife and mother. These antiquated Victorian ideas resonated with men who feared losing the comforts of home, and resulted in a vicious campaign against women that portrayed them as prostitutes, insane and anti-family.

The other considerable resistance came from women themselves. White women, placed on a pedestal during the racism of Jim Crow, were reluctant to become engaged. These women preferred the protections and privileges afforded their race and gender to suffrage and the responsibilities of full citizenship.

What contributions did women in the Lowcountry make to the women’s suffrage movement?

Virginia Durant Young, originally from Fairfax, Virginia, transformed the suffrage movement in the Lowcountry in the 1890s. She organized women through suffrage advocacy as well as the temperance movement. She created the South Carolina Equal Rights Association (SCERA) and spread its membership throughout the state.

Twentieth-century advocates in the Lowcountry include Susan Pringle Frost, a supporter of historical preservation in Charleston, and Eulalie Chaffee Salley, who led the Charleston Equal Suffrage League (CESL) during WWI, working closely with allies in Congress. South Carolina didn’t ratify the Nineteenth Amendment until 1969 – but, at its passage, a then-elder Eulalie supposedly remarked, “Boys, I’ve been waiting 50 years to tell you what I think of you.” Sassy until the end!

What did the Nineteenth Amendment mean for civil rights in general?

The Nineteenth Amendment was simply another milestone in the enfranchisement of all Americans. During Reconstruction, the Fifteenth Amendment granted suffrage to all men, including recently freed slaves. Many suffragettes found this offensive, aligning themselves with racist notions of eugenics and white superiority. The two amendments were fulfillments of the American promise emblazoned in the Declaration of Independence and Constitution. However, men and women of color continued to face obstacles, including poll taxes, reading requirements, intimidation, violence and numerous other impediments. Even today, full enfranchisement remains elusive for people of color, immigrants and the poor as gerrymandering, intimidation and lack of access to polling stations run rampant. We are still far from achieving inclusive civil rights.

What do we know about women’s voting behavior in the years that followed?

Early American feminism presented a united front focused largely on the singular issue of suffrage. Following the Nineteenth Amendment, younger women embraced the decadence of the 1920s and embodied the “modern woman,” which included ideas of sexual freedom, mobility and a rejection of Victorian expectations of women. While culturally women were more visible and liberated, the feminism movement faltered. There was no longer a unifying objective, a source of pride among later 20th-century feminists who sought to include a variety of issues.

A significant portion of women did not participate in elections simply because of patriarchal notions of deference to husbands. Similarly, many women voted as their husbands, ministers or fathers instructed.

The devastation of the Great Depression and World War II combined to generate a neo-Victorian movement in the 1940s and 1950s – essentially an attempt to once again define acceptable womanhood in terms of maternity and marriage. It wasn’t until the 1960s and the modern feminist movement that women actively engaged in political participation. 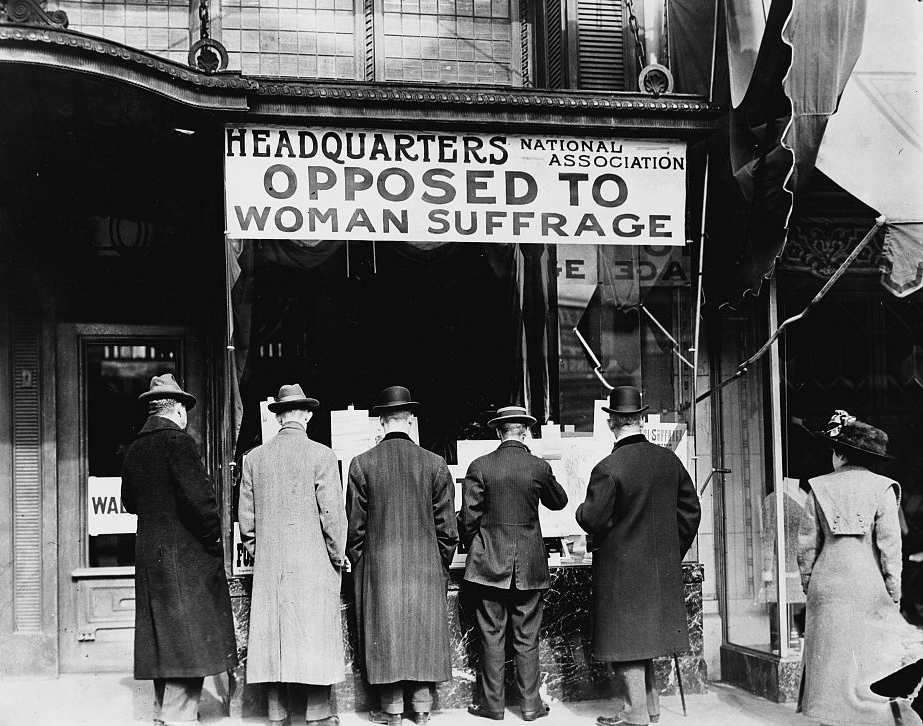 Men look at materials posted in the window of the National Anti-Suffrage Association headquarters in Washington D.C. circa 1911. (Photo courtesy of the Library of Congress)

How have women voters developed as an electoral demographic over the past 100 years?

The agitation of the 1960s and 1970s, the creation of the National Organization of Women, Ms. magazine and a number of other efforts designed to make the personal political, all encouraged women to evaluate their own lives and the inequities faced throughout the nation.

No longer about suffrage, the modern feminist movement embraced a number of issues, including sexual harassment, violence against women, child care, environmental protection, pay equity and dozens of other challenges. The array of issues brought groups of women into the political fold for the first time, feeling deeply connected because of the personal stakes. Again, the notion of consciousness raising is crucial.

Interestingly, the anti-feminist movement, led by Phyllis Schlafly, organized rapidly in the 1970s and 1980s as conservative politicians increasingly aligned themselves with evangelical interests. Despite their insistence that they themselves were not feminists, these conservative groups were led by women who actively lobbied Congress and became a political force, managing the defeat of the Equal Rights Amendment.

Conservative and progressive groups both embodied the feminist notion that women should be able to agitate and advocate for their interests. There’s not a unified block of women voters for several reasons, including the conservative backlash of women and the wide variety of issues that attract voters for different reasons.

In the 21st century, we are witnessing a new feminism that includes all genders, sexualities, races and religions. The Women’s March in Washington and the Me Too movement are indicators of the potential of women voters and show that feminism is alive and well, growing with each generation.

How do you think women’s suffrage will continue to shape the nation’s political and constitutional landscape?

I’m inspired by the young feminists (including self-identifying men) who march and advocate not only for issues traditionally relevant to women, but also issues that uplift people of color, draw attention to the environmental crisis, embrace sexual fluidity and freedoms, and understand that, where one oppression exists, we are all less.

Audre Lorde, a Black lesbian and active feminist, was an extraordinary embodiment of the intersectionality of women’s lives that are not simply defined by sex or gender – but by race, class, family history, geography, religion and a series of other intersecting oppressions. She understood and championed civil rights for all long before the movement caught up to her ideas. However, there remains a large conservative block of women who continue to vote against their own interests, preferring to embrace their “whiteness” as a badge of protection and superiority.

Looking at the trajectory of the women’s movement and suffrage, more and more women embrace their political potential, and each generation of women advances the cause further. Social activism is a hallmark of millennials and the upcoming generations. More women than ever are in Congress, and the legacies and work of Shirly Chisolm, Geraldine Ferraro, Hillary Clinton and now Kamala Harris demonstrate that women can be incredibly effective leaders and reach for the highest offices in America. It’s a beautiful thing to witness.

Featured image:  National Woman’s Party members picket outside the International Amphitheater in Chicago, where Woodrow Wilson delivers a speech on Oct. 20, 1916. (Photo courtesy of the Library of Congress)