Meet the Real Husbands of CofC

“Women, you don’t need your man’s permission to do anything.”

The conversation – which flows with ease amid good-natured teasing and bouts of laughter – is an honest look from a man’s perspective at how to navigate life with a girlfriend or wife, the difference between controlling your partner and having a partnership, and what it means to treat women with respect.

Whether it’s catcalling or telling a woman what to wear, to Sims the issue is this: “A lot of men try to assert their masculinity by objectifying women.”

Along with Joshua Hall ’14, these longtime friends – all College of Charleston alumni – make up The Real Husbands of CofC, a YouTube series that focuses on their lives as Black men, husbands and fathers.

“There’s a false narrative that the Black man is absent in the household as a husband and father,” says Sims, who married CofC alumna Serena-Kaye K. Sims ’14. “I say ‘false narrative’ because we used to say the narrative was that they’re not in the household, but they are. I observed many families where the father is in the home. While there is a fact that there’s a system designed to extract the Black man from the home, we won’t let that system break the cycles we are designing for our own legacies. Our goal is not to highlight what men should already be doing; it’s to show that these roles (husband and father) should be, and will be, celebrated by men.”

The series was born in 2019 out of a joke Sims made to fellow CofC alum Juan Ray ’16 about how the “real husbands of Charleston” would be attending the College’s annual alumni gala, A Charleston Affair. The idea piqued the friends’ interest, and the series started out with Sims and Ray hosting live conversations about fatherhood and marriage on Facebook.

From there, the concept grew into recorded videos and a YouTube channel called “The Real Husbands of CofC,” with each webisode focusing on the lives and perspectives of these college friends. Debuting on March 18, 2020, the first webisode, “Double Tapping or Nah,” is a lighthearted discussion about what kind of photos married men should like on Instagram.

And they each bring something different to the table. Sims is from Darlington, South Carolina; double-majored in communication and theatre; hosted two different radio shows through Cistern Yard Radio during his years at the College; and currently works as a customer success manager for software company Benefit Focus. Vickers, who is known around Charleston as “DJ Scribb” – a moniker he picked up when he first began DJing during his years at CofC, is a Charleston native, majored in middle grades education and works as a science teacher at Meeting Street Academy in downtown Charleston. Hall, who played on the College’s men’s basketball team, is from Florence, South Carolina; majored in elementary education; and worked as an elementary school teacher for a few years before taking on his current role as elementary experience coordinator for Seacoast Church in Mount Pleasant, South Carolina. And Quick, who performed a few stand-up comedy sets with Sims during their college years, is from Marlboro County in the Pee Dee region of South Carolina, majored in sociology and works as an associate director of admissions at CofC, with a focus on recruiting students from the South. In terms of family life, Sims, Hall (Kendal Hall) and Vickers (Ameerah Vickers ’12) have all been married for several years and each have children. Quick graduated from being a “husband in training” in November 2019, when he married Ciera Jones ’13. 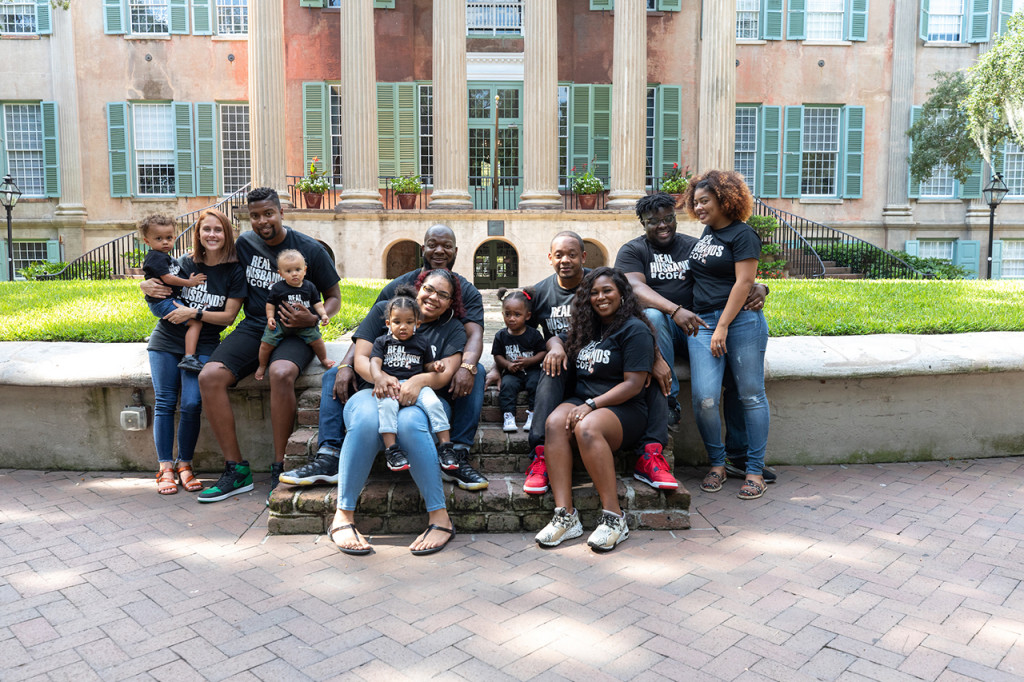 The group tackles topics ranging from current events surrounding social justice issues, a woman’s worth and fatherhood, among many others. And they’ve expanded their discussions to include guests such as former CofC men’s basketball star Andrew Goudelock ’11 and Ronald Daise of Gullah Gullah Island fame.

While they say their experiences and perspectives as Black men are definitely parts of their lives they want to highlight, the goal is bigger than that.

“I can say personally, for myself, when we are recording and doing the show, in the back of my mind I want to be a representation of what a real Black man looks like because sometimes people don’t see that,” says Hall. “A lot of times they see what people want them to see, they see the entertainment side. They don’t necessarily get to see what a real, everyday Black man is doing, thinking, feeling, when he gets home after work.”

And it’s about celebrating friendships, encouraging each other as husbands and fathers and taking away the stigma sometimes associated with family life.

“We want people to see that we hold each other accountable and we share our experiences with the hope that others will relate and take something useful from it,” says Sims. “We also want to add a sense of entertainment and fun to roles that most are not man enough to take on responsibly. Navigating marriage and fatherhood is not easy, but that doesn’t mean it can’t be enjoyable. People just need to see others having a good time doing it, so they can apply that to their own experiences.”

And it seems that current CofC students and young alumni are paying attention.

“I know in talking to some younger alums, as well as freshmen and sophomores, because I’m still at the College and in those scenes, a lot of them have said they watch the show and are like, ‘You actually make me want to get married,” says Vickers, who regularly DJs for CofC events. “A lot of youth have told me they’re not too sure about marriage, but then they’re like, ‘You’re making it seem like it’s possible.”