In the fall of 2019, six College of Charleston students got a real hands-on lesson in the art and science of brewing beer. And now Charleston beer lovers will get to taste the results from two of those students whose brew rose to the top.

The popular class the Chemistry of Alcohol, taught by Mike Cohen (hospitality and tourism management) and Jason Overby (chemistry), explores the workings of chemistry in the creation of alcoholic beverages, in particular beer. This is the third time the class has been offered, but the first time students got to participate in the commercial brewing process. All students who enroll in the Chemistry of Alcohol class must be 21.

“In previous iterations of the class, students have brewed their own beer to analyze in the lab, but they never collaborated with a brewery to brew a beer for production,” Overby says. 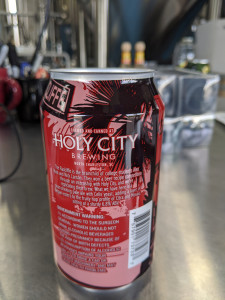 The winning beer, dubbed The Radcliffe, is inspired by Radcliffe Street, located a few blocks from the College of Charleston campus. (Photos provided)

Alex Huss ’20 and Nick Larson ’20 concocted the winning beer. Their brew, dubbed The Radcliffe, is a clean-drinking pale ale with Celis yeast, adding a layer of Belgian esters to the fruity hop profile of Citra and Mosaic, sitting at a sturdy 6.8% ABV.

The Radcliffe can be found in cans and on draft at Holy City Brewing at 1021 Aragon Ave in North Charleston, South Carolina. Chris Brown ’05, co-owner of Holy City Brewing, collaborated with the College to provide the location, equipment and expertise.

“Since starting Holy City Brewing in 2011, I’ve kept in touch with the science department at CofC and have always offered to help in any way that I could,” says Brown. “Whether that was donating beer, having an event or fundraiser at the brewery or getting students into the brewery to learn about beer. This partnership is a way to teach students about the science of brewing and give back to the College at the same time.”

The class culminated with a competition between three teams of students to determine the best beer. The winner was based on votes collected over 10 days in November 2019 at Baker & Brewer, a local brewpub in downtown Charleston.

For Huss and Larson, both of whom graduated in May with degrees in biology, it’s thrilling to see the final product.

“It feels amazing to have won this competition; it was such a close race too!” says Huss. “Our experience was absolutely incredible. We definitely could not have done it without the help of Chris Brown and the rest of the brewing team at Holy City. Talking to customers as they were trying our beer (without them knowing it was ours) was also really cool. It gave us a different perspective as to how the beer really tastes and their true feelings about which beer was the best.”

“It was great to work with the owners and employees at Baker & Brewer, who were a huge help before, during and after the brewing process,” he says. “They helped to make sure the beer coming out of the tap was the best beer we could make.”