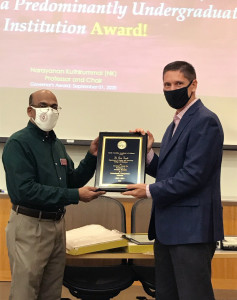 Narayanan Kuthirummal, chair of the Department of Physics and Astronomy, presents the South Carolina Governor’s Award for Excellence in Scientific Research at a Primarily Undergraduate Institution to Chris Fragile.

According to a proclamation from South Carolina Governor Henry McMaster, “Dr. Fragile is highly respected in his field, with an impressive record of accomplishments. His involvement of dozens of undergraduate students in cutting-edge computational astrophysics work sets a high standard for the state.”

Fragile is one of the world’s leading experts in numerical simulations of black hole accretion. The Cosmos++ code that he co-developed is one of the most capable tools in the world for simulating astrophysical phenomena. He has used this code to study scenarios from plasma jets triggering star formation in proto-galactic clouds to wayward stars being shredded by the gravitational force of a black hole. He uses his simulation results to stimulate and help interpret telescopic observations, bridging the gap between theorists and observers.

He is also the author of a widely cited review article on the foundations of black hole accretion theory.

“I was really amazed to learn that no one from the College of Charleston had won a Governor’s Award since Professor Charles Beam in 2003,” says Fragile. “There are so many people at CofC who excel in research in their field that I hope my award starts a string of wins for our very deserving faculty.”

In total, Fragile has authored over 70 refereed journal articles, 15 with undergraduate co-authors. He has secured nearly $1 million in external research grants, been awarded over 21 million hours on world-class supercomputers, mentored 15 undergraduate senior research projects and over 60 independent research experiences, and been invited to give talks at more than 20 international conferences.

Fragile received his Ph.D. from the University of Notre Dame in 2001. After postdoctoral appointments at Lawrence Livermore National Laboratory and the University of California, Santa Barbara, he accepted a faculty position at the College of Charleston in 2005.

The Governor’s Awards for Science program was developed to honor an individual or team within the state whose achievements and contributions to science in South Carolina merit special recognition and to promote wider awareness of the quality and extent of scientific activity in South Carolina.