How the Asian Longhorned Beetle (ALB) journeyed to South Carolina is currently unknown, but it certainly didn’t come by itself.

“The Asian Longhorned Beetle doesn’t typically fly far, so their major movement is through people moving wood,” says Matt Rutter, academic director of the College of Charleston at Stono Preserve and associate professor at the College’s Department of Biology.

The first U.S. sighting of the ALB was in 1996 in Brooklyn, New York. A gentleman saw holes in his trees with sawdust-like remnants around them. Thinking someone was vandalizing his trees, he kept vigil and found the culprit when a black beetle with white polka dots crawled out of one of the holes. 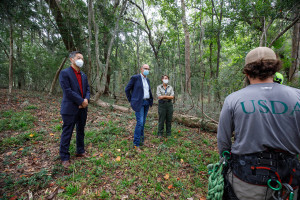 It took Brooklyn 23 years to eradicate the ALB, and it is likely that people transported the beetle to other parts of the Empire State. ALB has also been found in New Jersey, Illinois, Massachusetts, Ohio and now South Carolina. In May 2020, residents in Hollywood, South Carolina, reported finding an insect on their property. Shortly after, the beetle was discovered at Stono Preserve – the 981-acre property owned by the College of Charleston Foundation to support student and faculty research.

The Asian Longhorned Beetles’ preferred tree of choice is the Red Maple; they do not attack oaks or pines. As adults, they feed on the bark and twigs, and will chew a small notch in the bark of a tree to lay eggs. Once eggs hatch, the larvae bore their way into the tree, feeding on the growing layer and the inside of the tree. This larval feeding ultimately kills the tree — in as quickly as five to seven years, but some trees can hold on for longer.

Presently, other than destroying the tree with the larvae, there’s no cure against this pest, which hails from Korea and eastern China.

“In its native environment, the Asian Longhorned Beetle population is kept in check, but in the U.S. environment the beetle population expands quickly,” says Rutter. “As a result, without preventative measures we could be overwhelmed by the amount of damage these insects create.”

That’s why the U.S. Department of Agriculture (USDA) in collaboration with the South Carolina regulatory body for pest insects at Clemson University swooped down to map and tamp the South Carolina infestation. Since June, around 15 USDA staff have been hard at work to fight the ALB in South Carolina. College of Charleston leaders met with members of the USDA on Wednesday, Sept. 16, 2020, to discuss a path forward for combatting the beetles at Stono Preserve and the surrounding area. 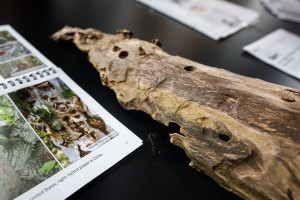 ALB larvae bore their way into trees to feed, ultimately causing trees to die. Bore holes can be seen in this sample of wood. (Photo by Heather Moran)

“Working closely with our partners, USDA has successfully eradicated Asian Longhorned Beetle in other states, and we will do everything we can to eliminate this pest from South Carolina,” says USDA’s Under Secretary Gregory Ibach. “But we need everyone’s help. If you think you’ve seen the beetle, report it. The more information we receive, the faster we can control this pest.”

The surest action to eradicate the ALB is removal of the trees that have been implanted with larvae. This is also best since the structurally weakened trees are often in danger of toppling.

A big help to the USDA investigation is its access to Stono Preserve, which is within the soon-to-be-established ALB quarantine zone. The team also has access to the College of Charleston’s laboratory on the premises as well as opportunities for collaboration. Already, Biology Professor Brian Scholtens and Alex Quevado, a College of Charleston honors student majoring in biology, will be working on the ALB infestation in coordination with the USDA and David Coyle, assistant professor of forest health and invasive species at Clemson University.

Eradicating the Asian Longhorned Beetle in South Carolina will take many years. The mapping of the infestation is underway  and an environmental assessment of the area is nearly complete. Once there is a determination of any environmental impact, then an eradication strategy can be developed.

Featured image of an Asian Longhorned Beetle courtesy of the U.S. Department of Agriculture.