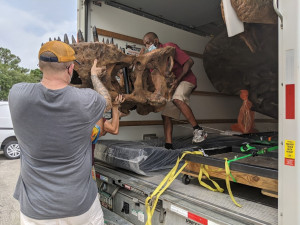 Ever notice how nothing shakes up a routine workday faster than the arrival of a Triceratops and a Tyrannosaurus rex to the office?

The four were working in Central Stores and Warehouse this summer when they received a phone call from the geology department. The truck carrying the cargo was too big for the loading dock at the School of Science and Mathematics Building, the geology department explained, asking if Gates would accept the shipment at the warehouse instead. He agreed. 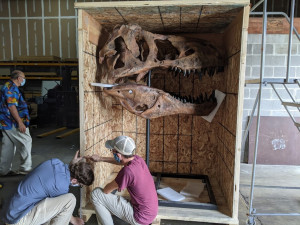 It’s not every day that a T. rex visits Central Stores. (Photo by Sarah Boessenecker)

“They gave us a heads-up that there was a shipment coming,” says Gates, fleet and supply manager in Central Stores. “We really did not know what it was at the time.”

When the truck arrived, the Central Warehouse team noticed several huge crates inside. But it was what was inside the crates, however, that made a huge impression: a Triceratops and a T. rex. And they were as big as … well … dinosaurs!

The traveling dinosaur models needed to be removed from their crates and carefully transported from the warehouse in North Charleston to the School of Sciences and Mathematics Building on the College of Charleston campus, where they would soon be housed in the Mace Brown Museum of Natural History. 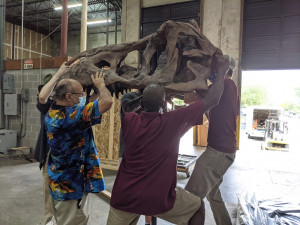 In what kind of sounds like a plot to a new Jurassic Park sequel, the Central Warehouse crew came up with a plan to get the dinosaurs safely to their new home.

“Although we are in logistics and transport, this was very unique,” Gates chuckles. “This is something that we definitely wanted to be extra careful with.”

“The effort was pretty awesome and not something our warehouse folks do on a regular basis,” says Wendy Williams, agent chief procurement officer. 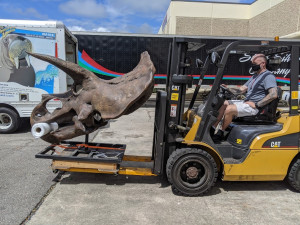 “Getting the Triceratops loaded into the truck was a particular challenge. It just marginally fit, and the forklift driver was really threading the needle,” says Scott Persons, assistant professor of geology and curator of the Mace Brown Natural History Museum. “As curator, I was biting my nails.”

But the crew pulled it off successfully!

“They got the dinosaur in safe and sound,” says Persons. “We could not have wrangled the dinosaurs without them!”

Tagged with: faculty and staff • mace brown museum of natural history • school of sciences and mathematics