The government has said that women do not need to vote since they’re all looked after by men. … How ridiculous! It’s London, it’s 1918, there’s a dangerous flu spreading, and the country is emerging from a long, difficult war. It’s the perfect time for women to agitate for the vote!

Join the College of Charleston’s Department of Theatre and Dance Oct. 1 and Oct. 2, 2020, as it celebrates the centennial anniversary of women’s right to vote in its season opener, How the Vote Was Won, a one-act farce by feminists/suffragettes Cicely Hamilton and Christopher St. John. The play will be performed in the College’s Emmett Robinson Theatre and presented to viewers via livestream.

A founding member of the Women Writers’ Suffrage League, Hamilton wrote the story as a satirical pamphlet published by the league in 1908. The pamphlet was an enormous success and prompted her to combine forces with St. John to turn it into a play. Since its debut on April 13, 1909, at the Royalty Theater in London, it has become one of the most well-known suffrage plays ever written. 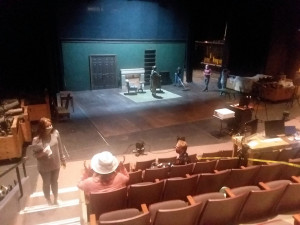 Behind-the-scenes of ‘How the Vote Was Won,’ which will be livestreamed to viewers.

The play focuses on the outlandish aftermath of Parliament’s statement that women don’t need a political voice because they are all looked after by men, when women leave their jobs and homes and instead insist upon support from their nearest male relatives. Hilarity ensues until the overwhelmed males band together to demand votes for women. And, to address the actors all wearing face coverings, the setting of the play has been shifted to 1918 to set it amid the backdrop of the flu pandemic of that time period.

Stuart Dowell, a senior majoring in theatre with a concentration in performance, plays Horace Cole, one of those beleaguered men initially set against women’s suffrage; but, with some prodding from his sister Agatha, eventually changes his mind.

“Horace Cole is a man who is really stuck in his ways. He likes to have his life all together the way he wants it,” says Dowell. “Throughout the play, however, we really see him begin to crack under all the pressure of not having everything going his way like usual. He just wants to keep up the appearance of being a proper Englishman.”

Gillian Huntley, a freshman majoring in theatre, plays Horace’s sister Agatha, whom she describes as “very independent” and “very dramatic about everything.”

RELATED: Get a behind-the-scenes look at the production of How the Vote Was Won.

“Being kicked out of the house at 18, not knowing what to do, and having no money made Agatha who she is,” says Huntley. “She made a life of her own and deserves the right to vote.”

In addition to learning their lines and positions on stage, Dowell and Huntley have had to adjust to the idea that there will not be a live audience and that their performance – which will be livestreamed using three cameras – will need to translate on screen. 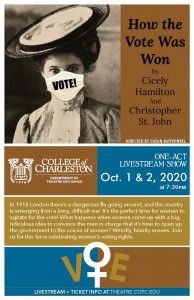 “What I think I’ll learn most from this experience is how to perform to an audience that I can’t really see,” says Dowell, noting that it has been very challenging to adjust to the lack of any live feedback from an audience. “I took an ‘acting for the camera’ class last semester, so I’m hoping that helps me a little bit! Along with that, this play is also a farce, so I’ve had to change the way I approach acting since it’s less realism and more exaggerated or heightened reactions and speaking.”

Huntley says the experience of performing in a livestreamed show while also wearing a mask has pushed her out of her comfort zone and challenged her to approach acting differently.

“I think this experience reminded me a lot of how I think a movie set or television set would be. I’ve had to learn to be patient with the cameras and all the technical adjustments,” she says. “Also, with us wearing masks, it makes it a little difficult to express our emotions without using our faces, so I think this really helped me use my body language more. With the masks hiding our expressions on our faces, we’ve really had to focus on showing our emotion with our voices, as well as our bodies.”

How the Vote Was Won is directed by Susan Kattwinkel, a theatre professor, who is excited about the opportunities the play has presented for students.

“This play is a delightful short farce, and we’ve found it to be a great play to experiment with all our new performance demands, like streaming and social distancing and masks. We decided that, instead of trying to work around those changes, we’d make them a part of the show,” says Kattwinkel. “We’ve placed the action of the show in London in 1918. That’s the year that some women won the right to vote in Britain, and it’s also the year of the flu pandemic. So, it’s not only the actors who are wearing masks and social distancing, it’s also the characters. That gave us the opportunity to find all sorts of humorous ways to play with props and movement. We think the result is a fun romp, and we hope you’ll join us for our experiment.”

DETAILS: Livestreamed performances will be held on Oct. 1 and 2, 2020, at 7:30 p.m. Admission is $8 for adults, seniors and military, and $5 for CofC students, faculty, staff and for those 18 and under. The performance may be viewed on demand until Oct. 17. Show and ticket information is available at showtix4u.com/events/cofcstages, by emailing cofcstages@cofc.edu or by calling 843.953.6306.

During this challenging time for the arts community, the Department of Theatre and Dance continues its season theme, “The Show Must Go On,” with the following fall productions: dance concert, “dance deconstructed”; Sophocles’ Antigone, adapted by Emily Mann; and student monologues, “Our World: Student Voices on 2020.” Tentative production details are listed and updated at theatre.cofc.edu.

Tagged with: department of theatre and dance • homepage-feed • school of the arts