New Truck at Grice Marine Lab Has Storied Past 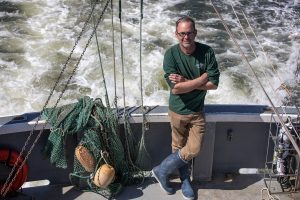 Car history reports are key when it comes to buying a used vehicle. But they don’t always tell the whole story. And, as Pete Meier found out when he went to Columbia last summer to pick up Grice Marine Lab’s new truck, sometimes the whole story is really pretty cool! Meier knew the 2012 Ford F-250 he’d found through the Federal Surplus Program was a good deal: It had low mileage and was in excellent condition. Most important: The price was right. It was the perfect replacement for the old F-150 – which, after years of towing boats and transporting equipment out at Fort Johnson, had deteriorated to the point of being unsafe to drive. And so, thanks to educational resource funds from the College of Charleston Department of Biology, Grice Marine Lab was about to get a new truck. As soon as Meier was dropped off in Columbia to bring it back to Charleston, he could see that this was not just any old new truck. 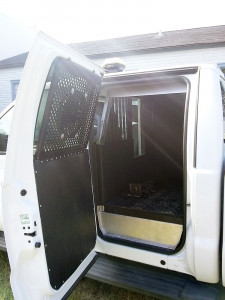 One clue that the new Grice Marine Lab truck had an interesting past: Instead of a backseat, it had a holding pen. (Photo by Pete Meier)

“They’d neglected to mention the custom features,” says Meier, the marine operations manager at Grice Marine Laboratory. First, the truck had a set of blinking law enforcement lights on top and a siren and a speaker on the side. Then, when he opened the back door, Meier saw that instead of a backseat, the truck had what seemed to be a holding pen with its own air conditioning. Under the cap, there was a customized box on tracks that appeared to hold some kind of specialized equipment. It all came together when he saw the faint remnants of a stenciled sign on the side of the truck: “Explosives Detection K-9 Unit.” “It had been a federal law enforcement k-9 explosive unit vehicle in its former life,” says Meier. “Kind of cool!” Even cooler: The truck has now been re-outfitted and is living its new life as a resource for marine science!