Class of 2020 Celebrates Commencement in a ‘Strange and Fitful Year’

A new journey always begins with an ending, and sometimes that ending isn’t quite as we imagined it to be. That was the case for the members of the Class of 2020, who officially marked the conclusion of their time at the College of Charleston during commencement exercises on Saturday, Oct. 10, 2020.

Four quiet ceremonies bubbling with the soft hum of optimism (and for the last ceremony, a little rain as well) recognized the graduates for their academic achievements and the futures they’ve already embarked upon in the months since the conclusion of their final semester at CofC. Due to rain, the fourth ceremony at 6 p.m. was abbreviated to allow for the recognition of all in-person graduates. 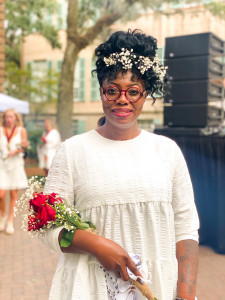 “The first part of our institution’s motto – Sapientia Ipsa Libertas – captures perfectly the spirit of what you need to understand. That is, “Wisdom Itself Is Liberty,” College of Charleston President Andrew T. Hsu told the graduates. “Wisdom is not knowing just facts and figures. It’s the ability to apply that knowledge in positive ways – ways that solve problems and move things forward. It’s knowledge in action. Wisdom is something that takes time and is hard earned and hard won. And you are now well on your way on that lifelong path.”

Although a scaled down ceremony due to the pandemic – no guests were allowed in order to meet state health regulations – it was a moment some graduates didn’t want to miss or push off to a later date.

“For me, it’s been a long road and the encouragement of my family and friends helped get me through the tough days and long nights,” said Kimberly McKinley, who majored in accounting and is working as a senior accountant with the Charleston Water System. “This accomplishment means the world to me.” 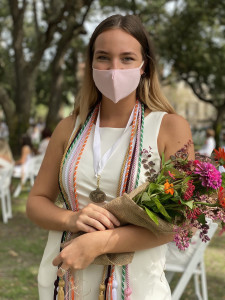 Mary Bruns, a double major in Spanish and foreign language education, is already well into her new life as a middle school Spanish teacher in Goose Creek, South Carolina, but her time at CofC, and the path that journey has set her on, was something she wanted to celebrate.

“Graduating from the College of Charleston is very special to me,” said Bruns. “With all of the uncertainty in the world today, I find comfort in knowing that I have been given the tools to be successful and make a difference.”

Ben Clemens, who celebrated earning an M.B.A., said having a moment to reflect and share the accomplishment with his classmates was important to him in a year filled with so many challenges and anxiety.

“For what’s been an up-and-down year, being able to participate in the commencement ceremony certainly was a premier moment,” said Clemens. “It was great being able to see my old classmates again and share with them a moment we’ve all worked so hard for. It’s very rewarding to conclude my time at the College with an exclamation point by making the fabled cross of the Cistern.” 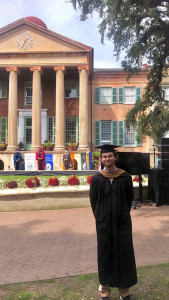 And although he’s not sure what’s next, Clemens is focused on enjoying the place where he finds himself now.

“At the moment, I am still on the job hunt, but currently work part-time with the Charleston Battery on match days,” he said. “So, hopefully they win tonight and earn a home playoff game!”

Commencement speakers Pulitzer Prize winning columnist Kathleen Parker and Bernard Powers, professor emeritus of history and founding director of the College’s Center for the Study of Slavery in Charleston, each offered messages of encouragement and perspective against the backdrop of what Parker called a “strange and fitful year.”

“Things do work out, we just don’t always get to choose when. We don’t get to control when we get things right,” said Parker, who spoke to graduates at the day’s first two ceremonies. She went on to say, “In other words, patience is not our strong suit. But patience is the one word of advice I would give to you today as you begin your next chapter in this life adventure. Patience, I think, may be the greatest virtue, no matter what your station or purpose in life. Not knowing – because then all possibilities are available – can be liberating.”

Ever the history professor, Powers drew on historical figures, including Booker T. Washington, Eleanor Roosevelt and George Washington, to offer graduates insight and a frame of reference for the challenges that lie ahead.

“Greatness is not automatic. Confidence sometimes fades. Doubts plague even the most highly accomplished men and women,” Powers told graduates during the 3 p.m. ceremony. “But when you have doubts – and you certainly will have them – remember [George] Washington and also Eleanor Roosevelt. And Eleanor would say that ‘you must do the things that you think you cannot do.’”

If anyone is capable of that it’s the Class of 2020. Congratulations, Cougars!

Tagged with: class of 2020 • commencement • homepage-feed