Cougar Votes Aims to Get Students Out to Vote

In recent years, Generation Z has been relatively removed from the political scene. Two College of Charleston Honors College students, Lucas Moyon and Grace Kern, are tackling this problem head-on and encouraging their fellow Cougars to register to vote.

The duo founded Cougar Votes, CofC’s only nonpartisan club dedicated solely to getting students registered to vote, in the spring of 2020. The club’s mission is simple: “Vote Safe, Vote Smart, Vote Strong.”

Despite the international pandemic and two unconventional semesters, the club has registered over 2,000 students and reached up to 35,000. 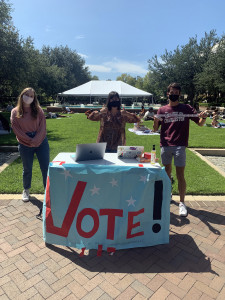 For Moyon and Kern, however, it’s not about the numbers – it’s about making sure that every College of Charleston student has the resources and knowledge to register themselves and others to vote.

“We [Generation Z] have the lowest voting rates in the country, and quite frankly, it is disheartening,” says Moyon, a sophomore triple-majoring in economics, physics and astronomy. “We’re the ones inheriting this country, so it is important that we are aware of the policies that are in place: After all, it’s our future.”

This is just one of the many reasons that voter awareness is important to Moyon, Cougar Votes co-founder and president.

And although there’s evidence that many members of Generation Z are politically active, there are some troubling statistics concerning college students and voter turnout.

“After doing a lot of research, we learned how hard it is to vote as a college student. Young people are not targeted. They are not spoken to in their own language, their own terms or their own turf,” says Kern, Cougar Votes co-founder and vice president, noting these are some of the factors as to why voter turnout is low among college aged voters. “If we can come and speak to students on their own level, it’s a game changer.”

Moyon and Kern are not alone in their quest to register CofC students to vote. Since starting Cougar Votes last January, the club has grown to roughly 25 active members. And the support doesn’t stop at students: the club has garnered support from faculty across the College, including David Aurich, associate dean of students, and Jeri Cabot, dean of students and associate vice president.

“The College has been extremely helpful during all of this,” says Kern, a sophomore double-majoring in international business and political science. “It is awesome to know that everyone is behind us and wants us to be as successful as possible. With the help of administration, we have been able to reach the student body in a way we wouldn’t have been able to do on our own.”

Cougar Votes has also received support through social media posts on many CofC accounts, which has helped increased the club’s reach immensely.

According to Moyon, the fact that Cougar Votes is student-led has allowed them to reach so many students. Connecting directly with the student body has made all the difference.

“The top down approach didn’t really seem to be working, so Grace and I wanted to connect students from all facets of campus,” he says. “Our member base is extremely interdisciplinary – we have members from all different majors. This has made it almost effortless to branch out across campus.”

Moyon and Kern also credit timing as part of the reason for their club’s success.

“There has never been a better time to embed ourselves into the infrastructure of the College,” says Kern. “There have been several campaigns from the College administration to get students registered in the past, but I think it really helps that we are students registering students.”

For resources on all things voting, contact Cougar Votes at cougarvotes@gmail.com and check out the organization on Instagram at @cougarvotes.

Jack Bartlett is a sophomore in the Honors College at the College Charleston. A native of Bristol, Tennessee, he is active with the Student Government Association, Charleston Miracle and serves as the social media and marketing director for the Center for Entrepreneurship.
Tagged with: campus life • homepage-feed • office of student life