Sitting in the atrium of the College of Charleston’s School of Sciences and Mathematics Building, you might get a glimpse of two fish kissing.

“They aren’t actually kissing,” explains Erica Schmidt, a senior majoring in marine biology and minoring in chemistry. “They are two males sizing each other up.” 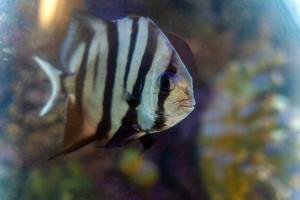 A spade fish swims in the aquarium in the School of Sciences and Mathematics Building.

All the creatures in the tank are local to Charleston harbor. In addition to snails and hermit crabs, Pete Meier, operations manager for the Grice Marine Lab, has supplied the tank with a spadefish, four pig fish, one snapper, one bank sea bass and one bandtail puffer.

“We’ll keep the number of fish in the tank to under 15 in order to manage the buildup of organic and inorganic toxins,” says Pound, who has worked for the South Carolina Department of Natural Resources and interned at the South Carolina Aquarium. “Spadefish like to swim in teams so Pete has two in quarantine that will be joining the fish we currently have.”

Schmidt and Pound come in on Mondays, Wednesdays and Fridays to maintain the tank. They keep a detailed log of what they do and observe, and confer with Taylor McLaughlin, a biology lab assistant who has experience maintaining fish tanks from volunteering at the South Carolina Aquarium. If they discover a fish has problems, they send it back to Meier for rehab.

“It’s so good to get hands-on experience in aquarium and saltwater management,” says Schmidt, who plans to work at an aquarium after graduation. “Many careers [in marine biology] revolve around keeping specimens in tanks, and it’s good to get practice learning about specific types of fish behaviors and the care required.”

One challenge Schmidt and Pound have experienced deals with waste management. The water filtration system first passes through a mechanical filter then to a reservoir before going to a protein skimmer, where a UV light kills any bacteria, viruses or algae. They found an inordinate amount of waste was being processed.

“All the fish like shrimp, but the skin and heads ended up going through the filters,” says Pound. “We tried other food, like krill, but they weren’t interested. Ultimately, we decided to peel the shrimp and cut them up, which has significantly reduced the amount of waste we process.”

Another challenge they have is managing the algae, bacteria and other gunk that grows on the coral. They have been trying a number of different solutions, including scrubbing it off. They found a fan blade brush that gets the gunk off, but unfortunately it has a very short lifespan given the texture of the coral. 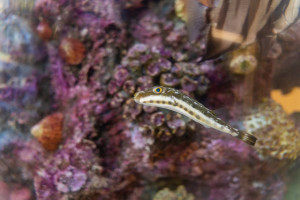 A juvenile bandtail puffer is among the species in the new aquarium. (Photos by Mike Ledford and Heather Moran)

Currently, their nemesis is a purple slime covering the coral. They originally thought it was cyanobacteria (commonly called Red Algae), but the snails, which typically eat cyano, have not taken to it. McLaughlin asked for a sample so she can share it with the biology department for analysis. Once they know what they are dealing with, they can figure out a solution.

And all these learning experiences are exactly what Sebastian van Delden, dean for the School of Sciences and Mathematics, envisioned when he accepted the fish tank.

Down the road, there are plans for a deep learning webcam. The idea is for computer science students to build artificial intelligence that can recognize and cross reference the species in the tank.

Van Delden is also using the aquarium as a way to increase awareness about marine biology to more students. He has coordinated a student shadow program so that Schmidt and Pound can share what they are learning with their peers.

“The spots filled up within a few hours,” says van Delden. “People are definitely interested.”

Followed her heart and it led her to College of Ch