They’re on our keyboards. They’re on our laps. And, even if you don’t have one, cats are even on our conference calls. Indeed – for many of us working from home – our feline friends are our closest colleagues these days.

As Cougars, the College community loves its cats. And, through Yammer posts and word of mouth, many of our faculty and staff members have given cats a place to call home.

That’s why, in celebration of National Cat Day, Oct. 29, we’ve asked some of our CofC cat fans to introduce their kitty colleagues to the greater Cougar community! 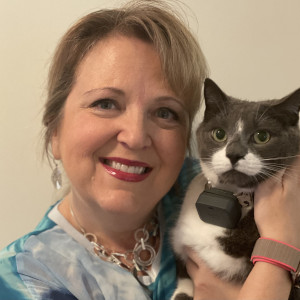 Jennifer Barhorst and one of her two cats, Buster

“My cats Buster and Oscar are both Scottish kitties who relocated with me from Scotland to South Carolina in 2016. They mean the world to me as they are terrific companions. A bonus is that I can try out new augmented reality experiences with them as well – as proudly demonstrated by Oscar.” 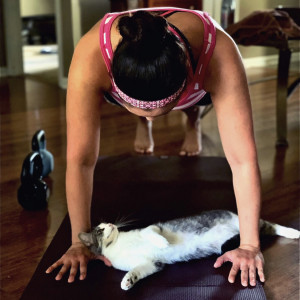 Sara Coleman and one of her cats, GiGi 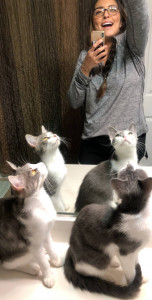 Sara Coleman and her cats, GiGi (left) and BiBi (right)

“GiGi Givenchy and BiBi Chanel are my two workout babies! They are true sisters, from the same litter. BiBi was the runt of the group. They both have a secret crush on Clyde the Cougar. I don’t think I could have really pulled through this pandemic if it weren’t for them. Aside from exercising, they were the best therapy ever. My favorite quote about cats is, ‘Dogs have owners, cats have staff,’ which always brings a smile to my face as a cat appreciator.” 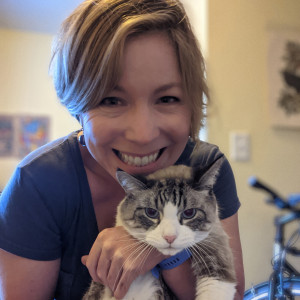 Susan Divine and her cat, Frank

“Frank Sinatra, like his namesake, has gorgeous blue eyes, is a heartbreaker and a bit of a rapscallion. I found him on Yammer! Brea Roy rescued Frank after someone threw him out of a moving car. My housemate and I fell in love with him, and Frank very quickly acclimated to two new humans and a dog. It was meant to be! The biggest lesson Frank teaches me is to set boundaries and enforce them (like he did right after this picture). Or maybe it’s that you can take a nap anywhere?” 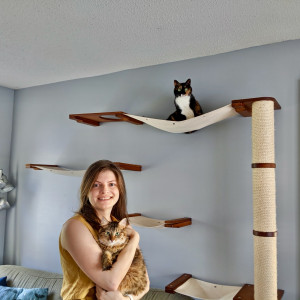 Amy Gordanier and her cats, Taura (in arms) and Elli

“Elli, our older cat, joined our household from the streets of Beijing while my partner and I were living in China for my graduate research. Beijing street cats all share a certain look, so her round little face regularly reminds me of the parks and historic sites of one of my favorite cities (many of which host well-fed colonies of community cats). Taura, the junior cat, appeared on our doorstep in Los Angeles shortly before we moved to Charleston and keeps Elli in shape with lots of daily cat aerobics. Elli is a solicitous writing and work-from-home companion, and Taura is always game to join in on Zoom calls and classes – whether she’s invited or not.” 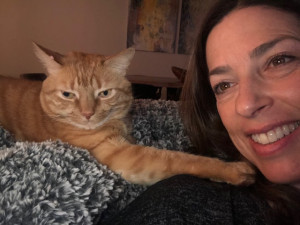 Sharon Siegel and her cat, Zach

“I was never much of a ‘cat person.’ Zach belonged to my husband, who I met about five years ago. It took me a good year to win both of their trust and affection! Zach is absolutely the sweetest, smartest, most affectionate guy, and I am officially a cat person.” 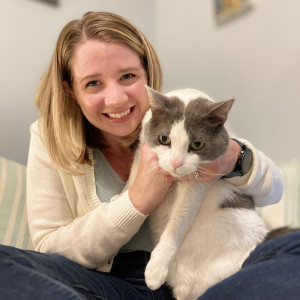 Sara Stevenson and her cat, Bongo

“Bongo has been my constant companion since he found me back in 2012, when I was a graduate student at the College of Charleston. He is an extremely empathetic cat and is acutely attuned to my emotions and overall well-being. If I am sad, sick or just sore from a hard workout, he always knows exactly what to do to make me feel better. Bongo enjoys belly scratches, staring out the window and begging for treats. He and Barley the dog are both enjoying the extra attention from having their humans at home all day, although the cat would never admit to it.” 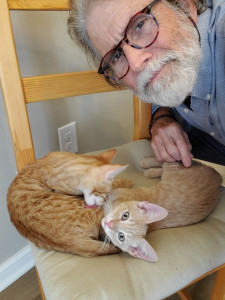 Jim Ward and his cats, Winnie (left) and Kaj

“My cats are brother and sister, just adopted about a month ago. Winnie (Winnifred) is the ginger hoyden and Kaj (Kajimer) is the tan and handsome blue-eyed boy. They are my company these days and provide a needed distraction from Zoom and sitting. They are quite a pair for energy and enthusiasm and a much-needed ‘humanizing’ companion in those Zoom classes: You never know when one will jump up onto the keyboard or lap or shoulder and say hello!” 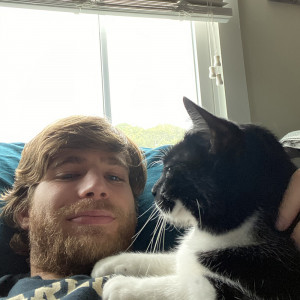 Zach Zaloumis and his cat, Octavia

“Her name is Octavia after Octavia from The 100. Octavia has a very fun personality. She likes to either fight or snuggle unless food is involved – she loves her food! She means the world to me, she’s the purrfect (sorry had to do it) pet. She’s a really sweet cat who really just wants to spend as much time with me as she can.” 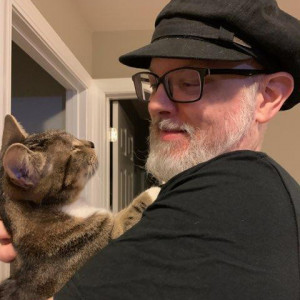 David Hansen and one of his five cats, Pipsqueak

“We have five cats – all rescues. Scratchy is our very friendly black cat who came from a Faculty and Staff Listserv post about the need for emergency adoption of cats that were going to get put out on the street the next day. It was also through the College – Yammer this time – that we found brothers that we call ‘the boys’ (all other cats are female): two orange-and-white cats named Chipper and Bowie. And then there’s Billie Idol, who was a stray we had been feeding for many years before capturing her and taking her in when we moved last year.

“But I decided to focus in on one – Pipsqueak. She is, as you see in the picture, very attached to me. She loves that I’m working from home now. When I was going to campus, she would cry and cry after I left.

“We adopted Pipsqueak when I connected to someone on the Faculty and Staff Listserv who helps find homes for rescues. We went to the woman’s house, and there were a lot of cats, but I was struck by the little cat in the bathroom window. Her name was Sputnik because she would run around the house fast. When we adopted her, we named her Pipsqueak because she’s both small and her meow is more like a squeak (or even a screech).

“She’s over 12 years old now, but still acts like a kitten sometimes. She’s full of energy and she still likes to cry a lot and run super fast. She is almost always in the room with me. She likes to jump on my desk and demand petting – even when I’m on Zoom conducting class or in a meeting. So, whenever you see a couple of tiny ears or tail popping up, that’s probably Pipsqueak.”

Tagged with: faculty and staff