By Alicia Lutz|2020-11-13T16:21:39-05:00November 2, 2020|Academics, All News|Comments Off on CofC Course Explores Charleston’s Role in Presidential Politics
Sometimes you’re just in the right place at the right time. And – for Jordan Ragusa’s first-year experience seminar on the unique role that Charleston and the College of Charleston have played in presidential politics throughout history – you can’t do much better than right here, right now. With this week’s historic election as its backdrop and the College’s 250th anniversary theme, History.Made.Here., as its framework, the course – Presidential Politics. Made. Here. – explores how our city and our campus have not just influenced presidential politics over the years, but have direct effects on presidential elections even today. 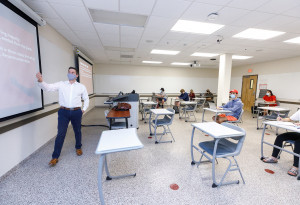 Thanks to a small class size, Jordan Ragusa teaches the seminar in-person for most of the semester. (Photos by Heather Moran)

“The course just barely scratches the surface of the many important topics that are at play here, but it is designed to whet students’ appetite for learning more,” says Ragusa, associate professor and associate chair of the Department of Political Science. “There are a lot of different pieces to the puzzle – and figuring out how those pieces go together to provide the entire picture of Charleston’s role in presidential politics was a challenge. But it was a labor of love.” Ultimately, Ragusa decided to divide the course into four parts, first focusing on three political institutions and Charleston’s role in their formation – slavery, the electoral college and political parties – and then examining key political ﬁgures with ties to Charleston and the College and how they shaped presidential politics. 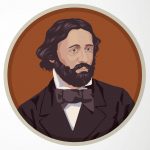 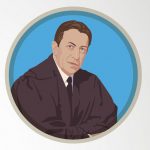 “One of the things that I try to do is point out that our connection to presidential politics isn’t always pretty and that there are ugly things we need to grapple with,” says Ragusa For example, explains Ragusa, Randolph Hall was built with slave labor and former CofC President George Grice (1945–66) took the College private to avoid integration. Both were critical features of American politics in their time period. But, he points out that, it isn’t all negative: CofC alumnus John Fremont (Class of 1836) was an outspoken opponent of slavery and became the first Republican nominee for president, and J. Waties Waring (Class of 1900) was influential in helping to overturn Plessy v. Ferguson, laying the groundwork for the 1954 Brown v. Board of Education decision. “So, on one side, we have a former College of Charleston president opposing integration; then on the other, we have an alum who was one of the most important figures in ending segregation in public education,” notes Ragusa. It’s a different way of connecting with and thinking about history – one that students seem to enjoy. “I think this class will give me a greater appreciation for the history of both the City of Charleston and the College of Charleston, as well as the importance of South Carolina’s role in presidential elections,” says Matthew Norton-Baker, a freshman from Myrtle Beach. “Learning about the history of a specific area can teach someone a lot about the politics of the past and the present. The better I can understand an important place like Charleston, the better I can apply that knowledge to our current political environment.” RELATED: Learn more about the College’s Top 25 history makers throughout the years. 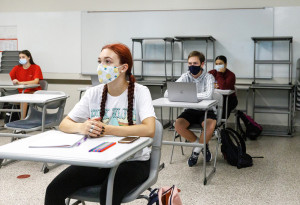 Students in the Presidential Politics course have the opportunity to explore Charleston, as well as the perspectives of faculty members across campus.

The third part of the course connects the past to the present, examining slavery’s legacy in contemporary presidential politics, as well as Charleston’s role in recent presidential nomination contests. Finally, the class reviews the basic elements of social science and students conduct quantitative research on contemporary presidential politics. “I want students to become critical thinkers, and I want them to have an appreciation for the usefulness of data in understanding the world. So, they’re going to try a lot of different things, and data analysis is part of that buffet,” says Ragusa, noting that the class includes reading texts by faculty from across campus. “We’re very fortunate at the College of Charleston to have dedicated teachers who care about their students and also write these very meaningful books about our shared history. I want to introduce students to faculty from across campus so that they’re exposed to different fields of interest – whether that’s history, English, sociology, political science or whatever sparks their curiosity and drives them to be lifelong learners. There are great and important things that have happened literally all around them – both here on campus and in Charleston – and I want them to appreciate those things and understand how they affect their daily lives.” 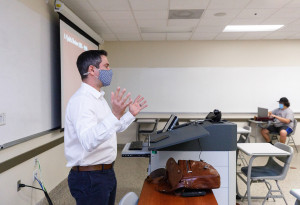 Student Lyncy Nicol is definitely intrigued by the history of Charleston and how that connects to issues of today. “I will most definitely not take the City of Charleston itself for granted and remember the rich history it provides,” says the Spartanburg native. “This class has shown me the significance of understanding our past history in politics and how important our own choices are when it comes to being educated and involved in politics.” After all, there is no better place or better time than right here, right now.