Above: The artwork of Tanja Softić is the inspiration for music major Abbey Shirey’s new composition. (Image courtesy of the Halsey Institute of Contemporary Art)

What inspires a writer, a musician or a dancer? Some seek inspiration in nature. Others are inspired by places and people. This semester, English, dance and music students were tasked with seeking inspiration from the Halsey Institute of Contemporary Art’s exhibition Dis/placements: Revisitations of Home, a virtual exhibition featuring 10 artists whose work deals with issues of displacement from their homeland.

Halsey associate director Lizz Biswell ’08 says the staff wanted the Dis/placements exhibition to function as a multifaceted digital humanities project. Each artist, whose work had previously been shown at the Halsey, was paired with a writer from the community who offered their response to the concept of home. Biswell and her team took the collaboration a step further by engaging students to create art based on the exhibition.

“By pairing the artists with writers, we’re able to offer another lens through which to consider the art in the exhibition. The more voices we could bring to the exhibition, the better,” says Biswell, referring to the student projects. “We wanted to find a way to build community via the online exhibition in the same ways that we do with our regular exhibitions. The Halsey Institute is thrilled to continue to act as a laboratory for creative thinking for the College community.”

Yiorgos Vassilandonakis, associate professor of music theory and composition, selected five students to create short musical compositions in response to the artwork. He says the essence of compositional training is about solving problems and the job of the artist is to figure out what they can do with what they have.

“A big component of this project was that recording had to be ‘do it yourself,’ which was the only option for online learning,” says Vassilandonakis. “Many of these students have been working on pieces since last winter, the premieres of which had to be postponed because of the pandemic. Partnering with Dis/placements has given students a finish line for their work this semester.” 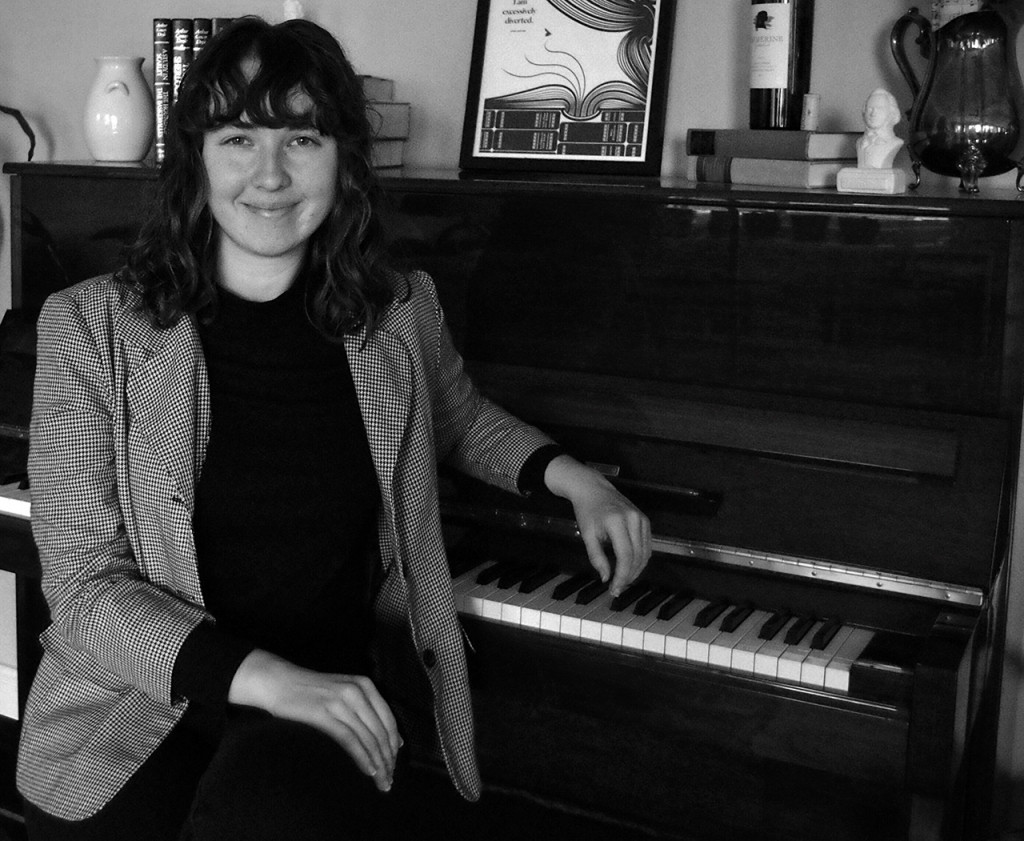 Abby Shirey is among a group of students using the Halsey’s Dis/placements exhibit as the basis for a new work within their own artistic medium. (Photo provided)

Music major Abby Shirey is composing a piano piece based on the artwork of Tanja Softić.

“Her collection focuses on growth and change, what it looks like to be uprooted and moving forward into the future. I’ve never felt more uprooted in my life during this season, so the composition process throughout this semester has been a very challenging and personal journey,” says Shirey. “I have gotten frustrated, excited, frustrated again, anxious, and have experienced scattered sparks of inspiration within this short period of time. Though it’s been tough, I can’t imagine composing a piece for a Dis/placements project without feeling displaced myself! I’ve never used art as inspiration for my compositions before, but this definitely will not be the last.”

Students in English 378, an undergraduate fiction course, took a Zoom guided tour of the exhibition with gallery project organizers and curators Bryan Granger and Katie Hirsch. They were asked to take note of an artist or artwork that spoke to them and write a short story, flash fiction, vignette or other prose piece based on those pieces. 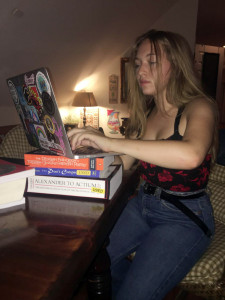 Reese Walker used elements of the Dis/placements exhibition to inspire her creative writing.

“The goal of the assignment is to get students looking at something and reacting to what they see and observe, rather than what they think they ‘know’ about what they are seeing,” says Anthony Varallo, English professor and director of undergraduate creative writing. “The point is to look around, notice things and be observant. As Henry James said, a writer is one ‘on whom nothing is lost.’”

“When you write about art that’s so vivid, but also fiction in itself, it creates a really intense multimedia blend, especially because your reader can’t usually see what you’re writing about, and you have to immerse them only with words,” says Walker, who is a student in the Honors College. “I think it really just makes a story come alive in a way that I haven’t really done before.”

Dance instructor Kristin Alexander says visual imagery is a great tool to prompt movement vocabulary and choreography. That’s why she selected senior dance major Lily Caggiano to create a recorded dance response to the exhibition for her senior capstone project. It’s an opportunity to stretch the meaning and delivery of dance in a new way.

“Having a creative outlet is essential during these challenging times and I don’t know if we would have embarked on filming dance if it wasn’t for the pandemic,” says Alexander.

Caggiano’s project is about her journey as a dancer. She plans to shoot the video in the Halsey’s gallery, moving through the space to include all of the artwork.

“I connected the musician’s intent, the artists’ intents and my own to build a piece around being taken away from your home and what happens if, or when, you are able to return to it,” says Caggiano. “While all of these artists’ work, including my own, seem to be inspired by different ideas, I find a striking connection between all of them and it has greatly inspired my work.”

Vassilandonakis, whose new opera was set to open earlier this year in his homeland of Greece, but was delayed because of the pandemic, predicts the world will have a creative re-birth when we emerge from COVID-19. In the meantime, various modes of CofC students’ creative expression from prose to music to dance will be added to the responses tab of the Halsey’s Dis/placements website throughout the semester. Virtual conversations with the artists will continue through Dec. 10, 2020.