As a crusader for study abroad and international education, Andrew Sobiesuo has taken the College of Charleston farther than it’s ever been, opening up every corner of the planet to its students and introducing the College to the world.

Indeed, the College’s study abroad programming has come a long way under his leadership as the director of the College’s Center for International Education (CIE) and associate provost of international education – and he is proud of where it is today.

During his tenure, the College of Charleston was ranked No. 3 in study abroad participation among the Carnegie Masters Colleges and Universities in the U.S. – and has had programs on every continent except Antarctica.

Sobiesuo himself has come a long way, too. 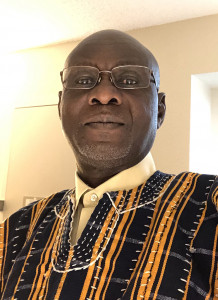 For most of his life, Andrew Sobiesuo has merged the traditional Ghanaian with the Western.

“My story is an unimaginable journey,” says the Ghanaian native, who grew up in a home without running water and the basic utilities. “My parents were peasant farmers, and neither my father nor mother had ever seen the four walls of the classroom. However, my father, somehow understood the value of formal education. So, when the opportunity came, he sent me to primary school.”

Truth be told, Sobiesuo’s path to education started out a little rocky – and he walked it barefoot, every day making the five-mile trek to St. Paul’s Primary School and back again over gravelly terrain.

“One day, I refused to go to school,” he recalls. Instead, he went and sat under a tree. “Before I realized it, my father was on his bike, cycling very fast. So I got up to run, but he ran after me, caught me and spanked me – the only time my father spanked me! And since that day I never missed school.

“It was through the example of my father – who said, ‘Son, you may not know everything, but whatever you are asked to do, you must do your best’ – that I am where I am today,” Sobiesuo continues. “That is the guidance I had: a father who never went to school who really understood the value of formal education and pushed me to do it.”

From there, the road to education smoothed out for Sobiesuo, eventually leading him to the University of Ghana, Legon, where he studied French, Spanish and philosophy. It was in his third year of university that he had his first opportunity to travel abroad, spending a year in Spain at the Universidad Complutense de Madrid.

“That was my first time traveling on a plane and traveling abroad,” he says. “That was my very first journey outside of Ghana. And the rest is history.”

After he completed his bachelor’s degree with honors, Sobiesuo was awarded a scholarship to pursue his graduate studies at the Universidad Complutense de Madrid. He decided, however, to finish up his master’s – and then pursue his doctorate – at The Ohio State University. After a couple of years teaching Spanish at Ohio Wesleyan University, Sobiesuo applied for a position at the College of Charleston.

“I always joke that I made the mistake of coming to Charleston in March, with all the azaleas blooming, and it looked perfect! The environment looked great, the weather was wonderful, and my colleagues in the department were very welcoming. It was like, ‘Wow, this is a great place for me!’” he laughs. “I realized then that this was the place I needed to be.” 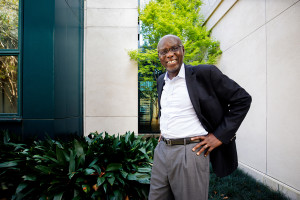 Andrew Sobiesuo joined the College’s Spanish department in 1990 and served as chair from 1998 to 2003, when he became the director of the Center for International Education. He has served as associate provost of international education since 2010.

And so Sobiesuo joined the College of Charleston faculty in 1990, playing an integral part in what was then the Department of Languages and the subsequent development of what would become the Department of Hispanic Studies. He took on the role as the department’s chair in 1998. Under his leadership, the Spanish program received a Commendation of Excellence from the S.C. Commission on Higher Education, the only Spanish program in the state’s history to receive such an honor.

In 2003, after 13 years in the classroom, Sobiesuo was named director of the CIE – and study abroad has since become one of the College’s distinctive qualities.

“When I came into this position, we had a few study abroad programs, but almost all of them focused on Western Europe,” says Sobiesuo. With the William E. Murray International Travel Grant, several faculty were funded to set up summer study abroad programs, which eventually resulted in an expansion of faculty-led study abroad opportunities to literally all corners of the world: from Canada to Argentina, Morocco to Rwanda, Russia down to Cambodia, Vietnam, Thailand and Indonesia, and all across Europe. “And not only that, we were able to set up programs that cater to the different academic disciplines, thanks to the faculty and a committed, dedicated staff at the CIE.”

In 2007, Sobiesuo became the College’s associate provost for international education, and student participation rates in all types of study abroad programs continued to soar.

Andrew Sobiesuo at the College of Charleston English Language Institute lunch in 2019.

“Creating opportunities for students to see the world – for students to get to know that there’s more beyond their own comfort zones – has been the highlight of my career at the College,” says Sobiesuo, who was awarded the International Education Administrator (IEA) Fulbright grant to the U.K. in 2013. He was again selected for the IEA Fulbright award to Germany in 2017. “I have always believed that when you leave what you’re comfortable with and immerse yourself in something so unfamiliar, you learn not just about the culture and the people, but about yourself. You learn to appreciate who you are and what you have. You’re putting these things into the context where you are, and it really helps your whole education.

“It can be something as enriching as the cultural integration, learning a lot more about the culture of that country, interacting with people,” he continues. “It could also be just simply the freedom that the students enjoy to go out and have fun with other students from different countries, meeting students of their age and doing things together on their own. So it’s a wide range of experiences that they go through.”

But, regardless of their experience, the impact is always profound.

“When they come back, you can see how much they have developed. And sometimes it’s that shy student who comes back just beaming with confidence because they’ve learned a lot about themselves and have learned to appreciate themselves and their own background,” he says. “One of the joys of this job is seeing the immediate impact study abroad has – that really is something we really cherish. So, it’s that kind of thing that I really will miss: sitting down and hearing them open up and talking about all the wonderful things that they have learned.

“I have been blessed to have had the opportunity to champion my passion while at the College of Charleston, to lead initiatives that have profound impacts on the lives of our students,” continues Sobiesuo, who hopes to be remembered as “somebody who rendered his best regardless of the circumstances, who cared about his students and was passionate about education abroad because of the positive impact it has on their lives and development as citizens of the world. But above all, somebody who loved his family, the cornerstone to his success in life.”

That is why – as soon as travel is once again permitted – Sobiesuo is making it a priority in his retirement to return to Ghana and spend time with his mother, who is now 95.

“Those are my immediate plans,” says Sobiesuo, who leaves the College confident that international education and study abroad will continue to flourish. “Study abroad is an important aspect of every institution. Because study abroad is one of the ways that we get to teach students about the other. It is one way we get our students to realize that we are really part of this global community.”

It is, in fact, how Sobiesuo himself came to be part of the College of Charleston community, too – and, he says, “It has been an incredible journey.”