It’s not often that the College gets a donation that’s out of this world, but that’s just the case – literally – with the gift Jim Phillips ’73 gave the College Libraries last December.

“The atlas is astonishing in its beauty and completeness, with all paper covers and tissue guards intact,” says Harlan Greene, the Libraries’ scholar-in-residence.

The six-volume atlas includes 48 heliogravures, images produced from a photographic negative transferred to a metal plate and etched in; overlaid transparent papers spotlight salient surface features. Complete sets are exceedingly rare, with only one other publicly accessible in the U.S. 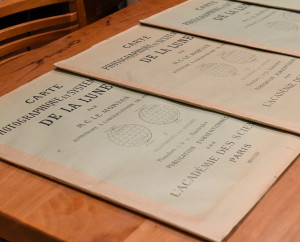 “The large-print format and fine detail of the photographs bring the Moon’s features up close,” says George Chartas, associate professor of astronomy and director of the College’s Observatory. “The light graininess reminds you of the pre-digital era, when photographs were taken with film cameras and developed in dark rooms.”

Upon its 1914 publication, the atlas represented the bleeding edge of lunar photography and scientific rigor. So striking are the atlas’ images, captured at the Paris Observatory, that it wasn’t only stargazers and scientists pulled into its orbit. Many artists were, too.

The atlas’s scientific significance isn’t limited to the early 20th century, either. When President John F. Kennedy promised to land a man on the moon, the question begged: Land where, exactly?

“Detailed photographs like these and others to follow were important in providing the accurate topology of
the Moon that would later allow humans to land safely,” says Chartas. “The atlas is still amazing to look through today and an important resource for our students.”

For longtime Friend of the Library Phillips, this lunar interest has featured prominently throughout his life.

“I was given my first telescope by my mom in September 1965,” says the semi-retired physician. “I have owned and used telescopes ever since. I have always kept journals of my observations.”

With a personal observatory in his downtown Charleston home, Phillips tracks and photographs the Moon daily. 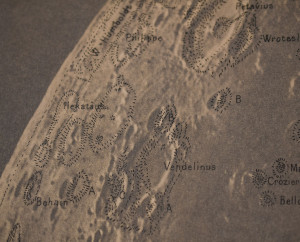 “When my wife and I were looking for a new home, my only requirement was that it have a southern facing window,” he says.

The atlas joins a large collection of original maps of the Moon from the 18th and 19th centuries previously donated by Phillips.

“I truly believe this collection of early lunar books and maps is one of the very best in the entire country,” he says. “There is something mystical about the Moon that captures the imagination of the public.”